Gov. Kim Reynolds delivered her third Condition of the State on Tuesday. The Daily Iowan analyzed statements in Reynolds' address. 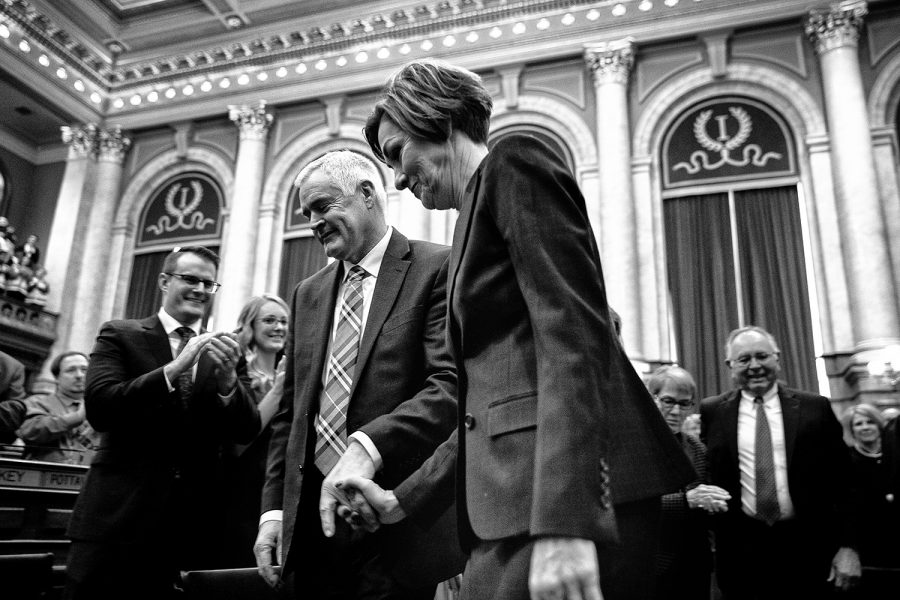 Gov. Kim Reynolds laid out her priorities for the upcoming 2020 legislative session in her annual address to lawmakers in Des Moines on Tuesday.

She touted a strong budget and low unemployment rate, and called for steeper income tax-cuts, a 1-cent sales tax and funneling money into conservation programs and Iowa’s mental-health system.

“Our cash reserves are full, wages are going up, and Iowans once again believe we’re headed in the right direction,” Reynolds said.

The Daily Iowan annotated and fact-checked claims Reynolds made in her pitch to lawmakers to enact her priorities.

How high was Iowa’s unemployment and budget deficit at the dawn of the decade?

“When this body met in January 2010, our unemployment rate was 6.4 percent. Just months earlier, our state faced a near billion-dollar deficit. School funding was drastically cut and Iowans were worried about their future,” Reynolds said.

With Tuesday’s speech being her first address of the new decade, Reynolds looked back at the last 10 years of Iowa government, characterizing the beginning of the decade as bleak and casting the last few years’ economies in a rosy light.

Iowa’s unemployment rate peaked at 6.4 percent in early 2010, according to a 2019 Iowa Workforce Development report.

Iowa’s was still lower than the nationwide jobless rate — 9.7 percent of Americans were unemployed in January 2010. Iowa was still in the top five states for lowest unemployment rate.

And on facing a near billion-dollar deficit, a February 2010 budget analysis by the nonpartisan Legislative Services Agency projected a $1.017 billion “spending gap” for state government to resolve heading into fiscal 2011. A state auditor found a $967 million gap.

His executive decision was in response to the budget estimates for fiscal 2010 being revised downward by 8.4 percent.

Iowa, by law, must have a balanced budget, meaning state government can’t spend more than it takes in, so the budget equalizes by the end of the year.

In 2010, the state auditor, a Republican at the time, wrote a report in which he said the governor’s budget relied on stop-gap proposals and one-time monies when considering his budget.

Iowa tied an all-time low unemployment rate in 2018 at 2.4 percent and state budgets have had surpluses the last two fiscal years. Her first year in office, 2017, Reynolds recommended budget cuts.

“Fewer doctors and fewer hospitals are delivering babies and providing care for mothers, especially outside our urban areas.”

Reynolds called for more Iowa budget dollars to go toward establishing publicly funded OB/GYN fellowships and expanding tele-mentoring in which OBs could consult with physicians across the state. As part of her appeal to lawmakers, she said maternal health care providers are on the decline.

Between 2000 and 2018, 34 community level hospitals have discontinued their maternity services, according to this year’s annual report to the Iowa Legislature.

However, in 2018, 66 counties in Iowa didn’t have a single practicing OB/GYN, while Johnson County (home to University of Iowa Health Care) had 30 and Polk County (the most populous county in Iowa) had 43. Most of those counties were rural — just one county the department classified as urban didn’t have an OB/GYN.

The report went through 2018 data. More recently, Unity Point Hospital in Marshalltown closed its maternity ward in September. In a statement to the Marshall Times Republican, the director cited declining births as the reason it shuttered its maternity ward.

“We have strong local control, rooted in communities and parents who care deeply about educating their children. We have the highest high-school graduation rate in the country and more high schoolers taking college courses than any other state,” Reynolds said.

Reynolds spokesperson Pat Garrett cited a National Center for Education Statistics report for academic year 2016-2017 for the top high-school graduation rate. Ninety-one percent of Iowa high schoolers graduated during that year. According to the Iowa Department of Education, those were the most recent rankings.

How many Iowa schools are teaching computer science?

“Currently, almost two-thirds of school districts teach computer science in middle and high school. And about half teach it in elementary school. We need that to be 100 percent — which is why I’m calling on the Legislature to take computer science statewide and ensure every student, at every level, has access to this new basic skill,” Reynolds said.

“One quarter of Iowa’s workforce requires some kind of professional license,” Reynolds said. “If that sounds like a lot, that’s because it is. It’s the second highest in the nation, which puts our state and its people at a competitive disadvantage.”

“A recent study shows that our licensing system cost Iowa 48,000 jobs and $290 million,” Reynolds went on to say.

Reynolds’ source for all the licensing statistics is the Institute for Justice, a libertarian nonprofit law firm and advocacy group. Its report ranks Iowa as 37th in the nation for burdensome regulations, with an average of $178 in fees, and 288 days of education or experience required to complete the license.

The organization has litigated cases in front of the U.S. Supreme Court on topics such as eminent domain and loosening restrictions on political donations from corporations. While a political leaning doesn’t disqualify the source’s information, the group advocates for reducing regulation and bureaucracy.

Its mission is to “litigate to limit the size and scope of government power and to ensure that all Americans have the right to control their own destinies as free and responsible members of society,” the website states.

A 2015 study done by the Brookings Institution found that one-third — 33 percent — of the state’s workforce had a license at the time. However, it didn’t say whether those were required licenses or not.

There were 119 occupations in Iowa in 2015 that required a license according to the Iowa Workforce Development’s Division of Labor. In 2019, there were 105 occupations.

What bipartisan support does licensing reform have?

“Licensing reform is a topic that has bipartisan support, but that doesn’t mean it will be easy. There will always be entrenched interests who benefit from overly burdensome regulations. But we can’t let those interests stand in the way of opportunity. These reforms are long overdue, and this is the year we will begin to fix a broken system,” Reynolds said during her address.

Garrett cited a measure that passed through the Arizona Legislature as a signal that licensing reform could appeal to Iowa lawmakers on both sides of the aisle. The Arizona governor signed off on a bill recognizing out-of-state professional licenses in April 2019. However, lawmakers in Iowa have yet to pledge their support on the record for the matter.