If lawmakers fund Gov. Kim Reynolds' fiscal 2021 budget recommendations, the state Board of Regent universities would see an increase of $15 million to their general funds — falling under their request for an additional $18 million. 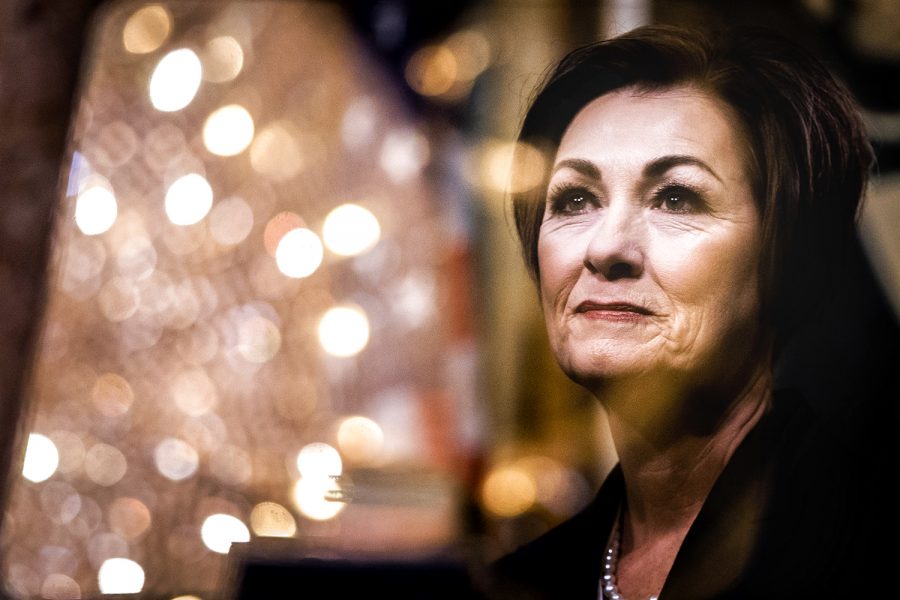 Gov. Kim Reynolds gives the Condition of the State address at the State Capitol on Tuesday, January 14, 2020. Reynolds discussed initiatives such as tax cuts, mental health funding, and workforce training.

DES MOINES — While the cash-strapped state Board of Regents universities tout their roles as economic engines for Iowa, Gov. Kim Reynolds has recommended the institutions receive a boost to their general funds of $15 million in fiscal 2021, according to her budget unveiled Tuesday — falling $3 million short of the regents’ request.

Under Reynolds’ recommended budget for the fiscal year beginning July 1, 2020 and ending June 30, 2021, the University of Iowa would see a $6.7 million bump, Iowa State University would receive $5.3 million more, and the University of Northern Iowa would get a $3 million increase. The regents have asked for a funding boost of $7 million each for the UI and ISU, and $4 million for UNI.

Regent Executive Director Mark Braun said in a statement that the regents and university leaders look forward to working with the governor and lawmakers in this legislative session to advocate for sufficient funding.

Rep. Vicki Lensing, D-Iowa City, said the UI is a university for the whole state and she hopes to see broader support under the golden dome for sufficiently funding the regent institutions.

“We really are a university for the state, and I think too often we get bogged down in debate where it’s the University of Iowa City is how our colleagues sometimes look at it,” she said of the UI, which would receive the largest share of appropriations compared with ISU and UNI if lawmakers fund the governor’s recommended budget. Reynolds’ recommendation for the UI fell around $300,000 short of the regents’ request for the institution.

“I think sometimes [lawmakers] just don’t appreciate the benefits of funding any regent university that it’s a plus for the entire state — no matter which of the universities it is,” Lensing said.

While Braun said the regents appreciate Reynolds’ “continued support” for the institutions, several Democratic state lawmakers representing Johnson County in the Statehouse told The Daily Iowan Tuesday after Reynolds delivered her Condition of the State address that they noted her remarks lacked any mention of the universities.

Instead, she called for supporting other means of workforce preparedness — promoting her Future Ready Iowa initiative to prepare 70 percent of workers with training or education beyond high school by 2025.

She also recommended a $2.8 million boost in funding for the Last Dollar Scholarship, a financial aid component of Future Ready Iowa that currently helps more than 6,000 Iowans — high-school graduates and adult learners — cover the costs of attending college.

Rep. Mary Mascher, D-Iowa City, said Iowa needs to be an attractive place for skilled laborers to live, and the regent universities are critical to addressing the state’s worker shortage.

“We lose a lot of our college graduates once they graduate from college, and they move on to other jobs in other states where they can pay off their student loans quicker,” she said.

Because state lawmakers often allocate different amounts of appropriations than the governor recommends in any given budget year, Mascher said she worries a $15 million increase in support is the best the regents could hope to see for fiscal 2021. She said she anticipates funding falling short of Reynolds’ recommendations.

“That worries me a great deal in light of the fact that our regents are looking for ways to make sure they can keep the faculty and staff they have to be able to provide the quality for the students who go there,” she said. “We’re only as good as our staff and our quality faculty because students want to go to a place that has a good reputation and that they know they’re going to get a quality education out of that system.”

Lensing said tuition increases can’t be the only answer for the universities. The regents in 2018 passed a tuition model aimed at making tuition hikes more predictable for students and families, laying out a baseline range of increases that hinges on the appropriations lawmakers provide.

“I feel like we have to fight for top dollars for the university every year,” Lensing said. “It doesn’t get easier.”

Learning that Reynolds was not recommending fully funding the regents’ requests for an $18 million increase to the universities’ general-fund budgets disappointed Rep. Bobby Kaufmann, R-Wilton, he said, but he added that he would like to see lawmakers back their request.

The lawmakers interviewed by the DI said in light of the regents recently signing off on the UI’s $1.1 billion agreement with private entity Hawkeye Energy Collaborative, the newly formed concessionaire composed of French firms ENGIE and Meridiam, to operate the campus utility system, they had higher hopes for Iowa’s higher-education funding outlook.

“I was hoping that she would have fully funded the regents in light of the fact that she’s been so supportive of the P3,” Mascher said.

He expressed concerns at a legislative forum hosted by the DI in December just days before the regents signed the agreement that this could incentivize lawmakers to provide less funding to the public universities, as the partnership proceeds are expected to grow to $3 billion in a new endowment fund over the 50 years of the agreement.

“I would hope that the Legislature can say, ‘Well, the Board of Regents did what we asked them to do. Let’s give them what they’re asking us to do,’ ” Wahls said. “Seems easy to me.”

In response to those concerns, UI President Bruce Harreld said at a Faculty Senate meeting on Dec. 10, the day the regents approved the agreement, that there’s power in casting a ballot and voters could make higher-education funding a key issue when they consider who to support.

“I want to remind you that everyone in this room is a voter,” Harreld said. “And I think it’s about time we stand up and start asking people who are running for office, ‘What’s your point of view on public higher education, and are you willing to fund it?’ ”