Iowa Gov. Kim Reynolds said the state Constitution should clarify that the state's governing document "does not grant a right to an abortion" in her third Condition of the State address. 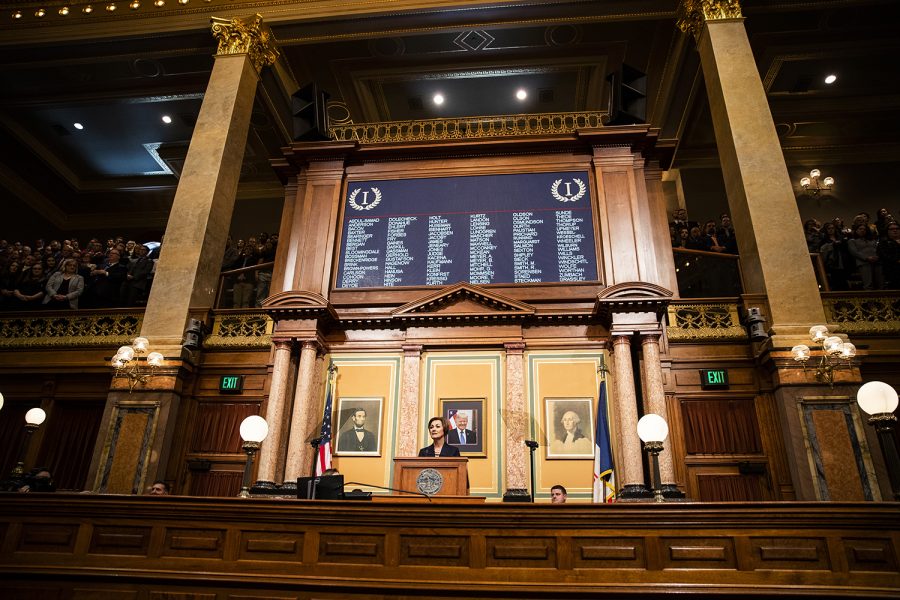 Gov. Kim Reynolds speaks during the Condition of the State address at the Iowa Capitol in Des Moines on Tuesday, Jan. 14, 2020. Reynolds discussed initiatives such as tax cuts, mental-health funding, and workforce training.

DES MOINES — After GOP legislative efforts in recent years have aimed to restrict abortion access, Iowa Gov. Kim Reynolds in her third Condition of the State address on Tuesday called for an amendment to the Iowa Constitution stating that the document does not protect the right to an abortion.

“As we begin 2020, I’m focused on the overall wellness of all Iowans, in every part of the state, in all stages of life,” she said during her remarks delivered Tuesday in the House chamber of the State Capitol. “And when I say all stages of life, I mean to include the unborn. We must protect life by making clear, through an amendment, that our constitution does not grant a right to an abortion. It’s time, and unfortunately it’s necessary.”

Her remarks come after Iowa Republicans of both legislative chambers introduced joint resolutions in 2019 proposing an amendment to Iowa’s Constitution stating that Iowa “does not secure or protect a right to or require the funding of abortion.”

Gov. Reynolds in her Condition of the State remarks calls for an amendment to the Iowa Constitution clarifying it does not protect the right to an abortion. Follow @TheDailyIowan today for the full story and more from the State Capitol. pic.twitter.com/PqCBtl5fEZ

The House proposal never made it to a subcommittee meeting, and the Senate version made it out of the State Government Committee but never came to a vote in the chamber.

Iowa Republicans have set their sights on a constitutional amendment following a state judge’s ruling in January 2019 striking down a fetal-heartbeat bill as unconstitutional. The legislation, signed in May 2018, would have banned doctors from performing an abortion after the detection of a fetal heartbeat, which can happen as early as six weeks into a pregnancy — before many women know they are pregnant.

Implementation would be challenged because of the U.S. Supreme Court’s Roe v. Wade decision, which protects the right to access an abortion without excessive government restriction. Republicans in other states such as Georgia and Ohio have passed similar fetal-heartbeat bills in hopes of prompting a court battle that pro-life lawmakers hope could ultimately overturn the federal ruling that currently enshrines abortion access as a constitutional right.

Rep. Mary Mascher, D-Iowa City, told The Daily Iowan after Reynolds’ address that she thinks a constitutional amendment would be “an enormous overreach.”

“I do not think Iowans are there any longer,” Mascher said. “I think Iowans believe that we should do everything we can with making sure people have family-planning dollars.”

A Des Moines Register/Mediacom Iowa Poll conducted in September 2018 showed 52 percent of Iowans believe the fetal-heartbeat law went too far, and 39 percent thought it was appropriate. Ten percent reported they were unsure.

Funding should support family-planning services and access to birth control instead to reduce abortions by preventing unwanted pregnancies, Mascher said.

Enrollment in family-planning services has dropped in Iowa since 2017 when a state-operated family-planning program was created to bar Planned Parenthood from receiving government funds. The program has had a nearly 75 percent drop in the number of people using its services since 2017, the Register reported in December 2019, citing a Department of Human Services report.

Mascher said Democrats are working to elect more members of their party in 2020 to take back control of the Iowa House and avoid such proposals landing on the ballot.

“In terms of having it in the Constitution, I just do not believe that the state would go back to the days where it was illegal and that women were getting back-alley abortions and dying because they couldn’t get the care and the services they need,” she said.

Rep. Bobby Kaufmann, R-Wilton, said he thinks pro-life and pro-choice voters would be interested in seeing the issue on the ballot when they head to the polls.

“What [Reynolds is] saying is she wants to give Iowans a chance to vote,” he said, refraining from endorsing potential legislation calling for an amendment. “I traditionally side with Iowans should have an opportunity to express their voice. They might express their voice that Iowa’s going to be a pro-choice state… That’s for the voters to decide.”

After calling for a constitutional amendment restricting abortion rights, Reynolds said in her address that more must be done to support maternal health.

“Fewer doctors and fewer hospitals are delivering babies and providing care for mothers, especially outside our urban areas,” she said. 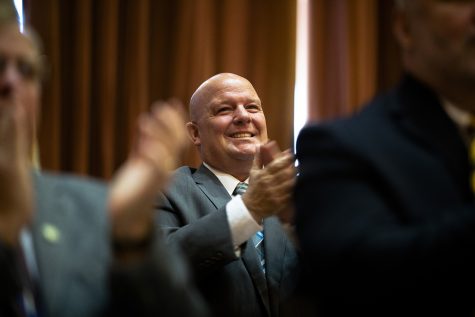 She proposed a fellowship for new family-practice physicians who want to train and specialize in OB care, allowing four new residents to complete the program and provide care to mothers and babies in their communities. Additionally, she said Iowa is launching a tele-mentoring system where OBs can consult with physicians across the state.

Sen. Zach Wahls, D-Coralville, told the DI he anticipated support for such a constitutional amendment would fall along party lines. He said reactions to Reynolds’ proposals across the House chamber Tuesday morning seemed to be a reliable indicator of support for the governor’s proposals.

“I thought it was very telling that Republican legislators heard that and hooted and hollered, leapt to their feet immediately and started applauding,” he said. “But then, a moment later today, said we are going to support maternal health in the state of Iowa, make sure that we’re supporting the mothers who are giving birth to the babies. They eventually got on their feet to applaud, but it took them a little while.”