Garza leads the way in Iowa’s win over Northwestern

The Hawkeyes improved their conference record to 3-3 with a 75-62 victory over the Wildcats. 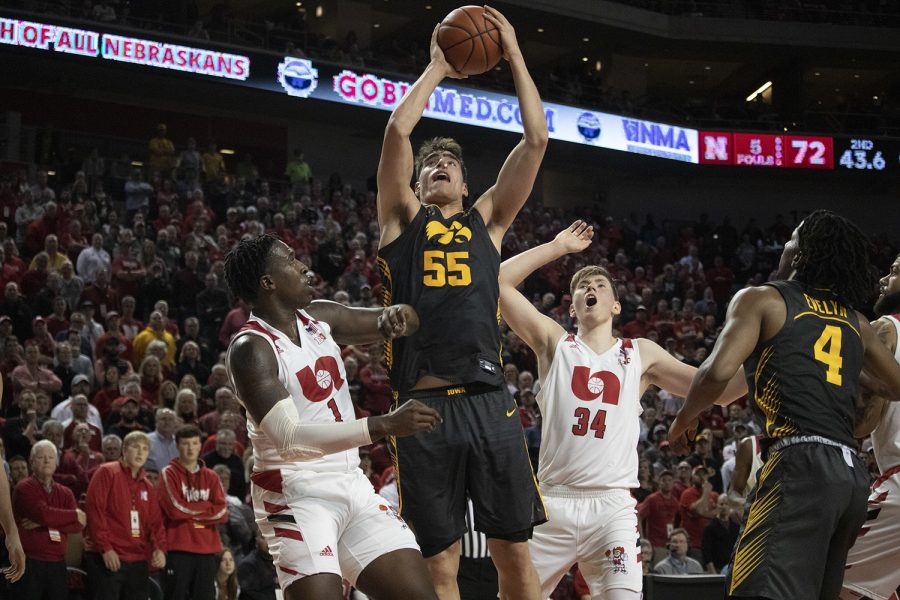 Iowa center Luke Garza rebounds a ball during a men’s basketball game between Iowa and Nebraska at Pinnacle Bank Arena in Lincoln on Tuesday, January 7th. The Hawkeyes fell to the Huskers 76-70.

There’s no stopping Luka Garza, only the hope of trying to contain him.

Northwestern could not do so Tuesday night.

The Iowa men’s basketball team improved its record to 12-5 on the year and 3-3 in the Big Ten with a 75-62 victory over Northwestern. Garza got things going for Iowa right from the start.

The junior center scored Iowa’s first 10 points of the game, but got in foul trouble early which sent him to the bench.

Iowa took a 41-35 lead into halftime, but Garza took over in the second half.

In a span of only five minutes and 10 seconds, Garza scored 17 points to pull Iowa out of reach of the Wildcats. He netted 14 consecutive points during that stretch.

The time Garza spent on the bench between his scoring stretches may have helped him in the long run.

“He was fresh because he was out of the game for so long, and that helps.” Iowa head coach Fran McCaffery said. “He was able to kind of watch how they were defending. He’s a student of the game, he’s studying. And then of course we made a concerted effort to get [the ball] to him.”

Freshman guard CJ Fredrick also contributed from 3-point range for the Hawkeyes. Fredrick suited up after missing Iowa’s previous two games with an injury and contributed 11 points and a career-high five assists.

“He obviously gives you another 3-point shooter, but it’s so much more than that,” McCaffery said. “He’s a post-feeder. He moves the ball. He’s a very intelligent defender, always in the right place.”

The sharpshooter went 3-of-7 from beyond 3-point range.

As a team, Iowa hit 10 3-pointers. It is the seventh time this season the Hawkeyes have drained 10 or more triples.

Seniors Ryan Kriener and Bakari Evelyn sparked Iowa off the bench, especially when Garza was out of the game. Kriener scored 10 points, making four of his five shots. He also recorded five rebounds.

“[Evelyn] is a fifth-year guy,” McCaffery said. ” He’s a really good player. He can handle [the ball], he can shoot it, he can drive it. He can play three positions. He’s a very smart player. We’re really very fortunate to have him, especially this year with all of our injuries. We can plug him in anywhere.”

Iowa returns to Carver-Hawkeye Arena Friday to face off against No. 19 Michigan. Tip-off is scheduled for 8 p.m.