A.J. Epenesa, a likely first-round pick, will forgo his senior season at Iowa to enter the NFL Draft. 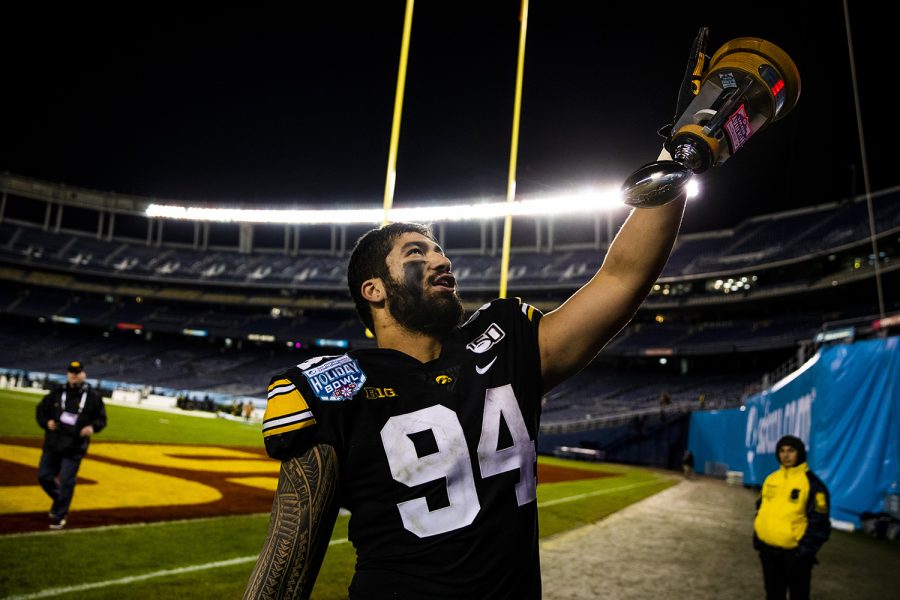 Iowa defensive end A.J. Epenesa displays his Defensive MVP award to his family during the Holiday Bowl game between Iowa and USC at SDCCU Stadium on Friday, Dec. 27, 2019. The Hawkeyes defeated the Trojans, 49-24.

Hawkeye defensive end A.J. Epenesa will leave Iowa before his senior season and enter the 2020 NFL Draft, he announced Tuesday on his Instagram page.

Epenesa is widely regarded as a first-round pick.

“Over the last three years I have had the amazing opportunity to play for the University of Iowa,” Epenesa wrote in his post. “I got to live my childhood dream and represent the Black and Gold. After long discussion with my parents and loved ones I have decided to follow another childhood dream and enter into the 2020 NFL Draft.”

Epenesa posted a career to remember during his time at Iowa.

The Glen Carbon, Illinois, native upped that number to 11.5 in 2019. After a slow start to the season, Epenesa racked up six sacks, 10.5 tackles for a loss, and four forced fumbles in his final five games.

Epenesa went out with a bang, picking up 2.5 sacks, 1.5 tackles for a loss, and a forced fumble in Iowa’s Holiday Bowl win over USC en route to taking home Defensive MVP honors.

In addition to his 11.5 sacks in 2019, Epenesa concluded the season with 14.0 tackles for a loss, three passes defended, and four forced fumbles.

In his three years with the Hawkeyes, Epenesa recorded 26.5 sacks, 36.0 tackles for a loss, 101 total tackles, and nine forced fumbles.

Epenesa became the second Iowa defensive end in two years to leave early for the draft, as Anthony Nelson did the same thing last year. Nelson was selected in the fourth round of the 2019 NFL Draft by the Tampa Bay Buccaneers.

In his post, Epenesa thanked Iowa ahead coach Kirk Ferentz, along with UI staff members, including the training staff, media, and secretaries. He also made sure to include his parents, teammates, and Iowa fans.

Epenesa joins safety Geno Stone on the road to the NFL, which leaves only offensive tackle Tristan Wirfs’ decision.

“My time at Iowa has been everything I dreamt it would be, and I couldn’t be more grateful and proud to have been given the opportunity to be a part of the Swarm and play in Kinnick Stadium in front of 70,000 Hawk fans,” Epenesa wrote. “I will never forget the many great memories that have come from Iowa!”