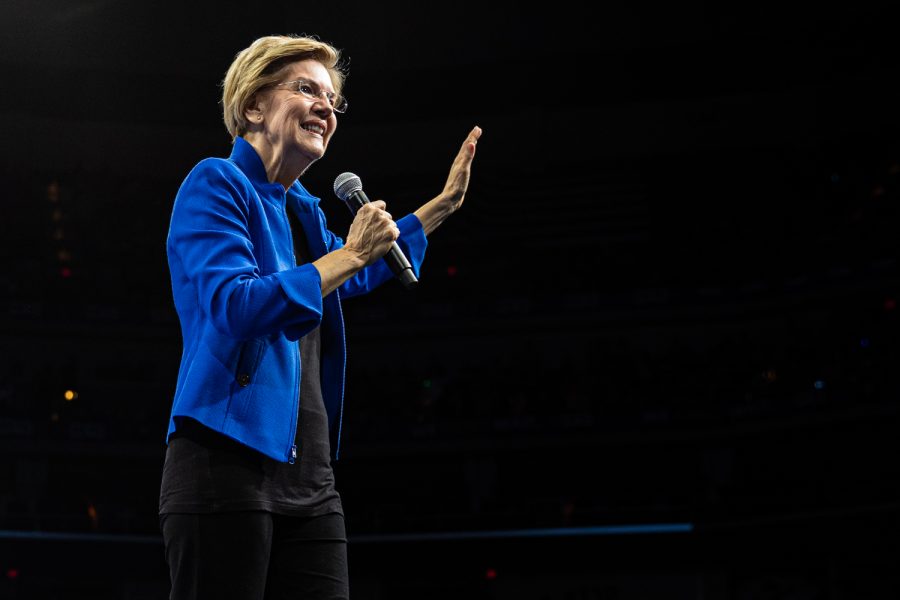 Sen. Elizabeth Warren, D-Mass., speaks during the 2019 Liberty and Justice Celebration at the Wells Fargo Arena in Des Moines on Friday, November 1, 2019.

Presidential hopeful Elizabeth Warren announced Tuesday her plan to implement her student-debt cancellation program without Congress through existing laws in the Department of Education.

As a part of the executive branch, Warren would direct the department to begin canceling student-loan debt largely by eliminating bureaucratic red tape. She argues the department is within its capabilities to waive more federal student debt if they’re directed to.

She said she would utilize existing capabilities in the Department of Education to forgive some student debt in line with her broader student-debt cancellation policy.

“So I will start to use existing laws on day one of my presidency to implement my student loan debt cancellation plan that offers relief to 42 million Americans — in addition to using all available tools to address racial disparities in higher education, crack down on for-profit institutions, and eliminate predatory lending,” Warren said in her plan.

Her current plan calls for the cancelation of up to $50,000 of debt for about 42 million people who currently have student-loan debt, about 95 percent of borrowers. In the plan released Tuesday, she wrote that she would continue to advocate Congress to implement her two-cent wealth tax, which she plans to use to offset her broad student-loan debt cancellation plan.

According to her new plan, students can maximize the amount of student-loan debt forgiveness by “simplifying the application processes, encouraging borrowers to apply, clearing out backlogged applications, using available data to match borrowers with their discharge options, automatically cancelling debts, discharging loans for groups instead of requiring individuals applications, and fixing any adverse effects of the debt on borrowers’ credit history.”

The note added that she would ensure the debt cancellation would not result in any additional tax liability.

Another measure Warren said she would take is directing the Secretary of Education to limit for-profit colleges and predatory student lending, as well as address racial disparities in higher education. Warren noted in her plan that “half of black borrowers and a third of latinx borrowers default on their loans within 20 years.”

Warren’s current plan calls for a fund of $50 billion to be dedicated to Historically Black Colleges and Universities.

In a Dec. 2 interview with The Daily Iowan, Warren said the Department of Education has the capacity to manage a massive student-loan debt cancellation program without having to hire more people. She said she would refinance private loans as federal loans and streamline them into a single system.

She included a letter signed by three officials with Harvard Law Center. Those officials found that the Department of Education does have the authority to begin cancelling student-loan debt for about 42 million people without Congressional approval.

“We conclude that your proposal calls for a lawful and permissible exercise of the Secretary’s authority under existing law,” the letter said.