Republican state Rep. Pat Grassley opened the 2020 legislative session, his first in the Iowa House's top leadership role. He laid out his priorities Monday morning for the upcoming session, which include cutting taxes and building on initiatives like Future Ready Iowa. 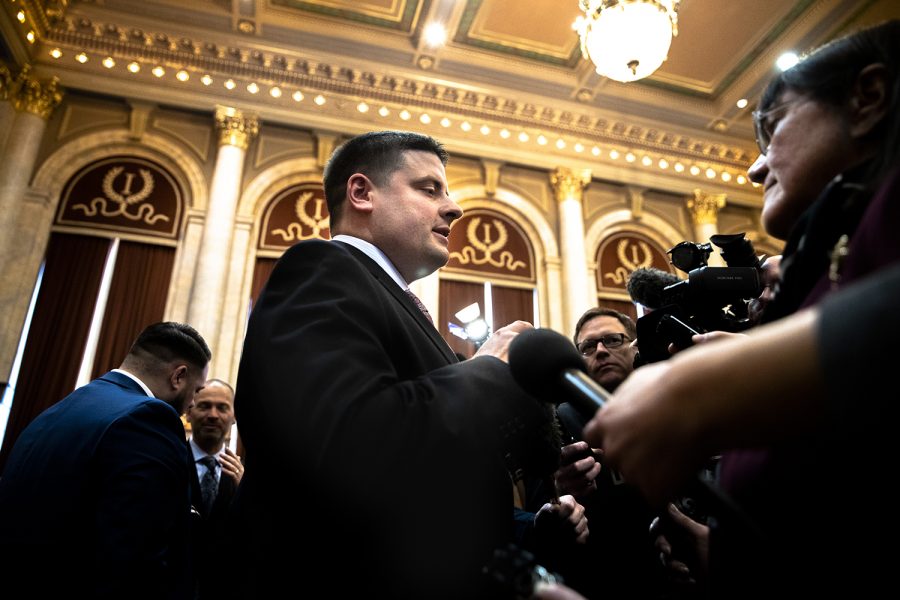 Newly elected Iowa House Speaker Pat Grassley, R-New Hartford, speaks to the media at the Iowa State Capitol on Monday, January 13, 2020. The House convened and leaders in the Iowa House of Representatives gave opening remarks to preview their priorities for the 2020 session. (Katina Zentz/The Daily Iowan)

“This session, I want to show Iowans that we are not like our counterparts in Washington, D.C.,” Grassley said during his remarks to the Iowa House of Representatives on Monday. “When there are opportunities to work together, we actually do work together.”

Grassley, a Republican from New Hartford, was sworn into the Iowa House’s top leadership position Monday morning, escorted by his grandfather, U.S. Sen. Chuck Grassley, R-Iowa. Former Republican House Speaker Linda Upmeyer resigned her position in the fall of 2019, but will serve out the rest of her term in the House.

Speaker Grassley championed Iowa’s unemployment rate of 2.6 percent and high wages for middle-class families. The median household income among middle-class families in Iowa is about $76,000, according to the office of Iowa Gov. Kim Reynolds. But, Grassley said he wants to make it easier for Iowans to enter the workforce and to maintain steady careers.

Grassley said he wants to build on Reynolds’ Future Ready Iowa initiative she signed off on last year, which invested $16 million in new funding for scholarships for two-year postsecondary degrees in an effort to train students for high-demand jobs. Grassley also said that affordable child care programs will be crucial in helping people maintain jobs, and that he expects there to be a bipartisan solution.

“Future Ready Iowa was already making a difference in attacking the skills gap with the help of the Last Dollar scholarship program, but that isn’t enough,” Grassley said. “We must continue our efforts not only by building a skilled workforce, but by attracting and retaining top talent to the state.”

Grassley said that he’s proud of the discipline and restraint his caucus has shown in crafting the budget over the years. In 2018, Reynolds signed what her office billed as the largest tax cut in Iowa’s history. Iowa families saw an average annual decrease of about $300 in their state taxes.

“We’ve made smart investments in priorities like K-12, workforce training, and public safety, all while lessening the tax burden on the hard working guy with families and small businesses,” Grassley said.

The largest share of the 2018 tax cuts benefited the wealthy, according to a report from the Associated Press.

“As we move forward this session, we will once again pass a conservative budget that funds our priorities in a responsible way,” Grassley said. “House Republicans will continue to exemplify the strong leadership of the state budget that Iowans expect.”

At a December legislative forum hosted by The Daily Iowan with Johnson County area lawmakers, the six Democrats in attendance characterized the $289 million budget surplus as a result of Iowa Republicans neglecting social services.

Iowa Senate Majority Leader Jack Whitver, R-Ankeny, said in a December interview with the DI that the budget surplus gives Republicans another opportunity to look at tax reform, but that their number one priority is to have a balanced budget.

Iowa Sen. Joe Bolkcom, D-Iowa City, said in an interview after Grassley’s remarks that while workforce training needs to be addressed this session, some issues are long overdue to fix, such as raising the minimum wage. The minimum wage in Iowa is currently $7.25, the same as on the federal level.

“If people don’t have enough money to pay for child care, maybe they need a wage increase that we turn to taxpayers to fund,” Bolkcom said. He added that he wants to use the budget surplus to invest more into public schools and state universities.

Iowa Rep. Bobby Kaufmann, R-Wilton, said raising the minimum wage is a moot point because most businesses pay employees more than $7.25 per hour. 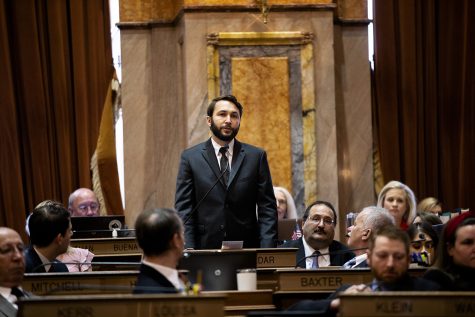 Katina ZentzIowa Rep. Bobby Kaufmann, R-Wilton, speaks at the Iowa State Capitol on Monday, January 13, 2020. The House convened and leaders in the Iowa House of Representatives gave opening remarks to preview their priorities for the 2020 session. (Katina Zentz/The Daily Iowan)

“When you’ve got jobs to fulfill that are easily trainable — and we’re going to focus on raising something to a wage that’s half of what is already being offered?” said Kaufmann, the only Republican state lawmaker in Johnson County. “Doesn’t make any sense to me.”

Kaufmann, chair of the state government committee, said that while he agrees that investing in workforce training should be a priority, he is more focused on making child care more affordable. But, he said he’s unsure where the funding would come from. He said House Republicans have a strict rule that they don’t pay for ongoing expenses with one-time money, like the budget surplus.

Kaufmann said he does not believe that tax cuts disproportionately favor the wealthy, because the cuts encourage business owners to invest back into their employees and the community.

“So I just disagree with some of my colleagues in Johnson County … I would say that philosophically, I believe, that (tax cuts) cause businesses to reinvest, create jobs, help the local economy, etc, etc,” Kaufmann said.

Iowa House Speaker Pro Tempore Matt Windschitl, R-Marshalltown, encouraged lawmakers in his remarks to look for opportunities to cross the political divide. He also said that while Iowa is in a good position financially, there are still improvements that can be made to bolster Iowan’s civil liberties.

“Let us strive to find new and innovative ways to make Iowans free — free from burdensome government regulations — free from an overly complex tax system — free to raise their family and live their lives without the fear of government intrusion,” Windschitl said.