Some Iowa lawmakers will likely push for increased regulations around vaping products during the 2020 legislative session, but the path to a bipartisan consensus is unclear. 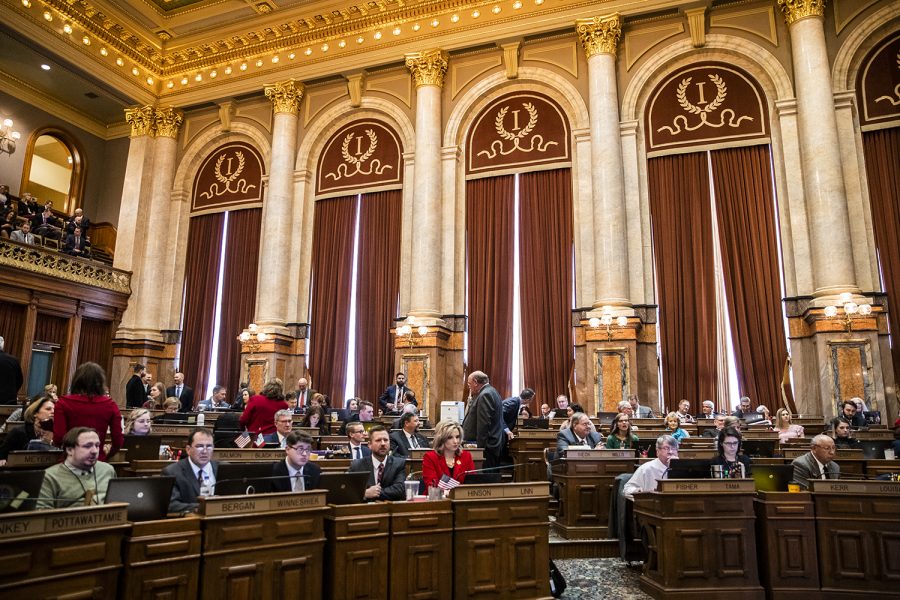 The Iowa House convenes at the Iowa State Capitol on Monday, Jan. 13, 2020. Leaders in the Iowa House of Representatives gave opening remarks to preview their priorities for the 2020 session.

“I think there are people that will file bills,” said Kaufmann, Johnson County’s lone Republican legislator. “The level of interest in it actually happening is yet to be determined.”

A pre-filed bill, proposed by the Iowa Department of Public Health, has already been introduced in the Iowa Legislature that would amend the Smoke Free Air Act to include vapor products as well as devices that heat tobacco products rather than burning them. The Smoke Free Air Act is a 2008 law that prohibits smoking in public places such as restaurants, retail stores, and public transportation.

There is currently no law in Iowa against using vapor devices in public places, though many restaurants and businesses don’t allow them.

In December, Congress passed a broad budget bill that included provisions to raise the federal minimum age to purchase tobacco to 21. The congressional legislative package had bipartisan support and was signed into law by President Trump on Dec. 20.

Lawmakers and experts across the country are sounding alarms around the health effects of vaping, especially among teens. According to Johns Hopkins Medicine, the use of electronic cigarettes has been linked to lung disease and asthma. The Iowa Department of Public Health’s 2018 Iowa Youth Survey found that 22.4 percent of eleventh graders had used electronic cigarettes in the past year.

While the proposed bill in the Iowa Legislature doesn’t explicitly aim to combat youth use, it is one of several measures lawmakers said would likely be proposed to tighten regulations on vaping.

Iowa Sen. Joe Bolkcom, D-Iowa City, said vaping devices should be treated the same as tobacco, and amending the Smoke Free Air Act is one way to do that. He also said taxes should be increased on vapor products to mirror tobacco taxes, and that flavored and menthol vapor products should be strictly regulated.

Under current Iowa law, cigarettes are subject to an excise tax of $1.36 per pack in addition to sales tax, while vapor products are only subject to traditional sales tax.

More testing should also be done on the contents of vape liquids, Bolkcom said.

“We really do not know what the long term effects of vaping, JUUL, or any of these other products are because they haven’t been around long enough. We’re talking basically a decade or so,” he said.

Bolkcom was on a subcommittee for a 2019 bill that would have raised the minimum age to buy tobacco in Iowa to 21, but failed to make it out of the Senate appropriations committee. However, Bolkcom said raising the minimum age was not enough to combat teen nicotine use.

“If people think raising the age to 21 is going to solve the problem, it’s not,” Bolkcom said. “We can raise it to 50, and you’re still going to have middle school and teenagers getting access and vaping.”

Bolkcom expressed skepticism that Republican lawmakers would support an increase in taxes on vapor products. He said there had been partisan disagreements around tobacco regulations in the past, noting that Democratic lawmakers were unable to get enough votes to ban smoking in Iowa casinos.

“There’s going to be legislation introduced, and I’m hopeful that the Republicans will take a look at it and be willing to do more,” Bolkcom said. “But given the fights we’ve had around tobacco control and prevention, I don’t expect that there’s going to be a lot of support for either the tax issue or the workplace ban issue.”

Kaufmann said he hasn’t decided whether he will support an increase in taxes on vapor products.

“I think that since the topic has been out there that you’ll see bills in subcommittees,” he said. “I am taking input from my constituents to find out where I’m at because I don’t have a position on it.”

Iowa Sen. Zach Wahls, D-Coralville, said that while vaping isn’t something he has followed closely, he’s concerned about the potential for teens to develop nicotine addictions.

He said the Legislature should examine the issue to see what can be done to curtail underage use, but he didn’t offer any particular piece of legislation.

“I don’t know if it’s more regulation necessarily or if it’s a law, whatever that looks like,” Wahls said. “But yeah, It’s clearly something we need to look at more.”

The Daily Iowan reached out to Iowa House Speaker Pro Tempore Matt Windschitl, R-Marshalltown, but did not receive an immediate response.