The Hawkeyes grabbed a share of the lead in the Big Ten after defeating the No. 12 Hoosiers. 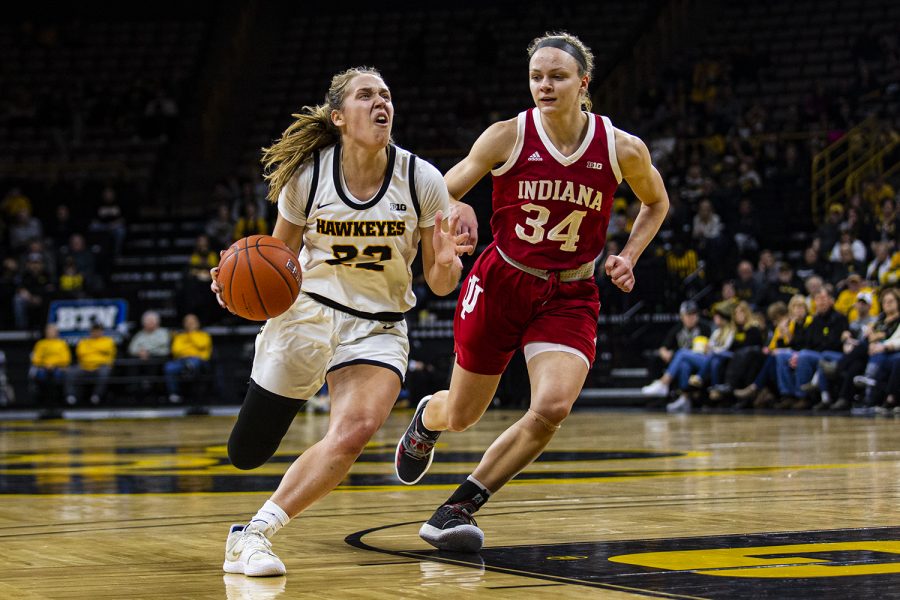 The Hawkeyes trailed by two points with 10 seconds remaining in the fourth quarter against No. 12 Indiana at Carver-Hawkeye Arena. Head coach Lisa Bluder called timeout.

Doyle hit a layup with four seconds remaining in regulation to tie the game at 74, keeping the game alive for Iowa, who would go on to win the game in double overtime, 91-85.

The Hawkeyes trailed by 14 points in the second quarter, but didn’t let the deficit get the best of them. With the win, the Hawkeyes now sit at 13-3 overall and 4-1 in Big Ten play, and have a share of the conference lead with Rutgers and Indiana.

“First place sounds good to me, it never sounds bad,” Bluder said. “You certainly want it at the end of the year, but we will take it any time. There is a lot of basketball to be played and we know that.”

The victory extends the team’s winning streak at Carver to 30 games, ranking second in the country to Baylor (48). It is also the first time Iowa has been victorious in back-to-back games against ranked teams since the 2017-18 season.

Doyle had maybe her best game of the season against Indiana, and came in clutch when the Hawkeyes needed her most.

The senior finished with 31 points on 13-of-22 shooting, while also recording 10 assists and falling just short of a triple-double with nine rebounds. Doyle also stole the ball three times.

Along with her game-saving layup at the end of regulation, Doyle came up big in overtime. Doyle scored seven points between the two overtime periods, six of them coming in double overtime.

The LaGrange Park, Illinois, native went 2-for-2 from the field and hit two free throws in the second overtime period, helping the Hawkeyes pull away and defeat Indiana.

This was Doyle’s sixth 20-plus point game of the season.

Other Hawkeyes got in on the scoring, however.

Monika Czinano scored 23 points on 8-of-16 shooting, while Makenzie Meyer contributed 17 points. Meyer scored 15 of her 17 points in the second half and overtime.

This win concludes what has been a hectic seven days for the Hawkeyes.

Iowa has defeated Northwestern on the road and the ranked duo of Maryland and Indiana at home in the last week. Those three teams have a combined record of 39-9 on the season.

Bluder’s team didn’t flinch, however, and now sits atop the conference standings.

“It was a good week, it really was,” Bluder said. “Going to Northwestern and getting a win there and then winning two top-20 games on your home court. I can’t be more proud of these women and the leadership, effort, and focus we are getting every day.”