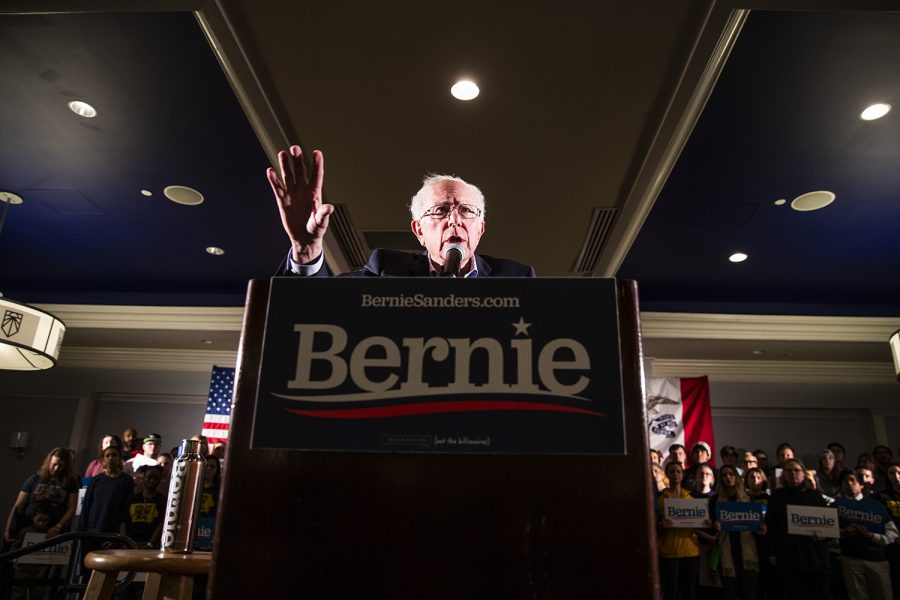 Accompanied by Rep. Rashida Tlaib, D-Mich., presidential hopeful Bernie Sanders said the U.S. has to act with a fierce sense of urgency to avoid climate disaster in his first visit to Iowa City since his rise to the top of the latest Iowa Poll.

“We are actually, within our own lifetimes, with our own eyes, seeing the changes that are taking place,” Sanders said at a climate rally at the Graduate hotel on Sunday.

The U.S. senator from Vermont railed on climate change policy at a rally of about 900 people. Sanders spoke about the Green New Deal, his policy proposals to halt climate change, and the dangers of climate inaction from government.

Sanders pointed to wildfires, droughts, and rising sea levels around the world as evidence that climate change is a threat. He mentioned the wildfires raging in Australia as well as the wildfires in California in 2018.

“If we do not get our act together in a very bold and progressive way, what you are seeing in Australia right now will be coming for countries all over the world in the years and decades to come,” he said.

Sanders criticized President Trump’s approach to climate change, saying the president has encouraged the production of fossil fuels. Trump called climate change a hoax during his 2016 presidential campaign, and on Thursday announced a rollback on National Environmental Policy Act regulations to allow easier construction of highways, mines, and gas pipelines. However, during this announcement, Trump told reporters that “nothing is a hoax.”

Sanders was also accompanied by members of the Sunrise Movement, a national youth-led climate action organization. The Sunrise Movement endorsed Sanders on Jan. 9 with more than 75 percent support from members who voted.

The rally was held just days after Sanders took the top spot in the Des Moines Register/CNN/Mediacom Iowa Poll for the first time, polling at 20 percent.

The poll of 701 likely Democratic caucusgoers was conducted by Selzer and Co. between Jan. 2 and Jan. 8, and has a margin of error of 3.7 percentage points.

Sanders has had a tumultuous trip to the top of the Des Moines Register’s poll, starting 2019 with 25 percent in March and falling to 11 percent in September before rising to 20 percent in January of 2020.

Iowa City resident Owen Wade, 32, who plans to caucus for Sanders, said that while he was excited about the results of the newest Iowa Poll, he doesn’t put too much stock in it.

“I’m somewhat skeptical of polling in general, and I don’t really like horse-race politics,” Wade said. “I think people would be better served if they talked more about the issues and less about who was leading at any point in time, because those just change any given month, and it’s just a blip in time.”

Mike Hector, 29, of Coralville was at the rally to see Sanders for the first time this caucus cycle. Hector said Sanders is his top pick for president, and he plans to caucus for Sanders in February.

Hector said Sanders consistently aligns with the same policy positions as himself, and other candidates are lacking in some way or another. He said Sanders’ support for the Green New Deal is a major factor in his decision to support him.

“He’s supporting a Green New Deal, which is something we obviously need sooner than later, as soon as possible,” he said. “…That’s among the issues that are really important to me.”

Sanders’ stop in Iowa City marked the end of a three-day swing through the state three weeks ahead of the Iowa caucuses.