In the runup to the Iowa caucuses Cory Booker is trying to reach as many Iowans as he can. In eastern Iowa Thursday, Booker emphasized that Iowans should elect who they find inspirational, saying extensive plans and early polling is not indicative of who will win the nomination. 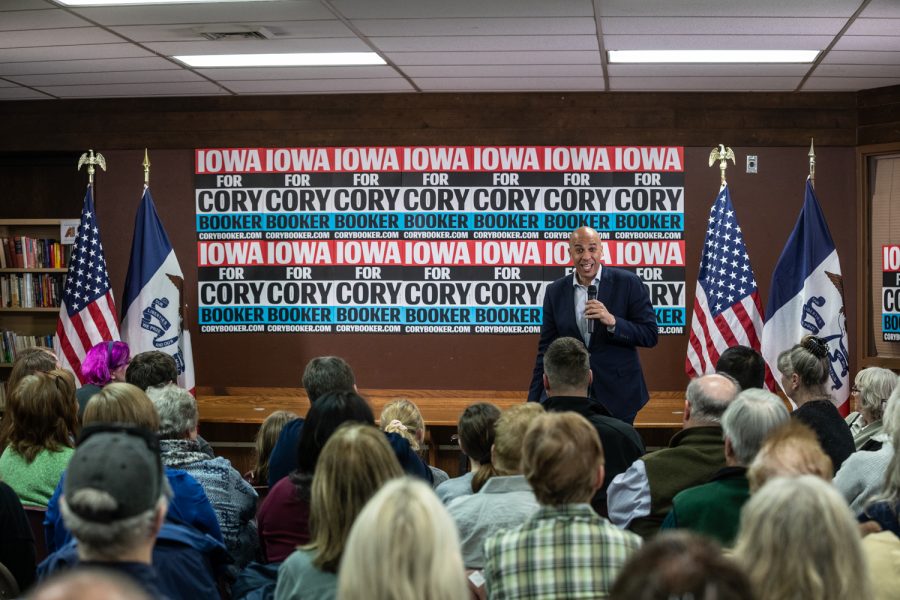 Senator Cory Booker, D-N.J. speaks to the audience during a campaign event at the First Street Community Center in Mount Vernon on Thursday, January 9 2020. Senator Booker spoke about his plans for the country if he wins the presidency.

Cory Booker is racing against the clock.

Much like his experience as a football player at Stanford, which he likes to make jokes about at town halls, Booker is trying to connect with as many Iowans as possible before time runs out — the caucus date of Feb. 3.

More than 150 people showed up to see the Democratic senator from New Jersey speak at a North Liberty town hall Thursday afternoon and another 100 people attended a meet and greet at Cornell College in Mount Vernon.

His beginning speech at the North Liberty Community Center lasted well past the 40 minute mark, but almost no one moved from their seats.

With almost a lyrical rhythm to his speech, Booker encouraged Iowans there to caucus for someone who inspired them, adding that minute differences in policy proposals or a better standing in polls doesn’t necessarily mean a win in November.

“Is this election about who has the better 15 point policy plan on guns?” Booker asked of the North Liberty group. “No, it is about us challenging each other, to understand that we are not each other’s enemies, that we have to have that deeper, more courageous empathy, that our politics must begin to reflect our core values.”

Booker, the former mayor of Newark, added that he’s the only person running for the Oval Office who lives in a community below the poverty line.

He’s four polls short of meeting the DNC-mandated 5 percent threshold to qualify for the Jan. 14 debate in Des Moines. The Des Moines Register/Mediacom/CNN poll will be released on Friday at 5 p.m. — one of the last qualifying polls before the midnight deadline.

Several people in attendance at his North Liberty town hall said they decided to caucus for Booker after hearing him speak in person. Campaign communications director, Tess Seger, said staffers were running short of commit-to-caucus cards for the senator at his North Liberty stop.

Coralville resident Vicki Siefers said she decided to caucus for Booker months ago after she heard him speak.

“I don’t understand why he’s polling low,” Siefers said. “Have you heard of any other candidates that bring you to tears? There’s no one who touches him.” 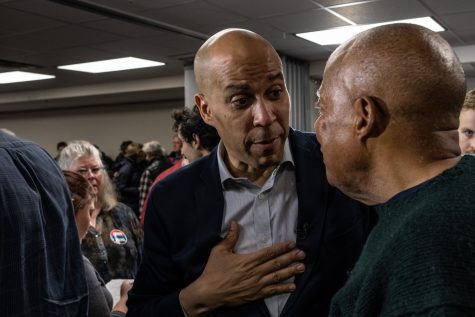 Wyatt DlouhySenator Cory Booker, D-N.J. speaks with an attendee during a campaign event at the North Liberty Community Center on Thursday, January 9 2020.

One speed bump in meeting Iowans face-to-face, however, Booker acknowledged to the North Liberty audience, will be obligations such as a senate impeachment trial that could pull him from the campaign trail.

“I might be off the field for a week for the trial, and not be able to do this,” he said, referring to the meet-and-greet event. “Where people are getting to know me more.”

He added that without large personal wealth, he can’t advertise as much as candidates such as Tom Steyer or Michael Bloomberg.

“I’m not a billionaire. So I can’t be on your TV like current candidates that are on there more than Jimmy Kimmel is,” Booker said.

Adding, “We know we’re watching a perfect storm of challenges. The reality is is we know we come here we upset expectations, finish in the top three or four,” he said.

Booker has been touring Iowa this week, but had to cancel events scheduled Wednesday to attend a briefing for senators on the Trump administration’s reasoning behind the killing of Iran military commander Qasem Soleimani.

He mentioned the meeting during his speech, calling the briefing “unbelievably frustrating.”

One attendee asked Booker why.

After the briefing, Booker said, he remained unconvinced that the Soleimani had presented an imminent threat to the American people, adding that Congress should declare war before a president decides to kill a foreign country’s military general.

“They did not get any sufficient evidence that they met any legal standard to intervene and kill a general from Iran when we have not declared war,” Booker said.

“Nobody asks ‘How are we gonna pay to move those thousands of troops that our president just did into the Middle East?’” Booker said. “But when we start talking about food stamps, he’s OK with cutting 800,000 people off food stamps.”