It went down to the wire, but the Nittany Lions pulled away from the Hawkeyes late to win, 89-86. 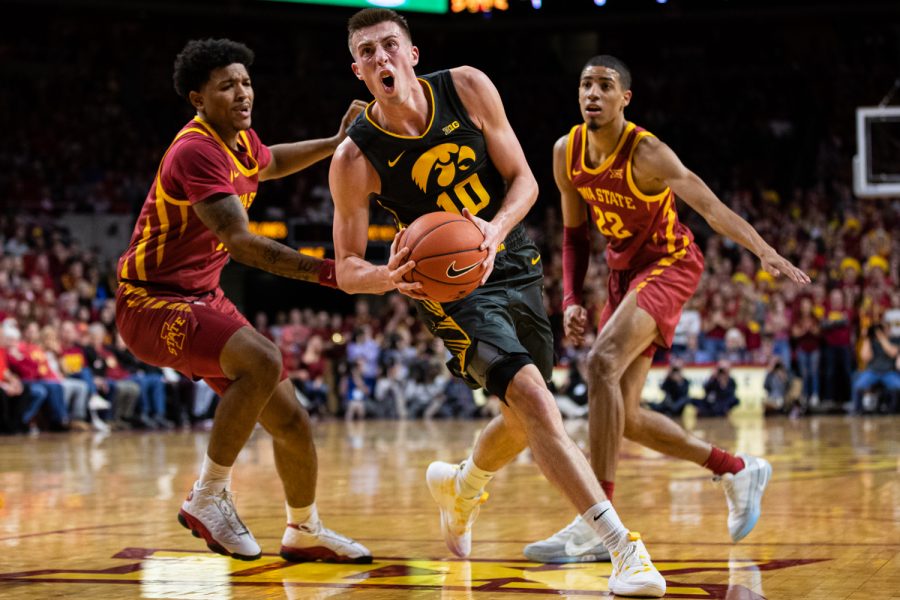 Iowa guard Joe Wieskamp drives to the rim during a menÕs basketball match between Iowa and Iowa State at Hilton Coliseum on Thursday, Dec. 12, 2019. Wieskamp finished with 13 points.

The matchup between No. 23 Iowa and No. 21 Penn State at The Palestra in Philadelphia did not disappoint.

The ranked showdown between the two Big Ten teams was an early highlight of conference play, but Penn State escaped with the 89-86 victory.

In a back-and-forth game, center Luka Garza and forward Joe Wieskamp acted as a one-two punch for the Hawkeyes.

Garza continued his scoring prowess against Penn State. The conference’s leading scorer notched 34 points on 13-of-19 shooting for Iowa, while also collecting 12 rebounds.

Wieskamp scored 23 points on 8-of-15 shooting, and was feeling it from beyond the arc. The Muscatine, Iowa, native hit five of his 10 shots from 3-point range.

With injury issues troubling Iowa of late, Garza and Wieskamp both played 35 of the game’s 40 minutes.

What cost Iowa the game down the stretch was carelessness with the basketball.

The Hawkeyes turned the ball over 15 times, leading to 20 Penn State points as a result.

Izaiah Brockington was the playmaker down the stretch for the Nittany Lions. The guard scored 23 points on 9-of-15 shooting. Three other Penn State players also scored in double figures.

The loss drops the Hawkeyes to 10-4 overall, and 1-2 in conference play.

Iowa next takes the court Jan. 7 in Nebraska to take on the Cornhuskers.