Bruce Teague and Mazahir Salih were named mayor and mayor pro tem of Iowa City, respectively, on Thursday with a new majority-female council. 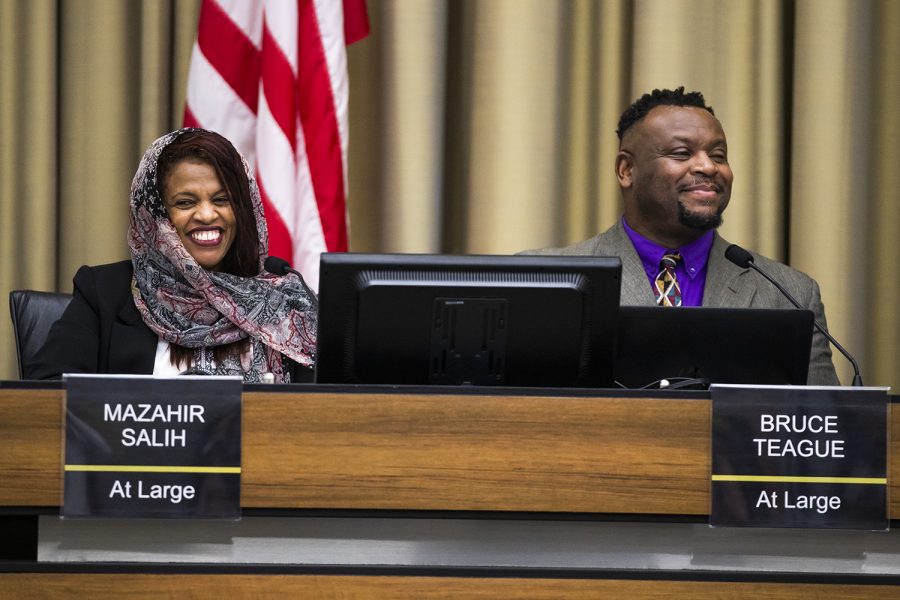 Mayor Pro Tem Mazahir Salih (left) and Mayor Bruce Teague smile after being sworn in during the City Council meeting at Iowa City City Hall on Thursday, Jan. 2, 2020. The city councilors also voted on appointments for a number of city commissions.

The councilors named Teague the next Iowa City mayor in a second round of votes, 5-2, after initially failing to reach the four votes needed to name a mayor. He was elected to the Iowa City City Council in 2018 after highlighting his local ties and dedication to underrepresented communities.

“I have a servant’s heart,” Teague said. “I have a humble spirit. And I am not an ego trip. I am a collaborator, and can lead council meetings as an equal.” 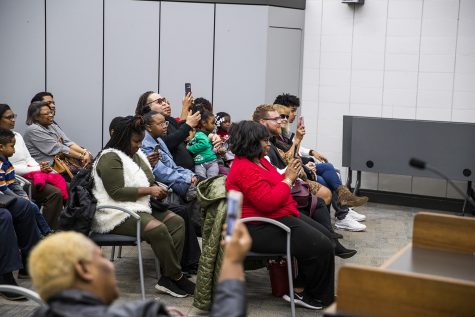 Katina ZentzThe family of Mayor Bruce Teague takes photos as he is sworn in during the City Council meeting at Iowa City City Hall on Thursday, Jan. 2, 2020. The city councilors also voted on appointments for a number of city commissions.

Teague succeeds former Mayor Jim Throgmorton, who did not seek re-election to the council. A Chicago native, Teague began serving on the City Council after a special election in 2018 to fill the vacant seat of former City Councilor Kingsley Botchway, who resigned that July to become the chief officer of human resources for the Waterloo Community School District.

He moved to Iowa City from Chicago at 17 years old and attended Kirkwood Community College. Teague later graduated from the University of Iowa with a bachelor’s in psychology and a certificate in aging studies.

The new mayor said he found a home in Iowa City after making the transition without his parents. In the 26 years since, he said he has built strong relationships with the people of this community who helped foster his personal development.

Once a student who received C’s and F’s and was at risk of not graduating high school, Teague said “the people of Iowa City helped develop me into who I am today.” He said his Hawkeye ties will play into engaging with the city’s student population of more than 30,000.

“I’m a Hawkeye, so I’m a graduate of the University of Iowa, so I really do believe that the collaborative work that I’ve been doing will just be a little heightened with the role as mayor,” he told The Daily Iowan. “I’m looking forward to meeting with the students themselves, some of the leadership from the University of Iowa.”

Addressing climate change through the city’s Climate Action Plan and promoting justice for all within the community were key issues Teague said he plans to address. The city’s budget planning session on Saturday will be a key step in setting the City Council’s priorities, Teague said.

“We want some solidarity within our financial state,” he said. “… Because you never have enough money as a, as a community, correct, but what you do is you look at what are those values what are those core things that you just won’t compromise on.” 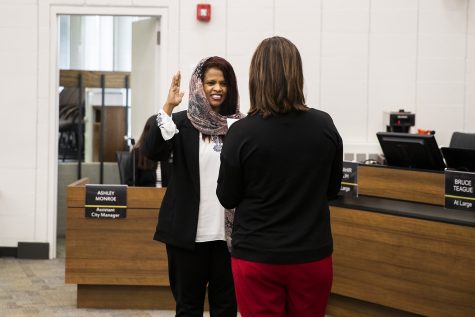 Earlier in the meeting, Teague quipped that the women serving on the city’s first five-woman-majority City Council have “made history by making John [Thomas] and me minorities.” He said it feels great to be ready to work alongside the female city councilors.

“I am so happy that this is the first majority-woman council,” he said. “That is awesome and amazing, and so I can’t be more than happy for being the minority, and right now for me being in the role as mayor, I’m so grateful for that opportunity.”

Salih, who became the first Sudanese elected official in the U.S. when she became a city councilor, said she is honored to represent the community as the new mayor pro tem, particularly as part of the historic female majority on the council.

“That’s the way to go,” she said. “Women can do a lot of good things. Nothing against men, but I think that’s powerful and very inspiring to me and a lot of women in the community.”