Smith-Marsette shows off speed in win over USC

Ihmir Smith-Marsette scored three touchdowns in three different ways to help lead the Hawkeyes over the Trojans in the Holiday Bowl. 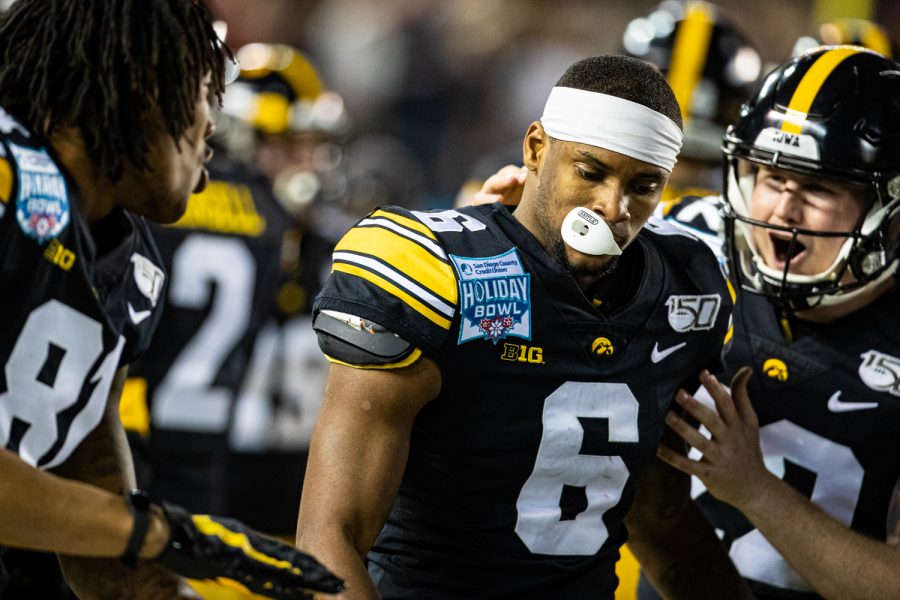 Iowa wideout Ihmir Smith-Marsette celebrates a kick-return touchdown during the 2019 SDCCU Holiday Bowl between Iowa and USC in San Diego on Friday, Dec. 27, 2019. The Hawkeyes defeated the Trojans, 49-24.

SAN DIEGO — It’s easy to spot Ihmir Smith-Marsette on the field and off it.

Smith-Marsette found the end zone three times — once rushing, once receiving, and one on a kick return — in the second quarter of Iowa’s 49-24 Holiday Bowl victory over USC on his way to earning Offensive MVP honors.

“The game plan was to go out there, attack early,” Smith-Marsette said. “We have plays scripted for everybody, and I was just playing my game.”

Offensive coordinator Brian Ferentz called one of the best games of his time in his role, using motion and jet sweeps to throw off the Trojan defense.

He also dialed up a few trick plays.

First, it was a reverse that Tyrone Tracy took 23 yards for a score on Iowa’s first drive. Then, Ferentz called an end-around that Smith-Marsette scored on from six yards out.

Smith-Marsette even had a chance to throw the ball on a reverse pass, but that toss went through the hands of fellow receiver Brandon Smith.

In the end, Smith-Marsette settled for three scores. It got the job done.

“He’s the most vibrant in the room,” Smith said. “We’re going to hear about [Smith-Marsette’s three touchdowns] for a little while, but by spring, we’re going to be back to work… But he’s definitely going to enjoy this win. He deserves it.”

Smith-Marsette’s kick-six came at an especially good time for Iowa.

After Iowa scored on its first two possessions, USC fought back with two of its own to tie the score at 14.

The Trojans put the pressure on when quarterback Kedon Slovis hit Vavae Malepeai for a 16-yard touchdown with just over six minutes remaining in the second quarter.

He fielded the kick at Iowa’s own 2-yard line, followed his blocks across the left side of the field, faked a move inside, and turned on the jets.

“We knew we were facing a good team with some dynamic athletes — he’s one of them,” USC head coach Clay Helton said. “We got to see it firsthand tonight. We know probably game-changing as far as the kickoff return goes. All of a sudden, you blink your eyes, you’re right back down seven.”

For Smith-Marsette, who predicted kick-return touchdowns before the season began, the score took on another meaning.

“To be able to accomplish that, I could say I’m a man of my word,” Smith-Marsette said. “You can hold me to it. Just being able to go out there, battle with the other 10 guys on that unit throughout the season, all credit to them. They work their ass off to go out there, sacrifice their body for me.”

Around the country, the Hawkeyes are known more as a gritty team than one that relies on speed to win games.

He might have changed that a little bit on Friday.

“I feel like people sometimes from the speed that they think we have on our team,” Iowa wide receiver Nico Ragaini said. “They think we’re just a big, physical team, but we’re pretty fast all-around, as well.”