Nate Stanley ranks statistically as one of the best Iowa quarterbacks of all time, and his career came to a close with an all-around offensive performance. 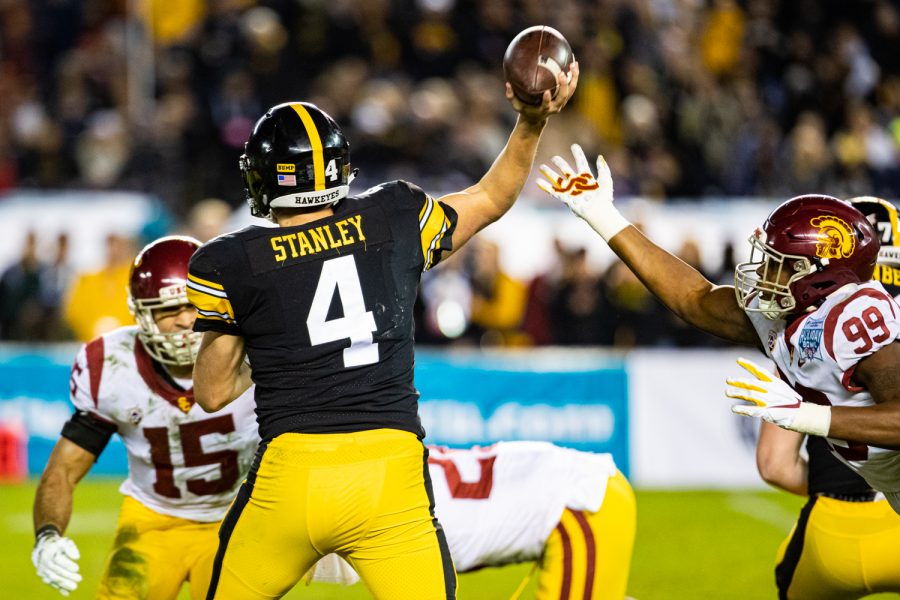 Iowa quarterback Nate Stanley attempts a pass during the 2019 SDCCU Holiday Bowl between Iowa and USC in San Diego on Friday, Dec. 27, 2019. Stanley finished with a 67% completion rate for 213 yards.

Nate Stanley has played 40-straight games as a Hawkeye. On Friday, however, when he went back to the locker room, he took off his No. 4 jersey for a final time.

Stanley is one of two quarterbacks to lead the Hawkeye to three-straight bowl game victories. Ricky Stanzi led Iowa to wins in the 2009 Outback Bowl, the 2010 Orange Bowl, and the 2010 Insight Bowl.

“That’s pretty awesome,” offensive lineman Tristan Wirfs. “Nate’s a great guy. We all love him to death. That’s been my job since I got here is to protect him. I love the guy, so him going out like that, the performance that he had [in the Holiday Bowl] was pretty special.”

In true Nate Stanley fashion, he credited his career success to his teammates.

“Just goes to show the work that this team has put in; 3-0 in those bowl games wouldn’t happen without my teammates, especially the defense,” Stanley said. “Last year against Mississippi State, our defense played great. They played great today. All three of those bowl games were truly team wins. I can’t thank my teammates enough for allowing me to be in that position.” 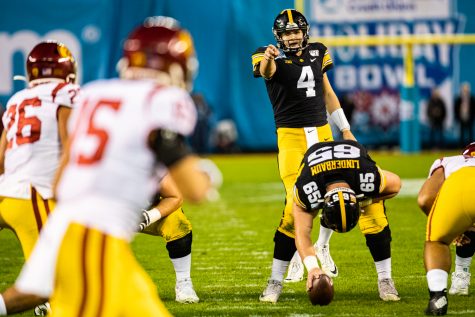 Shivansh AhujaIowa quarterback Nate Stanley calls out assignments during the 2019 SDCCU Holiday Bowl between Iowa and USC in San Diego on Friday, Dec. 27, 2019. This was Stanley’s final game in an Iowa uniform.

Since appearing in the 2017 Outback Bowl as the backup quarterback and registering one incomplete pass, Stanley has been the playmaker of Iowa’s offense.

He finished his collegiate career with 8,302 total passing yards, cementing him at second all-time for Iowa behind only Chuck Long. He also finished the season with 68 passing touchdowns, six off from Long’s record.

Statistically, this was Stanley’s best year despite having 10 less touchdowns than each of the last two seasons. He threw for 2,951 yards on 399 attempts and averaged 227 yards per game, all of which were single-season highs.

After taking out his 23 sacks for a loss of 219 yards, Stanley rushed for 226 yards this season on 53 carries. His longest career rush was for 16 yards against Miami (Ohio) on Aug. 31.

In the Holiday Bowl 49-24 win over USC, Stanley threw for 219 yards and two touchdowns. He also ran the ball seven times with a gain of 12 yards.

“I think that’s probably the best or one of the best games of offense he’s played all season,” linebacker Nick Niemann said. “Really proud of just all of those guys. When we were struggling at the beginning, they helped pull their load and kind of overshadowed some of [the defense’s] difficulties.”