Iowa honors Hayden Fry during and after Holiday Bowl win

The Hawkeyes honored legendary Iowa coach Hayden Fry on and off the field at the Holiday Bowl. 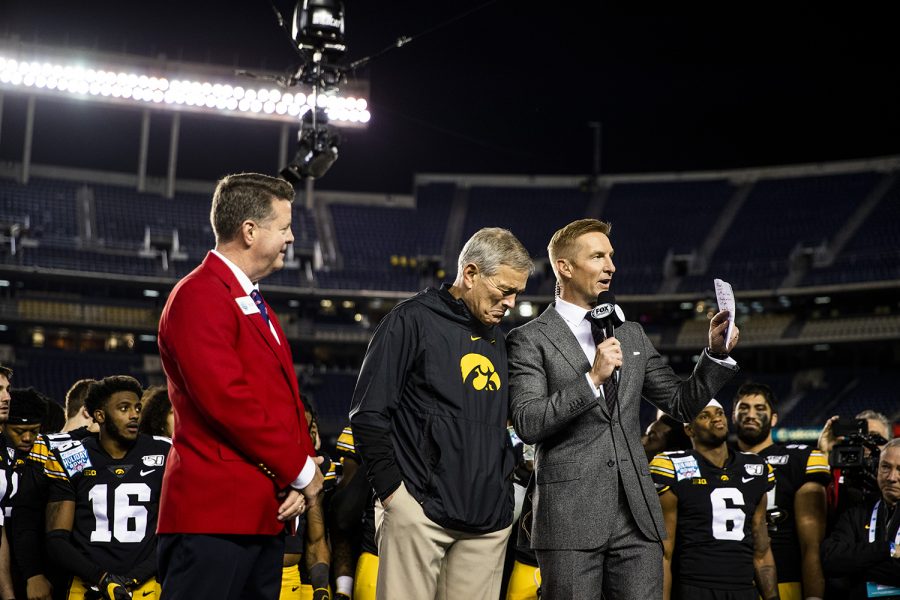 Iowa head coach Kirk Ferentz gets emotional as the announcer mentioned Hayden Fry during the Holiday Bowl game between Iowa and USC at SDCCU Stadium on Friday, Dec. 27, 2019. The Hawkeyes defeated the Trojans, 49-24.

Something special happened in the Iowa locker room after the Hawkeyes beat USC 49-24 in the Holiday Bowl on Friday.

With the Tigerhawks already removed from Iowa’s helmets, it proved to be the perfect way to honor former head coach Hayden Fry, who made celebrating wins with the hokey pokey a habit for the Hawkeyes. 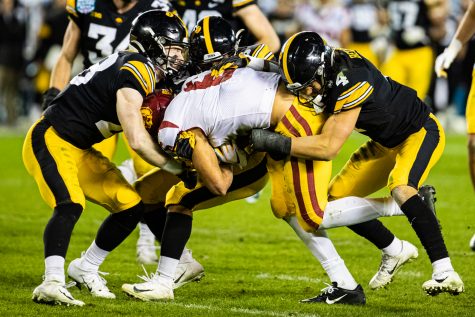 Shivansh AhujaIowa defenders gather around USC wideout Michael Pittman Jr. during the 2019 SDCCU Holiday Bowl between Iowa and USC in San Diego on Friday, Dec. 27, 2019. The Hawkeyes played without a Tigerhawk logo on their helmets in honor of former head coach Hayden Fry, who died Dec. 17.

“It’s been a really challenging month in Iowa athletics with the passing of Bump [Elliot, former Iowa athletic director] and Coach Fry,” Iowa head coach Kirk Ferentz said. “When you think about both those men, what they stood for, what they taught was competing at a high level, and doing it with great competitiveness but also with integrity. That’s one of the reasons I’m so proud to be at Iowa.”

The dance was first initiated by Levi and Landan Paulsen, who gathered the team together after it left the field.

Ferentz didn’t know it was going to happen. But when he saw it, he knew it was a special moment.

“From what I heard in Coach Ferentz’s voice, I think he was getting emotional, and he has every right to,” Iowa offensive tackle Tristan Wirfs said. “I thought that was a pretty special moment in the locker room. He said he thinks Coach Fry would have loved to coach this team and would be very proud of us, so I think that means a lot to the guys in the locker room.”

RELATED: Hawkeyes react to the death of Hayden Fry

Although the team never received the opportunity to listen to Fry when its members were in the program, it understands the importance of the legacy Fry left.

“I think it’s just respecting the tradition of Coach Fry and the standard that he set in his time here,” Iowa linebacker Kristian Welch said. “With his passing, honoring him with the helmet and other things like that, it’s just an amazing thing that we can do just to tip our hat to him… That hokey pokey at the end just kind of capped it off.”

Winning the game for Ferentz made it an even more emotional moment for the team.

RELATED: Read: Hayden Fry will always be a Hawkeye

In recent weeks, the Hawkeyes have learned how much of an impact Fry had on Ferentz’s life if they didn’t already know.

From beating USC in dominant fashion with Tigerhawks missing from their helmets to performing the hokey pokey in the locker room, Fry’s impact remains at Iowa through Ferentz.

“Coach Fry was a mentor for Coach Ferentz — I mean, the legacy he left on the University of Iowa is unmatched by anybody,” Iowa defensive end A.J. Epenesa said. “You think of Iowa, you think of Hayden Fry, and Dan Gable, and people like that. To be able to have a man like that just touch a program so much in that way, it makes you feel good to be part of a program like this and to be a part of a team coached by Coach Ferentz.”