In Iowa City, Amy Klobuchar says she can energize Iowa’s Democratic base

Klobuchar has pitched herself as a moderate who can appeal to Republicans and independents. In Iowa’s highest concentrated Democratic area, Klobuchar said she could fire up core Democrats. 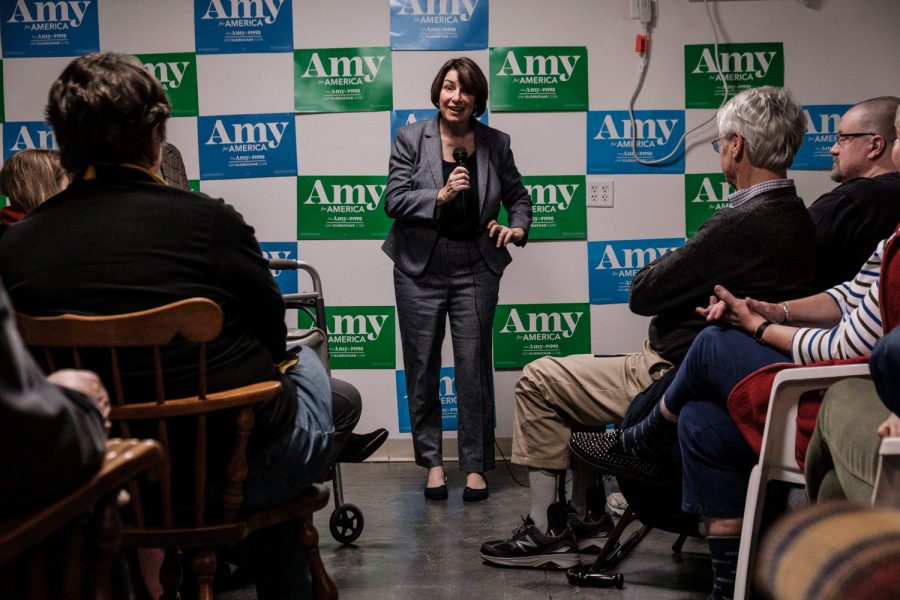 Senator Amy Klobuchar, D-Minn. speaks during an office opening event in Iowa City on Saturday, December 28, 2019. Senator Klobuchar spoke to an audience of around 200 people.

Amy Klobuchar can turnout Iowa’s Democratic base in 2020, the Minnesota senator and presidential hopeful said while opening a campaign office in Iowa’s bluest county Dec. 28.

“And as for a fired up Democratic base — because you might have some of that in Iowa City — I have gotten the highest voter turnout when I led this ticket in the country. Sorry, Iowa,” she said. “I have done that over and over again — gotten Democrats out, and significantly won in the suburban areas over and over again.”

Minnesota had the highest voter turnout rate of any state in the 2018 midterm elections (while Klobuchar was up for reelection), though is consistently in the top 10 states for percentage of voters who turn out to vote.

In the race for the Democratic presidential nomination, Klobuchar has consistently pitched herself as a bridge builder between Democrats and Republicans in the electorate and while lawmaking in Senate. She touts a record of passing legislation, ranking third out of Senate Democrats for the amount of bills she’s written that became law during the 2018 Congressional session, according to legislative tracking website govtrack.us.

Klobuchar continued that message in Johnson County, where Democrats outnumber Republicans 2 to 1. In her office, the walls were plastered with blue and green signs that said “every race, every place,” a reference to her winning each race she’s run in, including for county attorney and three terms in the U.S. Senate.

“It’s all out coalition that we have to build… Because we have this moment in time to save our country to save our democracy to make sure that people can continue to vote, and that they feel like they have a say at the table,” she said.

Klobuchar’s Iowa City stop came after she visited her 99th county in Iowa on Friday, completing what is colloquially called a “full Grassley.” The name is a reference to Iowa’s senior Republican senator who visits all 99 counties each year.

She said her tour of Iowa highlights her goals to build the Democratic Party, and help Democrats win state races and congressional seats, not just the presidency.

“We literally went every place,” Klobuchar said in Iowa City. “And I think that that is a very important thing to do when you’re running for president right now, for the simple reason that you’ve got to go to where people are.”

With a looming impeachment trial to be scheduled in the U.S. Senate, Klobuchar said she plans to dispatch surrogates to the campaign trail ahead of the Iowa caucuses.

She introduced her daughter, Abigail Bessler, to the Iowa City group, saying Iowans would likely see more of her in January in addition to Klobuchar’s husband, John Bessler, while Klobuchar has to be Washington as a juror. Her campaign also has a list of local lawmakers and politicians who’ve endorsed her who may carry out duties for her, she said.

One of those endorsers, Iowa City City Councilor Janice Weiner introduced Klobuchar Saturday, and for the first time publicly she announced she’d be supporting Klobuchar. Weiner referenced an Iowa City roundtable Klobuchar hosted in May, when Weiner shared her family’s experiences with Iowa’s mental-health system.

She said Klobuchar took her testimony and used it to craft sound policy aimed to improve mental-health and substance-abuse services. Klobuchar’s plan, also released in May, would put $100 billion toward mental-health treatment programs and prevention.

“She (Klobuchar) is, in my view, the perfect foil to Donald Trump,” Weiner said.

“Amy can help us elect Democrats up and down the ticket which we sorely need here in the Statehouse in Iowa as well,” Weiner continued. “Last year with Amy at the top of the ticket in Minnesota, she won 42 of the rural counties that Trump had won in 2016.”

Klobuchar was 6 percent of Iowans’ first choice, according to a Des Moines Register/Mediacom Poll conducted in mid-November, trailing four other candidates. In

Klobuchar also ran through a litany of her policy positions Saturday. She highlighted her work on an immigration bill passed the Senate in 2013 and then stalled in the House, saying that she would support a permanent pathway to citizenship.

On higher education, Klobuchar said she would support one- and two-year college degrees being free, doubling the Pell Grant dollar amount awarded to each recipient and raising the family income cap for those eligible for Pell Grants.

Klobuchar supports a nonprofit public option for health insurance, she said in Iowa City. She also wants to address rising pharmaceutical prices, referencing a bill her and Sen. Bernie Sanders, I-Vt., cosponsor that would allow pharmaceuticals to be brought in from Canada.

One attendee, Ellen Sweet, of Iowa City said she like Klobuchar’s moderate approach to politics. She supported Martin O’Malley in 2016 caucuses, but didn’t have a plan in place for a second-choice candidate when O’Malley didn’t have enough supporters to be viable in her precinct.

This time, she’s supporting Colorado Sen. Michael Bennet for her first choice, and is keeping three other Democrats — including Klobuchar — in her hand as potential second choices. She said she’s also looking for a younger candidate.

“I’m in the age group of the senior candidates, and although I’m not quite older than all of them, I want someone my children’s age to be running things,” said Sweet, who declined to give her own age.