In what was possibly his final game as a Hawkeye, A.J. Epenesa shined to help shut down a booming pass offense. 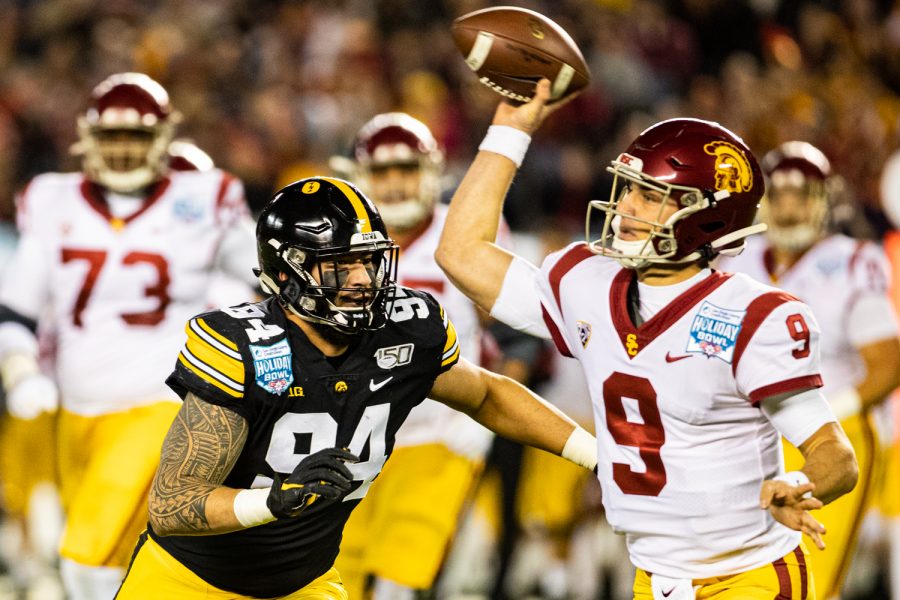 SAN DIEGO — If the Holiday Bowl was A.J. Epenesa’s final game in a Hawkeye uniform, it was a good one to go out on.

The junior defensive end recorded 2.5 sacks to finish the season with 11.5, the most in a single season of his career. He tallied back-to-back 10-plus sack seasons after registering 10.5 in 2018.

“I wouldn’t want 94 running up behind me — I know that much,” linebacker Nick Niemann said.

Epenesa knocked freshman USC quarterback Kedon Slovis down for the first time in the second quarter for a loss of nine yards.

USC still went on to score on the drive and tie the game at 14.

The Trojans opened up the second half down 28-17 but followed a touchdown up with a recovered onside kick. The momentum was beginning to swing in their favor.

Enter Epenesa. He sacked Slovis again on the second play of the drive and forced a fumble. The ball was recovered by USC, but Slovis left the game with an injury.

“I had been doing some stuff earlier in the game, some power moves, some stuff,” Epenesa said. “I was able to get him with the speed rushing, getting him to be able to lean a little bit. He’s right-handed. I’m on the blindside; he didn’t see me coming. I was going for the ball, wanted to get the ball back to the offense.”

“It’s no different than any other difficult situation,” Epenesa said. “You don’t ask who started the fire, you just put it out. That’s our mentality on the field no matter where we’re at. Play your hardest. The goal is three-and-out. We want to get the offense back on the field to score points.”

Epenesa’s night in the sack column ended after helping Chauncey Golston take down Fink again for a loss of eight yards.

The USC passing offense was projected to be a challenge for Iowa leading up to the game, but with the help of Epenesa and the pressure the defensive line put on both Trojan quarterbacks, it was held to three touchdowns.

“They were throwing the ball all over us, and when you get a pass rusher up front, that kind of makes the QB nervous and makes him think,” Niemann said.

This season and for his entire career, Epenesa has had a big impact on the Hawkeye defense and the program as a whole.

After his performance last season, he was double-teamed against almost every opponent this year. But later in the season, he found a way to break through offensive lines to put pressure on quarterbacks.

“He’s also a team player. He never gets frustrated with that [many] things. He’s always happy for whatever happens with anybody. He’s just a great guy to be around.”