The Holiday Bowl could be a toss-up. Two DI Pregame writers discuss what it will take for each side to win. 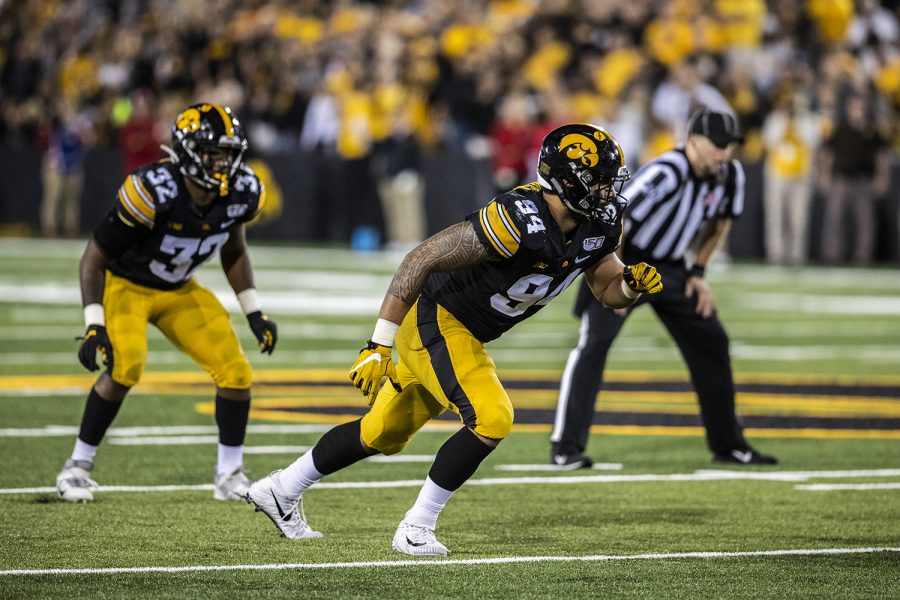 Iowa defensive end AJ Epenesa prepares for a play during the Iowa football game against Miami (Ohio) at Kinnick Stadium on Saturday, August 31, 2019. The Hawkeyes defeated the Redhawks 38-14.

Michael Pittman Jr. leads the squad with 95 catches, 1,222 yards, and 11 scores, while Amon-Ra St. Brown and Tyler Vaughns have both hauled in 68 passes and six touchdowns.

For reference, the last time Iowa had one pass-catcher — wide receiver or tight end — go over 800 yards receiving was when Marvin McNutt recorded 1,315 in 2011.

Iowa has struggled with big-bodied receivers in the past. When Purdue visited Kinnick Stadium, Boilermaker wideout David Bell went for 197 yards and a score on 13 receptions.

The Hawkeyes won both of those games.

Iowa doesn’t necessarily need to shut down USC’s receivers. It just needs to slow them down.

It’s no secret the Hawkeyes want to run the ball. That offense has been their identity for years, and nothing is changing in the Holiday Bowl.

Iowa will put an emphasis on getting Tyler Goodson involved early and often. If USC stops the freshman back, it will force quarterback Nate Stanley to beat it through the air.

That’s where Isaiah Pola-Mao — who leads USC with four interceptions — could step up.

If Iowa is forced to rely on its air attack, Stanley will need to play a clean game with minimal mistakes like he did at the beginning of the season.

It’s certainly possible Stanley and the offense can handle it. But if USC can make Iowa’s offense one-dimensional, it increases its chances of taking the Holiday Bowl trophy back to Los Angeles.

If Iowa’s A.J. Epenesa can break through and put pressure on USC’s quarterback, its passing game should be greatly affected and can help out the Iowa secondary a lot.

The Hawkeyes don’t have to worry about a strong running game from USC, so the focus should be on breaking through the line to force Kedon Slovis to throw into potentially contested air or to take away all his options.

USC wins if: It gets pressure on Nate Stanley.

Nate Stanley has struggled all season when under pressure, so it will be important for USC’s defensive line to break through Tristan Wirfs and Company to hurry his passes in order to win.

When Stanley has time, he can create options by both running the ball and finding receivers downfield. Michigan made holes in the offensive line earlier this season and showed that Iowa’s production greatly decreases with pressure, so if USC can achieve that same thing, it could be for a win.