The Hawkeyes used trick plays and Ihmir Smith-Marsette to take an early lead that they wouldn't give up. 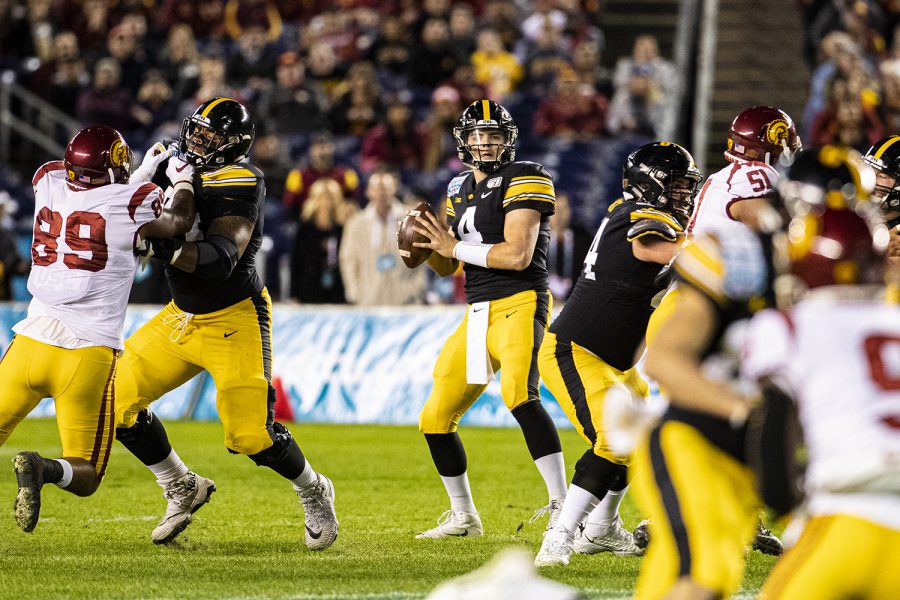 Iowa quarterback Nate Stanley drops back to pass during the 2019 SDCCU Holiday Bowl between Iowa and USC in San Diego on Friday, Dec. 27, 2019.

Iowa defeated USC, 49-24, in the Holiday Bowl on Friday to clinch its third-consecutive bowl victory and 10th win of the season.

It all started with trick plays.

On Iowa’s first drive, offensive coordinator Brian Ferentz dialed up a reverse for Tyrone Tracy that the wide receiver easily took in for six points and a quick 7-0 lead.

On its next drive, Ihmir Smith-Marsette found the end zone on an end-around from six yards out to give the Hawkeyes two rushing touchdowns by receivers in two drives.

But every time Iowa put points on the board, USC matched it. The Trojans utilized a heavy passing to score on their first two drives.

Luckily for Iowa, it had Smith-Marsette to keep it ahead by scoring three touchdowns — one rushing, one kick return, and one receiving — in the second quarter.

Smith-Marsette, who nearly added a passing score on a reverse pass, finished the game with 203 all-purpose yards to go along with his three trips to the end zone.

The Hawkeyes entered the break with a 28-17, but USC kept coming back.

On the third play after halftime, Trojan quarterback Kedon Slovis connected with Amon-Ra St. Brown for a gain of 55, and USC scored one play later.

Within four points, USC decided to use some trickery of its own, attempting an onside kick. It recovered.

But on the ensuing drive, A.J. Epenesa forced a fumble on Slovis, who suffered an injury on the play. When Matt Fink entered, things went downhill for the Trojans. USC wouldn’t score again, turning the ball over three times in the process.

Epenesa ended the game with two sacks and a forced fumble, while Geno Stone forced a fumble, as well.

The Hawkeyes put together three drives of at least 70 yards to take an early lead that they wouldn’t give up and control the time of possession.

In his final game in a Hawkeye uniform, quarterback Nate Stanley completed 18 of his 27 pass attempts for 213 yards and two touchdowns.

On the defensive side of the ball, Iowa kept USC wide receiver Michael Pittman Jr. in check, holding him to 53 yards on six receptions.