Brian Ferentz's play-calling has put Iowa out in front, but the Hawkeyes need to shore up their pass defense in the second half. 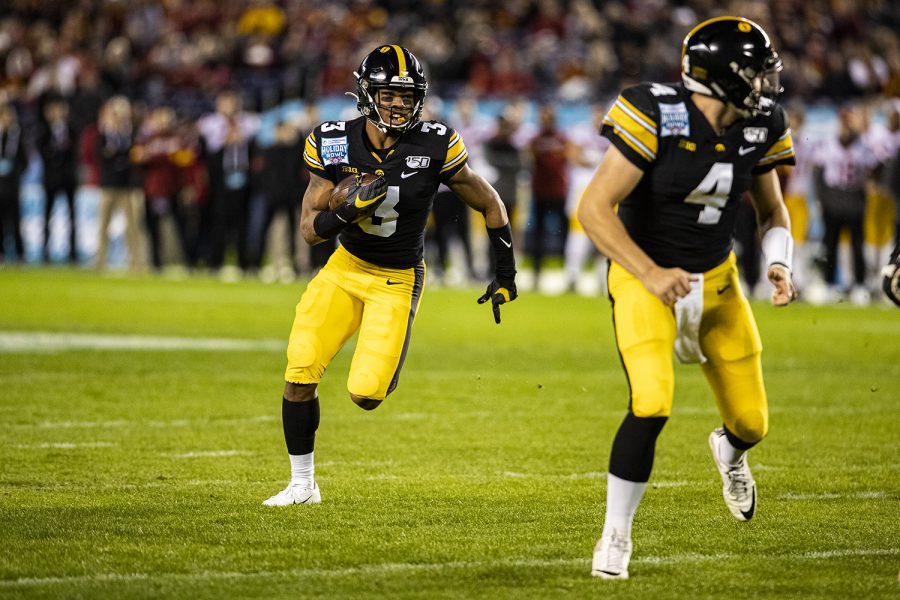 Iowa wideout Tyrone Tracy, Jr. carries the ball during the 2019 SDCCU Holiday Bowl between Iowa and USC in San Diego on Friday, Dec. 27, 2019.

Iowa scored touchdowns on its first two possessions against USC on Friday by utilizing trickery in a way it hasn’t all season.

Offensive coordinator Brian Ferentz’s playcalling has been incredible through the first 30 minutes.

First, it came on Tyrone Tracy’s 23-yard touchdown. With Nate Stanley lined up in the shotgun and two backs to his side, he handed off to Mekhi Sargent going to the left, and Sargent tossed it to a swinging Tracy. With Tristan Wirfs lead blocking, Tracy trotted in for six.

Ferentz upped the ante when he called a reverse pass from Ihmir Smith-Marsette to Brandon Smith, but the ball just slipped through Smith’s hands.

Even though it didn’t produce any points, it showed his willingness to call some plays that are outside the box.

Shortly after, Smith-Marsette scored on an end-around. Two wide receiver rushing touchdowns in a row. Just like the Hawkeyes drew it up.

Throw in a well-executed play that motioned two running backs out wide and a well-timed call for a classic quarterback sneak, and it seems as if Ferentz could be creating a game that could be remembered for a long time.

Maybe he’ll even throw in more in the second half.

-Pete Ruden
Room to improve in pass defense
USC has continuously matched Iowa’s offense with its own, and the pass has worked to freshman Kedon Slovis’ favor. For Iowa to hold off the Trojans in the second half, its pass defense needs to be better.

Slovis posted 184 passing yards in the first half compared to Nate Stanley’s 130. He has completed 19-of-27 attempts and has thrown two touchdown passes.

On the receiving end, Amon-Ra St. Brown already leads the team with 97 yards and an average of 13.9 per catch.

Michael Ojemudia had a chance for a pick-six in the first quarter but was unable to pull it in for the turnover. The Trojans went on to beat Iowa downfield and tie the game, 7-7.

USC had 65 total passing yards in the first half. Iowa’s pass defense needed to step up, not slow down.

A big part of this is taking advantage of the mistakes that Slovis makes under pressure. A.J. Epenesa has proven that he can break through the protection to take Slovis down or force him to make mistakes, and those moments can help shift the momentum towards Iowa if capitalized upon.