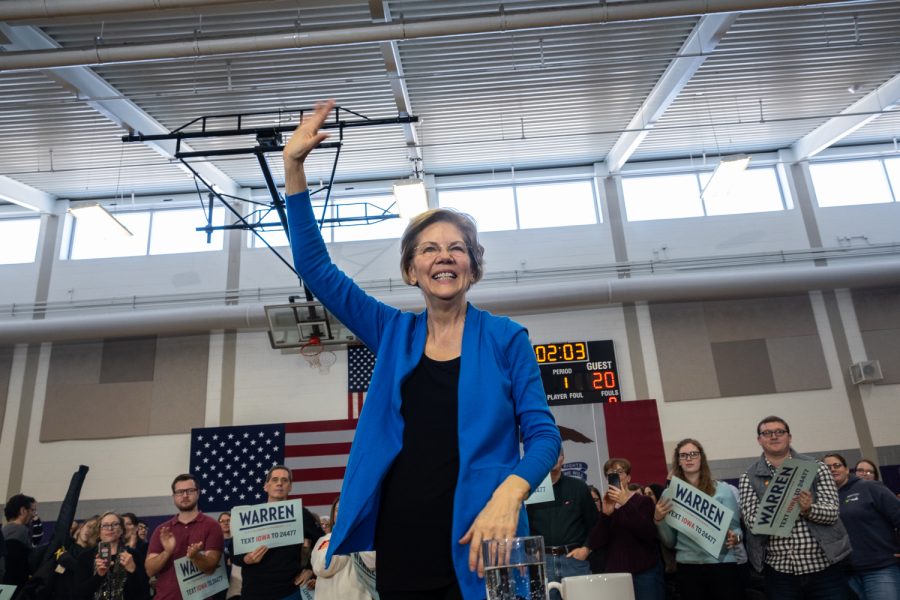 Dee Kaefring is a retired nurse who is considering to support Sen. Elizabeth Warren on Democratic caucus night. Kaefring said she saw the downfalls of the health-care industry firsthand, and she likes Warren’s Medicare-for-all plan.

“I think that the staffing ratio of nurses and patients can always get improvement,” said Kaefring at a Warren town hall in North Liberty. “The nurses are stretched so thin.”

Kaefring, 68, worked for 35 years at the University of Iowa Hospitals and Clinics in nurseries and at the High-Risk Obstetric Clinic. She said she caucused for Sen. Bernie Sanders in 2016, and she’s considering supporting him again if she doesn’t commit to Warren.

The presidential hopeful stuck closely to her plans to end government corruption under the current administration when answering 10 questions at a Dec. 21 town hall at North Central Junior High.

People asked Warren questions ranging from high prescription prices to climate change. She also stressed her plans to implement a 2-cent wealth tax and to break up large corporations.

“If the best Democrats can offer is business as usual after Donald Trump, then Democrats will lose,” Warren said.

Warren addressed President Trump by name only twice, talking mostly about corrupt politicians in Washington, D.C., who oppose corporate regulations — corporations including prescription drug and oil companies. She decried billions of dollars in profits for health-insurance providers and criticized the reluctance to place environmental regulation on big-agriculture companies.

Warren’s 2-cent wealth tax, according to her plan, would pay for universal free college and child care and broad student-loan-debt cancellation. She addressed the criticism on the amount of money she wants to invest in social programs and climate-change initiatives, saying spending money is critical for future generations.

“Before anybody pulls out a hanky to worry about the fact that health-insurance companies might not make the profits they intended to make, we’re talking about roughly $20 billion in profits last year,” Warren said in defending Medicare-for-all.

With 45 days until the Iowa caucuses, Warren has been taking more questions at town halls and continues to emphasize her message of “big structural change.”

Her visit comes two days after the Dec. 19 Democratic presidential debates. Warren and South Bend, Indiana, Mayor Pete Buttigieg had a long-anticipated altercation on stage, in which Warren called out Buttigieg for holding closed fundraisers in wine caves. He snapped back, accusing Warren of taking money from high-dollar donors during her run for her Massachusetts Senate seat.

James Durling, 25, said he thinks Buttigieg did more damage to his campaign than to Warren’s campaign during the debate, saying Buttigieg’s comments were hypocritical.

“He’s lived a much more privileged life than she has, and she earned most of that wealth much later in her life, whereas, you know, he’s very well off compared to where she was at when she was the same age,” said Durling, a longtime North Liberty resident.

In the November Des Moines Register/Mediacom/CNN poll, Buttigieg led Warren for the first time, with 25 percent of likely caucus-goers naming him as their first choice.

Durling, who said he’s committed to caucus for Warren, noted that this was the first event featuring a 2020 candidate he had attended so far. Durling was joined by his mother, Teresa Durling, and both said they’re not worried about poll numbers and think Warren has the most detailed plans among the candidates. She is one of the more electable candidates, they contended.

“I like her upbringing and her education, you know, that she came from nothing pretty much and then got herself through school and did so well,” Teresa Durling said.