A heart for the Hawks: Kid Captain leads the way to the Holiday bowl

Cooper Leeman braved through heart and lung problems since he was 14 months-old. With the support of the Stead Family Children’s Hospital, now 5-year-old Cooper is ready to support the Hawkeyes at the Holiday Bowl on Dec. 27. 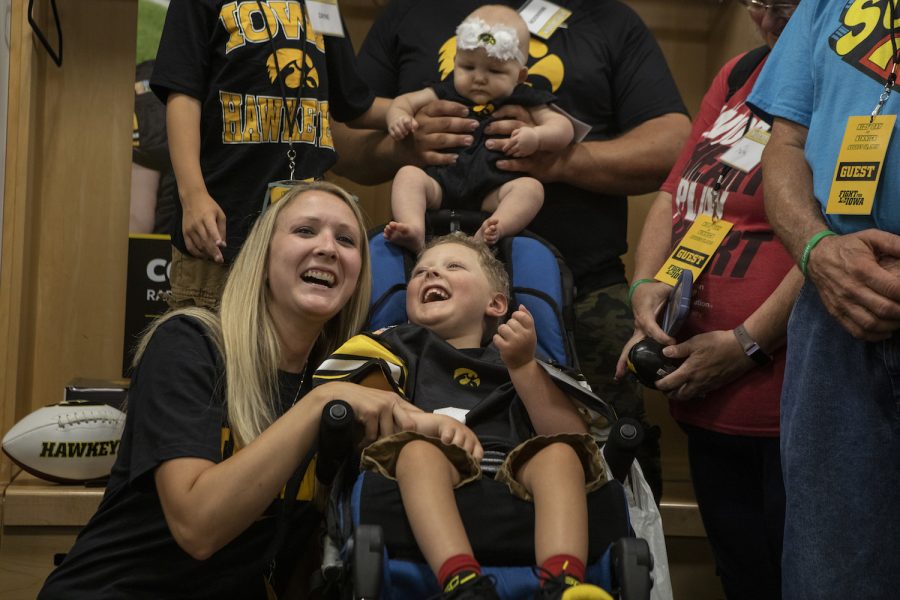 Kid Captain Cooper Leeman and his mother smile before the cameras in the Hawkeye football locker room at Kids Day at Kinnick on Saturday, August 10, 2019. Kids Day at Kinnick is an annual event for families to experience Iowa's football stadium, while watching preseason practice and honoring this year's Kid Captains.

Cooper Leeman will be leading the Hawks with a heart of gold as the honorary Kid Captain when Iowa takes on Southern California on Dec. 27 for the annual Holiday Bowl.

At 14-months-old, young Cooper was experiencing difficulty breathing and vomiting. His parents, Laurel and Brandon, immediately took him to local cardiac experts, but were told Cooper had dilated cardiomyopathy, a condition where his heart was not properly pumping blood and required a heart transplant. That day, the family traveled to the pediatric intensive care unit at the University of Iowa Stead Family Children’s Hospital.

Upon their arrival at the children’s hospital in Mar. 2015, Cooper was immediately placed in the process to seek a heart transplant. Cooper underwent a cardiac catheterization procedure in order to receive pressures of his heart and lungs, said his mother Laurel. However, upon receiving a reversal agent to awake Cooper from the anesthetic, Cooper’s heart did not metabolize the medication and he was extubated

“He wasn’t breathing on his own,” Laurel said. “His heart slowed to a point that wasn’t compatible of life.”

“Because of that damage he has a critical vision impairment and he regressed back to a newborn,” Laurel said.

Laurel said that she watched her son go from a normal, happy “walking and talking” 14-month-old to having zero facial expressions and little movement.

The year of 2015 and onward would become a painful waiting period for the Leeman family as they hoped for a heart for their young Cooper.

However, in Jan. 2017 on a routine cardiology appointment, Cooper’s echocardiogram showed completely normal function of his heart.

Cardiologists said Cooper’s heart had reformed itself with the support of medication and essentially his overall growth, Laurel said.

Staron, alongside the rest of Cooper’s team, remained hopeful and continued to monitor Cooper in the coming months. By April 2017, Cooper was completely off of his heart medication.

At the end of 2017, Cooper was not sleeping well, so his parents took him to the doctor once more. Cooper’s care team recommended his tonsils and adenoids to be removed. The Leeman’s scheduled Cooper’s surgery for Feb. 2018.

Related: Charlotte Keller will root for Hawkeyes in her home state as Kid Captain

“No matter what they did to try and continue to inflate his lungs, they just wouldn’t inflate,” Laurel said.

With the decreasing stability of his lungs, Cooper’s heart also began to suffer. Doctors at the children’s hospital urgently put Cooper on extracorporeal membrane oxygenation. Cooper’s heart function then began to improve after four days, said Laurel, but he remained on lung support for a little over 30 days.

Laurel said she watched as the pediatric intensive care unit staff came together to develop a plan for her son’s lungs. The last option the team came forward with was to place a large amount of surfactant — a liquid produced by the lungs — to help open up the ventilation in his lungs.

“Normally they do that within neonatal [infants],” Laurel said. “They wanted to do a third dose and the pharmacy said they had no more in the hospital.”

Laurel said the children’s hospital eventually gave the third dose to Cooper. Following a series of extubation trials, Laurel was worried her son would come back with more tubes and masks, but Cooper arrived back to her arms with a smile.

“You would never know that the last nine weeks happened,” Laurel said. “It was almost as if he took a nap and woke up and there was nothing wrong.”

Although Cooper will not be in attendance at the Holiday Bowl, the now 5-year-old is still excited to be recognized.

Laurel said Cooper is the happiest full-time Kindergartener — and without the children’s hospital he would not be here today.

“There were a lot of fighters with us, helping us with decisions to help make sure our journey coming home as normal as possible,” Laurel said.