Hayden Fry served as a mentor to Kirk Ferentz, and the two developed a close friendship while coaching together in Iowa City. 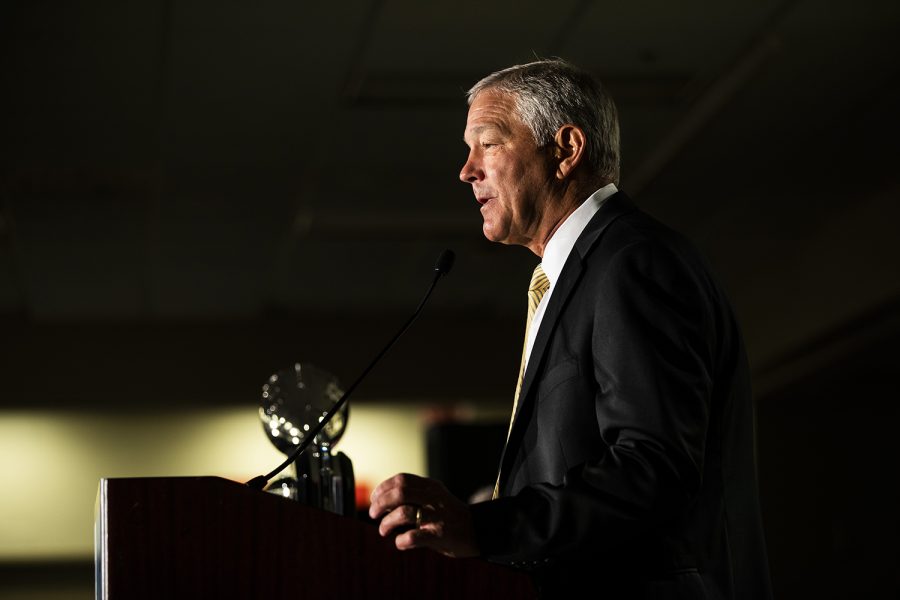 Kirk Ferentz was supposed to be in San Diego on Wednesday but made a change to his schedule after the passing of Hayden Fry Tuesday night.

Ferentz took the podium at the Hansen Football Performance Center — where Fry’s image was displayed on a video board near the entrance and whose bust was made evident for all who came in — to talk about the death of his mentor and friend.

“Certainly, it’s a difficult period right now, most importantly for coach Fry’s family,” Ferentz said. “Anybody who ever played for him, coached with him, staff members that interfaced with him, countless fans — it’s a sad day. Our thoughts are first and foremost with the Fry family. I knew how what he thought about all his kids and his wife, so it’s a tough thing.”

Ferentz came to Iowa as an assistant coach on Fry’s staff in 1981 and would continue to coach with Fry until 1989.

Ferentz didn’t exactly know what he was walking into when he first came to Iowa City.

“All I really knew was that Iowa didn’t have a very good season the year before,” he said. “I knew that Iowa had a bad record. I knew that coach Fry was a square-jawed ex-Marine and Texan. That’s about all I knew about Iowa football.”

Ferentz arrived in Fry’s third year at the helm of the Iowa football program. Before Fry came along, Iowa had not had a winning season since 1961.

Fry turned Iowa into winners, setting an example for what he expected from his program.

“Every day he set a standard for leadership, a standard for excellence, doing things with character and integrity,” Ferentz said. “That’s always what really jumped out at me before we ever beat Nebraska or any of the great things that happened in that 1981 season. Those things were already very prominent after just being here for a brief time.”

Just like countless other players and coaches, Fry gave Ferentz a chance.

Before he was Iowa’s all-time leader in wins, he was a coach in Pennsylvania who wasn’t sure he was qualified for the job he was applying for.

“He took a shot on me,” Ferentz said. “I didn’t have a resume that would merit an opportunity here, but he took a chance on me.

“More importantly, when I was here, he served as a mentor and a role model to me on a daily basis. Since that time, he’s also been a cherished friend. I can’t say enough about the role he played in my life and my family’s life. I think I speak for so many people, so many people that coached for him and played for him.”

When the time came for Fry to retire, Ferentz stepped in to become Iowa’s new head coach.

“Things happened fast when all that was going on,” Ferentz said. “We had a brief conversation. He certainly didn’t hurt my chances. I don’t want to speak for him, but I think that the hope for him was to keep it in the family. I think he was hopeful someone in the Iowa family would be the one to take over.”

In the hours since Fry’s passing, the Hawkeye community has shown overwhelming support for the Iowa legend. Numerous posts have been made in his honor on social media, and his statue in Coralville has been decorated with flowers.

That just speaks to the reach Fry had.

“Coach Fry is just a really impressive person,” Ferentz said. “Truly unique. Truly charismatic. A guy that did an unbelievable job here, but more importantly the way he impacted so many people. Certainly, in the football family, that’s evident, but it’s hard to go anywhere and not run into people that somehow, someway have a coach Fry story. His reach was really unbelievable.”

Iowa will honor Fry in some capacity when the Hawkeyes play in the Holiday Bowl Dec. 27. Ferentz said something is also being planned for next season as a whole in tribute to Fry.

While Ferentz was speaking at the podium, the video board at Kinnick Stadium could be seen through the window in the All-America room. Fry’s image was plastered on the scoreboard, keeping an eye on his friend and former assistant coach.

“It’s like your dad,” Ferentz said. “We all know your dad isn’t going to live forever, but we hope they do.”