Iowa football legend Hayden Fry died at the age of 90 on Tuesday. 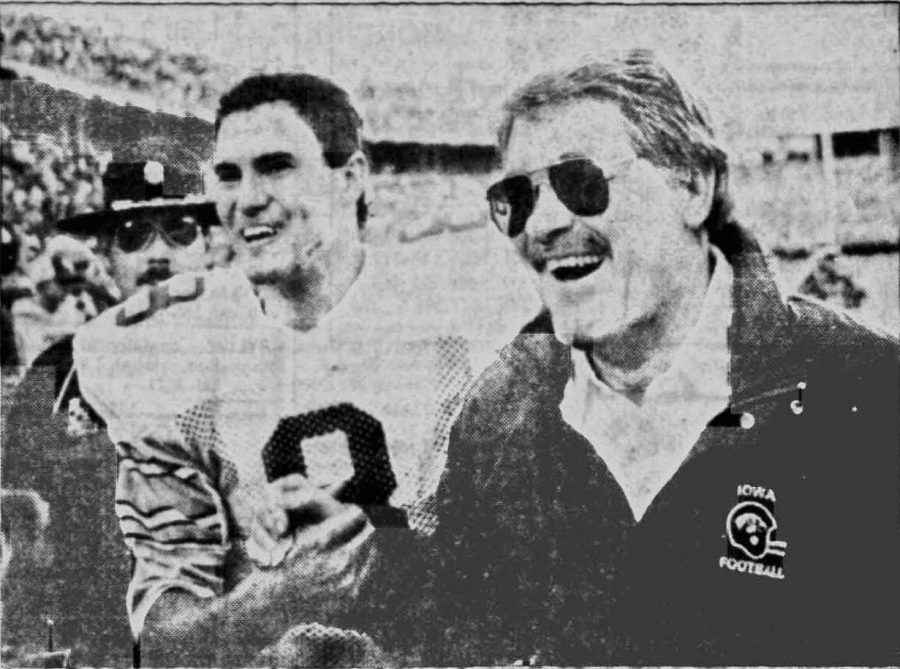 Fry is credited with turning the Hawkeye football program around and playing a key role in making it what it is today.

“We are proud to know that our father’s life had a positive influence on so many people, the players, the coaches, and the fans who played for, worked with, and supported his long and successful coaching career,” the Fry family said in a release. “His legend will live forever with the people he touched and inspired, and the programs he led to greater heights.

“Though Hayden was born in Texas and moved there more recently to be closer to our family, his love for the University of Iowa, his players and coaches, the people of Iowa, and the state of Iowa, is well known. Hayden often shared, ‘I’ll Always Be a Hawkeye.'”

Fry took over at Iowa in 1979 following a 2-9 season for the Hawkeyes in 1978. He immediately made improvements. Iowa finished the 1979 season with a 5-6 record before taking the Hawkeyes to the Rose Bowl after an 8-4 season in 1981. It marked Iowa’s first bowl game since Forest Evashevski led the Hawkeyes to a Rose Bowl victory in 1958.

The 1981 Rose Bowl started a stretch of eight seasons in which Iowa would play in a bowl game, and Fry reached two more Rose Bowls during the 1985 season and the 1990 season. He also picked up three Big Ten titles in his tenure with the Hawkeyes, with championships coming in 1981, 1985, and 1990.

Those seasons in the early-to-mid 1980s proved that Fry had officially turned the program around.

“He had a special way of making you feel good all the time even in the tough games and in the tough moments,” said former Iowa quarterback Chuck Long, who played under Fry from 1981-1985. “For me, it was after an interception. He had a way of getting you back up and confident. That feeling… not every coach has that ability, and I’ve been around a bunch of them. Not every coach has that ability to make you feel confident and be positive even in the negative situations.”

“Iowa Athletics has lost an icon, a man that raised the bar for every Hawkeye program, and every member of our athletics department,” Iowa Athletics Director Gary Barta said in a release. “Hayden was respected by everyone who knew him. His passing creates a void for all those who played for, coached with, and supported his successful tenure as our head football coach.”

Fry’s coaching tree will go down as one of the best in college football history, as 13 of his former assistants — including Kirk Ferentz, Barry Alvarez, Bret Bielema, Bob Stoops, and Bill Snyder — would take over head-coaching roles.

“His vision included hiring coaches who would be forward thinking and challenge each other,” Iowa head coach Kirk Ferentz said in a release. “If you look across college football, you will see a part of his legacy in the coaches who he hired and mentored — coaches like Barry Alvarez, Bill Snyder, Dan McCarney, Bob, Mike and Mark Stoops, and many more.”

Since he took over, Ferentz has also found success, leading Iowa to Big Ten titles in 2002 and 2004 while compiling a 161-104 record to rank fifth in Big Ten history.

“Hayden Fry is a college football icon and an Iowa legend,” Ferentz said in a release. “His Hall-of-Fame career is well known, but personally, he will always be the man who took a chance on me at the start of my coaching career. I was proud to coach with him and honored to succeed him when he retired. He’s been a great mentor and a true friend. I am forever grateful to him.”

Fry’s role off the field was just as key at Iowa.

Iowa’s famous Tigerhawk logo was created under Fry, and he invented Iowa’s “Swarm” entrance to the field. Fry also had the visitors’ locker room at Kinnick Stadium painted pink.

While his leadership on the field inspired change within the Hawkeye program, he will be remembered for both his coaching and his personality off the field.

“Even before the Hawkeyes started winning on the field, Coach Fry was beloved by the fans and trusted by his players,” Ferentz said in a release. “He had a charisma and leadership style that created a championship and winning program that continues today. In 20 seasons at Iowa, Coach Fry showed us all that you can succeed at the highest level by playing by the rules.”

Memorial services are pending and will be announced at a later date, the Fry family said.