Whitey Morgan and the 78s performed at Wildwood Smokehouse and Saloon following Them Dirty Roses to showcase their country outlaw talent. 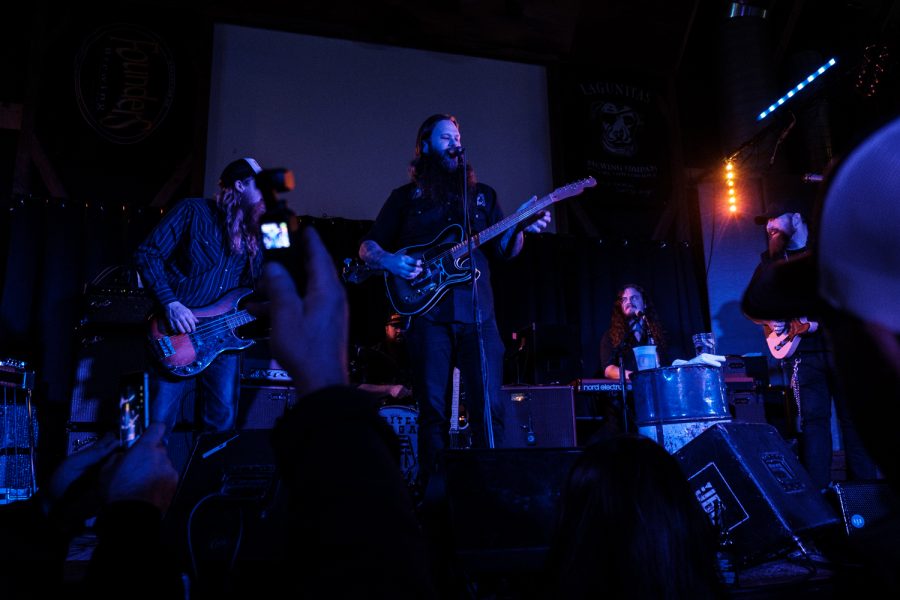 Whitey Morgan and the 78’s perform during a concert at the Wildwood Saloon in Iowa City on Sunday, December 15, 2019. (Wyatt Dlouhy/The Daily Iowan)

Multiple amplifiers scattered the stage, the projector played a kaleidoscopic light show, and the chandelier glistened with the multicolored stage lights at Wildwood Smokehouse & Saloon on Sunday night, where Whitey Morgan and the 78s performed, following opening act Them Dirty Roses.

Despite the show beginning two hours after the doors opened, the venue quickly filled up. 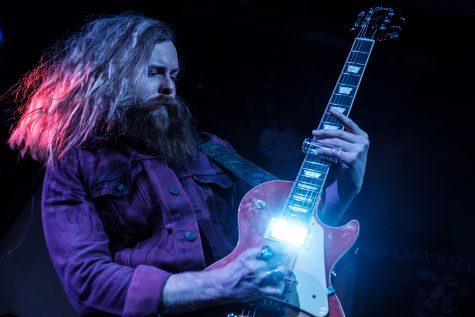 Them Dirty Roses members style ranged from an unbuttoned button-up worn by Davis, white bell-bottom pants rocked by Crain, and long hair flowing over all of their shoulders.

As the openers started to play, the audience slowly grew in energy with their loud Southern rock.

“Every bad girl loves the smell of a rose,” sang James Ford.

After a multitude of song styles, Them Dirty Roses climbed off the stage to let Whitey Morgan and the 78s up. The band crammed onto the small stage. Eric Allen, which is Whitey Morgan’s birth name, stroked his long beard before jumping right into the honky tonk ameripolitan rock music.

Allen created the stage name Whitey Morgan by using the only nickname he had, Whitey, and adding his grandfather Morgan’s last name.

“I played my first show as Whitey and there was just something different about it. I just knew that that’s what I was supposed to do,” Allen said in an interview the week before his performance.

Throughout his songs, Allen remained chill with a slight shoulder bob to the beat.

His raspy, yet rich voice filled the venue as he played his guitar and sang alongside the 78s, which include Brett Robinson on steel pedal guitar, Joey Spina on guitar, Alex Lyon on bass, Eric Savage on drums, and Tony Martinez on the keyboard.

Before Allen had the 78s, he played around the country as Whitey Morgan, and he slowly began bringing other members into the fold, and they became the 78s, based off of vintage 78 records.

Between songs, Allen asked the crowd how they felt about a drinking song, and the crowd replied in hoots and hollers.

“I know it’s Sunday and we got s— to do tomorrow,” Allen said before taking a swig of beer and playing another song.

The atmosphere on the stage was very playful. Allen played shoulder-to-shoulder with Spina, put his middle finger up at Lyon and laughed, and clinked drinks with other members.

Allen says that an outlaw in the olden days was an artist who was already signed by record labels and spitting out music. After a while, the decision was made to drop the record label.

“I don’t consider myself an outlaw,” Allen said. “I’ve always done things my own way.”

Allen showed his appreciation for his fans and the music he makes by continuing to smile throughout his performance at Wildwood.