A University of Iowa team is continuing its work investigating the brain development and motor skills of children who are at risk of developing Huntington’s disease later in life. 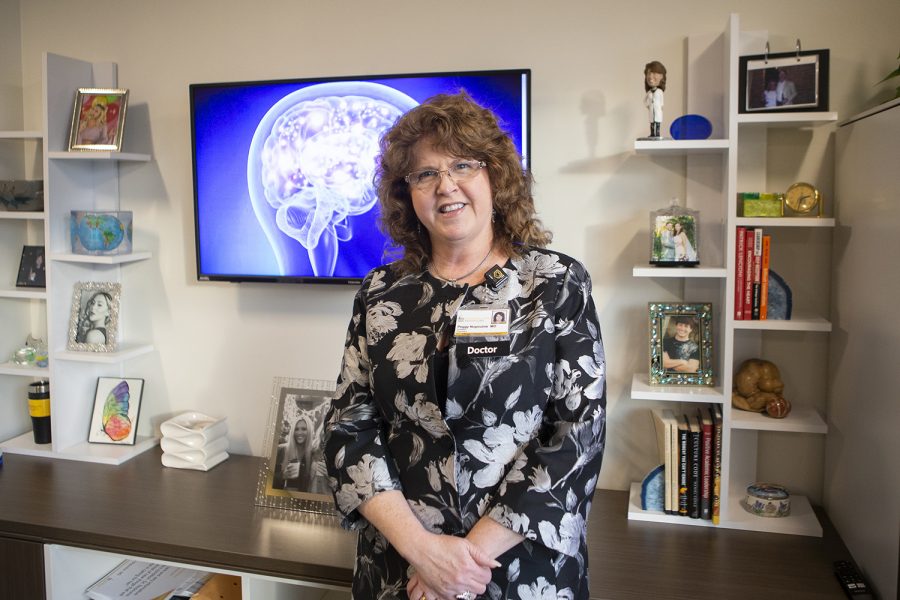 Department of Psychiatry Chair and DEO Dr. Peggy Nopoulos poses for a photo in her office in the Pappajon Pavilion on Thursday, December 12, 2019. Dr. Nopoulos is conducting research on the neurological disease Huntington’s disease. (Hayden Froehlich/The Daily Iowan.)

A decade-long investigation at the University of Iowa into the brain development of children at risk for Huntington’s disease — a fatal and incurable neurodegenerative disease — will soon expand significantly in scope.

Children who inherit the Huntington’s gene face a 50 percent chance of developing the disease in adulthood, normally by their 40s. Now, after receiving a five-year extension worth $18 million from the National Institute of Neurological Disorders and Stroke, the UI team of researchers can grow their work.

Nopoulos said mutations of the gene affect the childhood development of a middle region of the brain, called the striatum, and the cerebellum likely compensates for its abnormal development.

“One of the biggest issues is that this is research on children. No matter what, when you do research on children, they’re a vulnerable population, because potentially they could be coerced into doing research,” Nopoulos said. “We’re very sensitive about that. We make sure the children understand what they’re participating in and why.”

The research aims to discover what period in brain development can be most effective for administering gene therapy, a form of treatment that is currently being tested for its efficacy in stopping degeneration in those already suffering from the disease.

Psychiatry Assistant Professor Ellen van der Plas said the study will involve novel equipment for testing motor skills in children along with neuroimaging. Motor functions, in addition to cognitive skills and emotions, are affected by the degeneration in adults with the disease.

“We’re quantifying all these things we take for granted — [the movements of] fingers, hands, all the extremities. These are minute measurements,” van der Plas said.

Though it doesn’t have a long history of use in research on children, the Q Motor testing apparatus that will be utilized for the team will be successful for collecting large amounts of data needed for testing the development of motor skills in children, van der Plas said.

“The problem with so much data is not [to] get lost in the forest, so to say,” van der Plas said. “It looks at variation [in the data sets that will be bigger and better samples] to see if it makes a difference.”

A biostatistician on the investigating team, Douglas Langbehn, said having a full picture of how Huntington’s develops is critical to learning how to treat the disease.

“A challenge that is relevant to motivating this grant is that when we’ve studied older adults who either have it or estimated to being relatively close to having the disease, [they’re] up to 15 years away from being sick,” Langbehn said.

Although the singular gene mutation that causes the disease is known, researchers don’t yet have a clear picture for how interventions that treat the gene will affect other areas of brain development, because there are hundreds of other biological mechanisms in the brain.

“We don’t quite know what the consequences are in having this mutated protein. We don’t want to be knocking down this protein too early, because it might have serious consequences,” Langbehn said. “It conflicts with desire to treat the disease.”