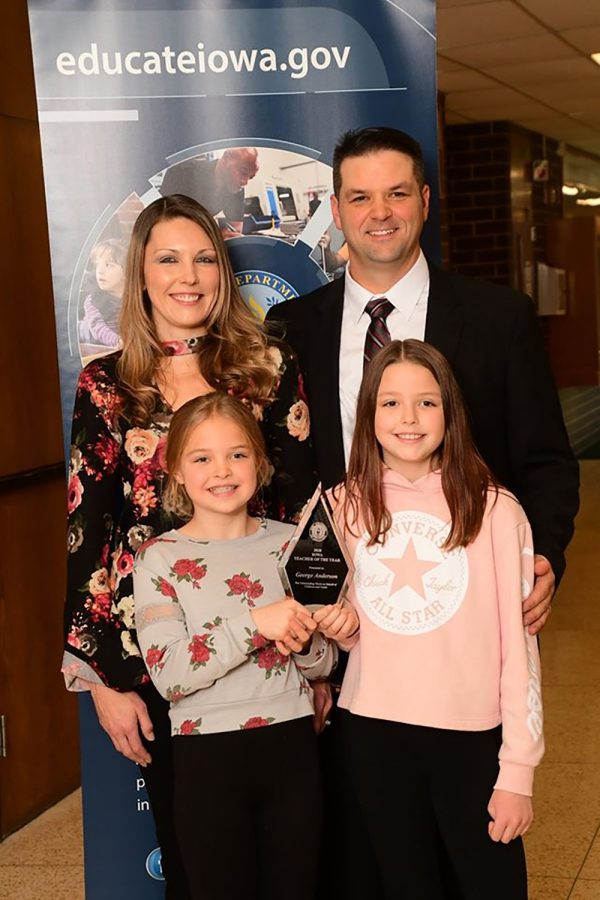 Before becoming a teacher, Cedar Rapids John F. Kennedy High School Social Studies instructor and University of Iowa alum George Anderson served as a member of the Marine Corps and a boxer — two experiences that made him realize how much he enjoyed teaching others.

Gov. Kim Reynolds named Anderson, who has spent the last 13 years teaching, Iowa 2020 Teacher of the Year earlier this month.

Anderson said he started at the UI as a history major but had some interest in education. When a professor of Anderson’s saw his potential as a teacher, he introduced Anderson to faculty in the College of Education.

“I had some great teachers who helped me when I was in high school, and then I always wanted a job that would allow me to put back a little bit of what I got and pass that on,” Anderson said.

Anderson served in the Marine Corps as a squad leader, and he realized in that job how much he enjoyed instructing the other Marines. He was also a boxer, Anderson said, and enjoyed teaching the kids on the junior team.

When he first started teaching, Anderson said his favorite area of history to teach was World War II, because he was interested in military history. As his career evolves, he has become more interested in how content can be applied to each student and how they can use it in relevant ways, Anderson said.

“They’re so applicable for everything happening today,” Anderson said. “It’s so easy, as well as necessary, for students to understand what they’re seeing online and in the news and stuff to understand the roots of those social movements.”

Teachers of the Year serve as ambassadors to education and communicate with schools, higher-education institutions, and organizations across the state, according to the Iowa Department of Education website.

“The Teacher of the Year award honors outstanding teachers who have made an impact on their students and colleagues,” said Iowa Department of Education Director Ryan Wise in a statement. “As a former social studies teacher, I was particularly enthusiastic hearing about how George makes social studies come alive and relevant in his classroom.”

Since Anderson began teaching full time in Cedar Rapids, he has been a mentor to students at the UI. Anderson was already a skilled teacher while he was a student in the education program, Hamot said.

“He had a lot of other experiences that were very important for being a social-studies teacher — his experience with the military, with the Marines and so on and so forth,” Hamot said. “… So he came in with those kinds of experiences that made him a very ahead of his curve teacher.”