The decade as it was

As a new decade approaches, the Daily Iowan staff highlights some memorable events from each year in the last decade. 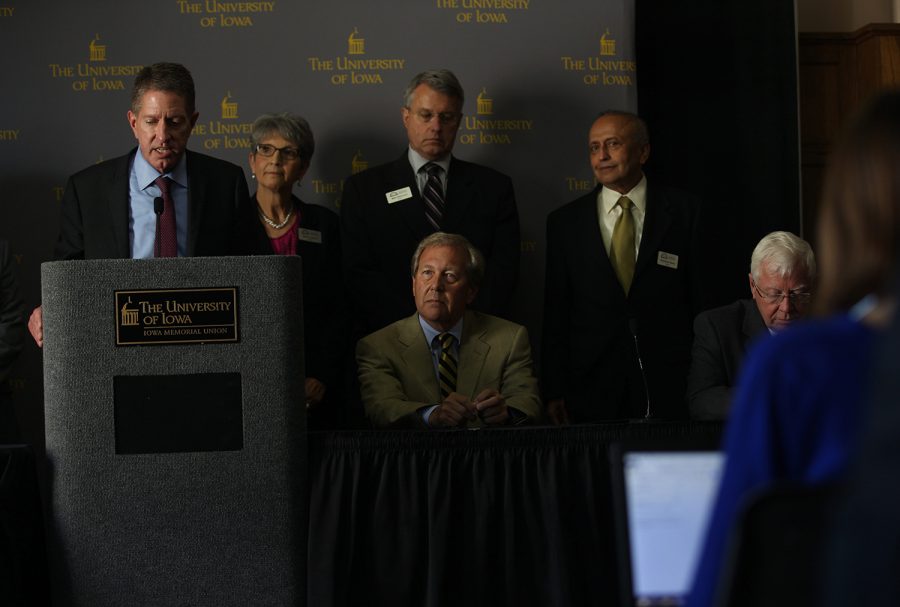 Then-Regent President Bruce Rastetter announced the newly appointed UI President Bruce Harreld during a meeting in the IMU on Thursday, Sept. 3, 2015. Harreld is the 21st president of the University of Iowa.

How will the Hawkeye State play its role in determining the next major parties’ presidential nominees as the first-in-the-nation caucus state? What will come of the University of Iowa’s recently approved utility system public/private partnership? Only time will tell, and The Daily Iowan will continue to document local history as it’s made.

With an entrance into a new decade in just a few short weeks, the DI staff reflected on the moments that defined the 2010s for the state, the University of Iowa, and Iowa City.

On June 1, 2010, the Iowa City City Council adopted the 21 ordinance, which bans underage students from being in bars after 10 p.m. (with some exceptions, including live music venues and restaurants). Initially, the ordinance was publicly voted on in 2007 – due to a high student turnout for the vote, the ordinance was struck down until its adoption in 2010.

Since the implementation of the 21 ordinance, Possession of Alcohol Under the Legal Age (PAULA) tickets in the downtown area have dropped, but arrests in the residential areas surrounding campus have increased.

Not all cases involving the 21 ordinance, however, have been negative — in October of this year, 20-year-old Daniel Burleson was arrested for showing a replica of the ‘McLovin’ ID made famous by the movie Superbad.

When 17-year-old Caroline ‘Line’ Found died in a moped accident, Iowa City West High not only lost its star volleyball player. Found’s teammates lost what they described as an “infectious personality.”

Nearly seven years after her death, the story of West High’s fight to continue its volleyball season in the midst of grief graced the big screen in The Miracle Season. Starring Oscar winners Helen Hunt and William Hurt, the film chronicled the ways West High — and the Iowa City community — banded together after her death.

UI sophomore Tom Plotkin was enrolled in the Semester in India course through the Wyoming-based National Outdoor Leadership School. Although these programs provide American students with a litany of cultural excursions in some of India’s highest villages, the DI uncovered lapses in search efforts following Plotkin’s death while on the trip.

On Sept. 22, 2011, Plotkin reportedly lost his footing and fell more than 250 feet into the Goriganga River. According to the magisterial report — the official Indian government response to the incident — the two students behind Plotkin saw him fall, and both described the path as being “slippery.”

“The first thing I said to [the School] was bring my son back,” Elizabeth Brenner, Plotkin’s mother, said. “And then I started to figure out he is not going to come back alive. Then my reaction was bring my son’s body back. And then there was the point where I just wanted to know the truth.” 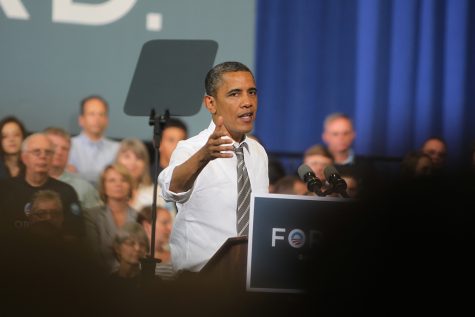 The Daily IowanCedar Rapids, Iowa- President Barack Obama speaks at a campaign event at Kirkwood Community College in Cedar Rapids. President Obama’s remarks focused on the economy and the state of US job growth.

After Barack Obama’s historic Election Day victory in 2008 as the first African American U.S. president, the former U.S. senator from Illinois won his second bid for the White House against Republican nominee Mitt Romney in 2012.

He visited the Field House on April 25, 2012 to discuss student loans and college affordability in front of more than 5,500 UI community members.

UI Journalism Professor and author Stephen Bloom was the subject of intense scrutiny after his article, Observations from 20 Years of Iowa Life, was published by The Atlantic. Many Iowans said he painted an overly-simplistic picture of life in the Hawkeye State, including former UI President Sally Mason, who said she was ‘offended’ by Bloom’s observations.

The Princeton Review ranking of the nation’s top party schools determined Hawkeyes party the hardest, with the UI landing the top spot on its list.

The UI has since continued working on its Alcohol Harm Reduction Plan and in 2018 fell out of the top 20 on the party-school rankings.

The UI unveiled its For Iowa. Forever More campaign, seeking to raise $1.7 billion in philanthropic support.

At the time the capital campaign was launched, the UI had raised slightly more than $1 billion. That campaign continued through December 2016, raising $1.975 billion with the help of 272,543 donors and surpassing its original goal of $1.7 billion.

During a February 2014 DI interview, Mason responded to a question regarding reports of sexual assault by noting the difficulty of ending it, saying, “That’s probably not a realistic goal just given human nature …”

Although Mason herself said she was a victim of sexual assault, the remarks prompted a swift response from displeased activists. In response to concerns, Mason launched a six-point plan to combat sexual misconduct.

Amid Hawkeyes’ protests and concerns about the integrity of the search process, the state Board of Regents named Bruce Harreld the 21st UI president.

Five regents met privately with Harreld in a series of separate meetings during the summer of 2015 search before narrowing down the candidate pool — an opportunity they afforded to no other candidates.

Stacked up against the other finalists — two university provosts and one college president — Harreld was the nontraditional candidate. Given his business background with a résumé touting executive roles at IBM, Kraft Foods, and Boston Market, and his experience in higher education as an adjunct professor at Northwestern and Harvard Universities, less than 5 percent of respondents in an American Association of University Professors survey reported feeling he was qualified for the job. 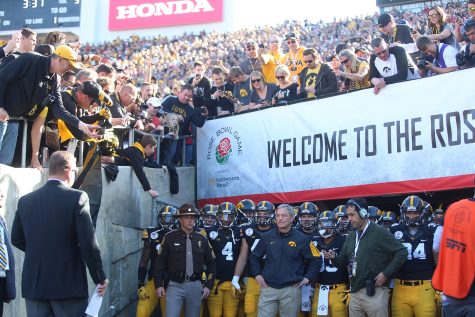 Alyssa HitchcockIowa fans cheer for the team as they prepare to run out of the tunnel before the Rose Bowl Game in Rose Bowl Stadium in Pasadena, California on Friday, Jan. 1, 2016. Stanford defeated Iowa, 45-16.

The frustrations over the search process combined with skepticism surrounding Harreld’s business background prompted several protests from Hawkeyes who deemed him unfit for the role.

The Hawkeye football team finished the 2015 season undefeated, surpassing modest expectations for the season and winning all 12 regular-season games.

After losing the Big Ten Championship to Michigan State, the Hawkeyes went on to face Stanford on New Year’s Day at the 2016 Rose Bowl in Pasadena, California, where they lost  45-16.

Donald Trump stunned the country on Nov. 8, 2016, when he secured enough votes to win the Electoral College and defeat Democratic candidate Hillary Clinton to become the 45th U.S. president. The day after Trump won, protesters took to the Pentacrest to express their resentment of his campaign rhetoric against underrepresented groups and the immigrant population.

Around a month after Election Day, Trump chose then-Iowa Gov. Terry Branstad as his pick for U.S. ambassador to China. His ties to China keep Iowa into the world spotlight as the trade war rages on between the two world powers. 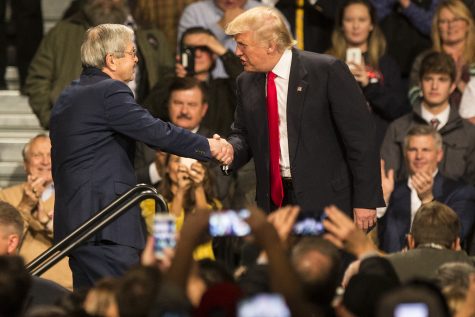 Joseph CressIowa Governor Terry Branstad shakes hands with President-elect Donald Trump after being appointed as Trump’s ambassador to China during an event for President-Elect Donald J. Trump and Vice President-Elect Mike Pence in Des Moines on Thursday, Dec. 8, 2016. Trump and Pence are completing a Thank You tour across the country.

The greek leaders said in a statement that there is a “pervasive and dangerous alcohol culture that exists within” the greek community. That ban on the question of culture change within the community remains heading into 2020.

A jury awarded former UI Senior Associate Athletics Director Jane Meyer $1.43 million on May 4 in a discrimination lawsuit against the UI. Meyer contended that she was discriminated against for her gender and sexual orientation when she was removed from the Athletics Department after speaking out against the firing of her partner, former field-hockey coach Tracey Griesbaum.

After Meyer’s victory in the courts, the UI announced it would hire an independent firm to investigate employment practices, beginning with the Athletics Department. 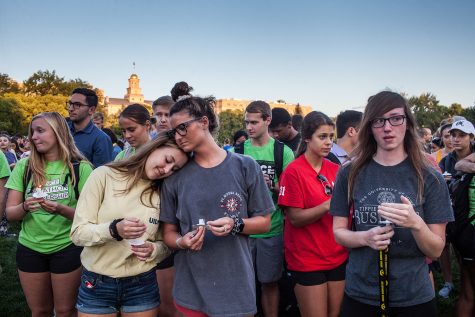 The story of UI student Mollie Tibbetts shocked the nation after she was found dead following a search that lasted more than a month.

Tibbetts had been missing since July 18, 2018, when she disappeared while on a run in Brooklyn, Iowa. Authorities said Cristhian Bahena Rivera, the man charged with her murder, led investigators to her body in a cornfield in Poweshiek County.

Bahena Rivera is set to face trial in February 2020. A judge has not yet ruled on whether his rights were violated during questioning by law-enforcement officials, which could result in his confession to Tibbetts’ first-degree murder being tossed out as evidence.

Midterms mark a win for women

The November 2018 election marked a victorious night for women.

Kim Reynolds became the first elected female governor in Iowa’s history. She had served in the state’s top executive post since spring of 2017 following Branstad’s appointment as U.S. ambassador to China.

The regents gave the green light Dec. 10 to the UI’s public/private partnership, a deal which will bring the university $1.165 billion in an upfront lump sum in exchange for a private entity to operate and maintain the utility system for 50 years.

Much remains to be seen about the agreement and its implications for the UI’s future. Critics condemn the deal as lacking transparency and risking state assets, while administrators and regents tout the partnership as opening a new revenue source to maintain the institution’s quality. Reynolds also lauded the deal as being “historic” and a model for other similar partnerships.