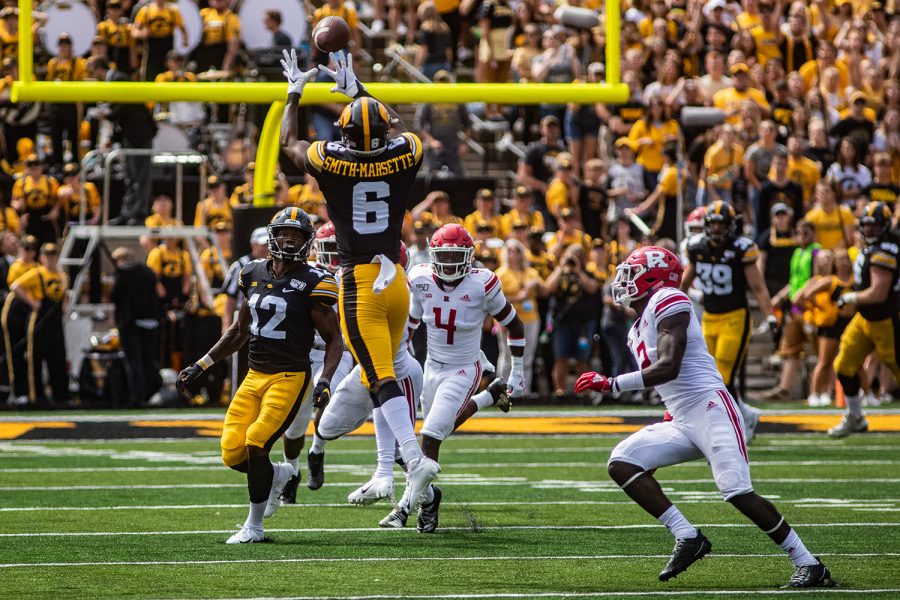 Iowa wide receiver Ihmir Smith-Marsette catches the ball during a football game between Iowa and Rutgers at Kinnick Stadium on Saturday, September 7, 2019. The Hawkeyes defeated the Scarlet Knights, 30-0.

Ihmir Smith-Marsette and Brandon Smith arrived in Iowa City as raw freshmen but have since became leaders for Tyrone Tracy and Nico Ragaini.

In 2017, Ihmir Smith-Marsette was a 159-pound undersized freshman receiver embarking on his journey of college football. He fumbled in his first game.

That same year, Brandon Smith was a 6-foot-3, 219-pound freshman wide receiver who oozed athletic potential. He finished the season with three catches for 12 yards.

But they’ve gotten older. They’ve improved on the field. They’ve grown off the field.

Fast forward to any picturesque Saturday in Kinnick Stadium, and it’s almost a guarantee that one of them will be making a big play.

Smith and Smith-Marsette closed the regular season as Iowa’s top two receivers with a combined 1,083 yards and eight touchdowns, and behind all the numbers they’ve put up, they’ve served as leaders for the next wideouts in line: Tyrone Tracy and Nico Ragaini.

“We kind of threw them in the water before they really could swim two years ago,” Iowa head coach Kirk Ferentz said. “We had to. It was just the situation we were in. And they dealt with that fine. They worked through it and all that, but it’s fun to see them now really learning how to play.”

“They’re having more fun than they’ve ever had, and both of them have tremendous attitudes. They’re good practice players. They have a smile on their face. They enjoy being out there. They’re good with their teammates. And as a coach, you value that as much as you do their production, although I’m not minimizing their production; it’s been pretty good, too.”

There’s been a long line of leadership in the wide receivers’ room inside the Stew and LeNore Hansen Football Performance Center next to Kinnick.

Matt VandeBerg served as C.J. Beathard’s go-to option in 2015 and 2016. In 2017, Nick Easley learned from him. That’s the same year Smith and Smith-Marsette entered the program. In 2018, Easley, Smith, Smith-Marsette, Tracy, and Ragaini were all in the program at the same time, with Tracy and Ragaini redshirting.

One year later, when Smith went down with an ankle injury late in the fourth quarter against Purdue on Oct. 19, the Hawkeyes needed Smith-Marsette and the rest of the group to step up.

That’s when it happened — the revelation that Iowa’s receiving corps was one of the strongest position groups of the team, something that hadn’t been true since the Marvin McNutt-Derrell Johnson-Koulianos days in 2010.

It’s been Smith and Smith-Marsette leading the way in the air attack, with Tracy and Ragaini keeping pace behind them.

“Looking back on the years, we were young guys — we ain’t know nothing from nothing,” Smith-Marsette said. “Just being able to grow and learn the system, take advantage of everything. It’s been great. Being able to go out there and experience college football, Big Ten football, it’s helped us elevate our game.”

While the two older wideouts have paced the unit, the younger members of the group have followed closely.

After scoring his first-career touchdown against Rutgers in Iowa’s second game of the season, Tracy took the reins as a playmaker while filling in at Smith’s ‘X’ position.

Surrounded by four Wildcats in Iowa’s 20-0 win over Northwestern, Tracy slipped out of a tackle and utilized his elusiveness to take a Nate Stanley pass 50 yards for a touchdown.

He finished the game with 88 yards and a touchdown before going for 130 yards and another score the next week against Wisconsin.

It was a welcomed change in production for Tracy, who had been the third option in the passing game to that point. Smith and Smith-Marsette set the stage all season. Then, Tracy took advantage when given the opportunity.

Tracy now ranks second on the team with 589 receiving yards and three touchdowns.

A few weeks later, when Iowa took on Nebraska, Smith-Marsette took a reverse 45 yards for a touchdown on the Hawkeyes’ second drive and returned a kick 95 yards for another score one quarter later. Full circle.

Whether it’s Smith-Marsette or Tracy making the play — the teacher or the student — Iowa has benefited as a whole from the knowledge that has been passed down for years.

“They are great leaders in the room,” Tracy said. “They push us through everything. All the adversity, they push us through it. When we need a big play, we go to Ihmir or B. Smith, and usually, most of the time, they come through for us.”

The same has been true for Ragaini, who served as a security blanket for Stanley, resembling the role Easley played for the Hawkeyes in 2017 and 2018.

“Nico was a guy who came into the program, and right from the start, he worked really hard,” Easley said. “He was always constantly asking me questions and trying to soak up and learn as much from me as he could. I really appreciated that about him.”

Despite his injury, Smith has still found a way to play an instrumental role in the development of the other receivers.

He’s still at every meeting and dresses for games. He’s still going through warmups at full speed as recently as the Nebraska game. He’s still making the impact that has been associated with his name all season. It just comes in a different way.

Smith’s injury shuffled things around position-wise, but that hasn’t stopped the group from making the plays it did early in the season.

“With B. Smith out, Ihmir’s had to play another position that he usually doesn’t play, and he’s done a great job,” Ragaini said. “Some throws he usually gets at ‘Z’ he’s watched other people get, and he’s continued to be such a leader like we expect him to be. Just great leadership from Ihmir and B. Smith as well.”

When the 2019 season arrived, questions plagued Iowa’s playmakers. With Noah Fant and T.J. Hockenson — the Hawkeyes’ two leading receivers last season — off to the NFL, fans and experts alike weren’t sure what to expect with a young core.

Those questions were answered quickly.

There hasn’t been a group of four wide receivers that have recorded at least 350 yards each under Ferentz until this season. What Smith, Smith-Marsette, Tracy, and Ragaini have done in 2019 is special. It should be remembered for years to come.

When so many questions surrounded the unit, it stepped up.

“I’m just proud of this group,” Easley said. “To see how far the wide receiver position at Iowa has come in the last three or four years, since I’ve been there. It went from a room that was pretty bare — there wasn’t a lot of options in that room, to one of the strongest position groups on the team.”