Senior Column: Grappling with graduation from The Daily Iowan

Dan Gable’s statue at Carver-Hawkeye Arena proclaims (no) Stalling. In a way, that’s exactly what I’ve learned over the past year. 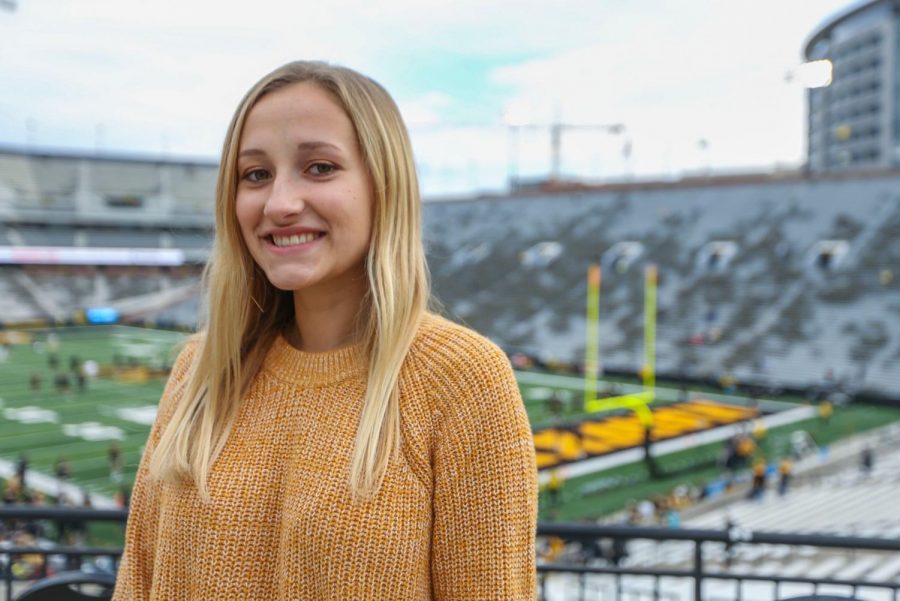 Tom Brands yelling was the start of the semester that changed my life.

In my second year as a sports reporter, I decided to suck it up and cover wrestling. I hated the sport in high school and chose to cover three different winter teams instead of it during my sophomore year.

Then, in one of my first encounters with the Iowa wrestling program, Brands called out a reporter during his press conference. I was intimidated instantly and had no idea what I had gotten myself into.

We went downstairs to the wrestling room, and someone tapped me on the shoulder. There was Brands. He said hi and asked if everyone was treating me OK. I said yes, but it wasn’t always that way.

A little over a year ago, I was told by a coworker that I didn’t know what I was talking about because I’m a woman wrestling reporter — in those exact words.

I was forced into a sink-or-swim situation where I had to either trust myself or give up. So, I trusted myself, and I had the trust of the people who mattered most to me.

I took charge of the wrestling beat, and the last thing I wanted to do was rely on anyone else for the content that I needed to put out on a weekly basis. My writing had grown in that semester from covering football, but I never really noticed it until there was a doubt that it might not be good.

At the NCAA wrestling championships in March, that comment from earlier in the season was on my mind. Instead of letting it live rent-free in my head, I turned it into being proud of myself. I wrote 11 full-length stories in three days and countless other briefs. If I had a free minute, I was writing something else to keep continuity through the content that I was putting out.

It was hectic and I was stressed constantly in Pittsburgh, but in the best way. I had to sneak into a corner of the floor to make sure I was available for interviews while still watching the match, I secured myself a spot by the mat for the finals, and I didn’t have time to think about people thinking I wasn’t the best person for the job.

That weekend made me realize how much my writing had improved through the sports section. My writing would be nowhere near what it is today if it wasn’t for The Daily Iowan.

I tell my reporters now, read the stories that the pregame staff puts out. Find someone you look up to, read their writing and always strive to be at that level even if you know you’ll never make it. Shout out to Adam Hensley, thank you for being that person for me and for pushing me to be my best.

Being the sports editor this semester has come with its challenges. I was always stressed and always busy, caught between work and school and applying/interviewing for jobs.

From losing my mind every week because of pregame and almost crying laughing during every podcasting session, I can’t thank Pete Ruden, Robert Read, and Pete Mills enough for keeping me sane. Also, Shivansh Ahuja, who has become an honorary member of the sports section and who 100 percent is my go-to wrestling photographer.

I’d be lying if I said I won’t miss the DI, but this semester seems like the right one to go out on. Thank you for giving a stressed-out freshman the opportunity to pursue a dream, and for giving me a home within sports.

And finally, for the little girl obsessed with sports: never let anyone tell you you’re not good enough. I promise you, you are.