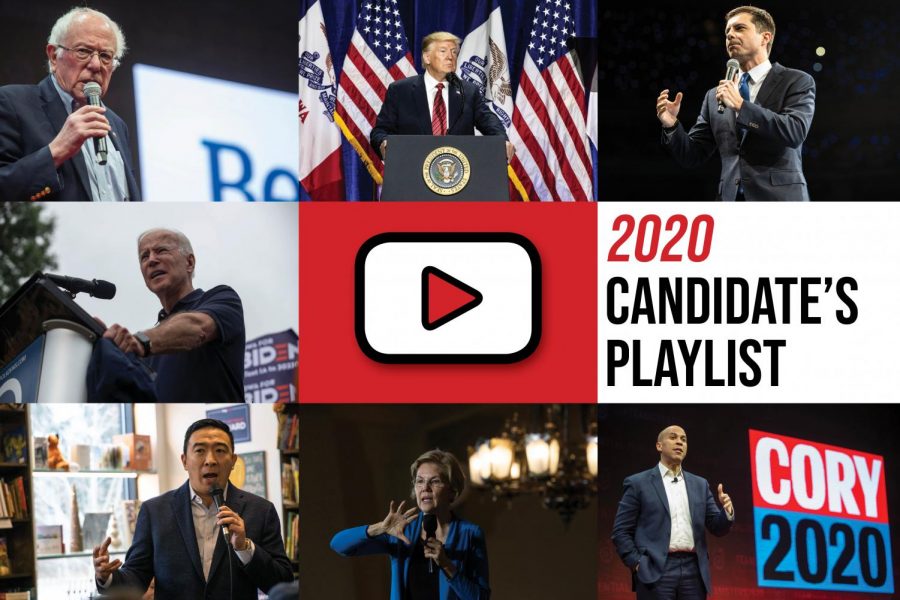 The crowds of Iowans who attend political rallies are familiar with long waits, shifting from foot to tired foot and bouncing slightly to the background music while wishing they brought a snack.

These crowds are also familiar with the stillness just before a candidate’s “walk-on” song plays.

A podium stands alone next to the Old Capitol Building as the flag atop of the gold dome ripples gently.

Cars slow near Gilbert Street to see why a crowd has gathered on a Monday, but no one honks. Instead, curious heads swivel to catch a glimpse of the platform.

An American flag hovers over an empty stage near the IMU as the sun sets over the Iowa River. The sky, full of purple and pink, creates dramatic lighting for a scene already filled with anticipation.

The crowd comes alive, waving signs and cheering. It is as though a switch has been thrown. This song is the signal the crowd has been waiting for: the person they have watched on TV and waited to see for hours is about to appear. As speakers blare, children, students, and adults clap until their hands sting and shout until their throats burn.

Bernie Sanders takes his place behind the podium. Pete Buttigieg steps onto a raised platform. Elizabeth Warren climbs the stairs and takes the microphone. All of them wave, all of them smile, and all of them blast the song they’ve chosen as their anthem.

In response to 2020 Iowa Democratic caucuses, each candidate has spent her or his fair share of time in Iowa. Candidate John Delaney even visited every single county in the state, so it’s not an exaggeration to think of Iowa as the political “belle of the ball.”

These rallies are accompanied by a brand-building tool that each candidate uses to their advantage: a campaign playlist and “walk-on” song.

Timothy Hagle, UI professor of political science, said the music entertains people during long waits, matches the atmosphere of an event, and helps maintain a candidate’s brand through types of artists, genres, and lyrics.

“[Candidate’s music] can be reactionary or it can build messages and ideas …” Hagle said. “Trump uses ‘You Can’t Always Get What You Want’ by the Rolling Stones. It seems like more of a response to people who don’t like him, like he’s trolling them.”

Listen: ‘You Can’t Always Get What You Want’ by the Rolling Stone

As candidates come and go in Iowa, it’s important to look at the messages they value in music. Unlike understanding policy and tuning into debates, music is accessible and understandable to all, no matter political experience.

“[Music choice] reflects the candidate as a decision maker: their choices, what they’re deciding to emphasize about themselves as candidates, who they’re trying to reach,” Mathew Swiatlowski, Professor of American Studies, said. “All these things matter. Culture matters.”

Here is the list of seven candidates’ walk-on songs for your listening and politically analytical pleasure.