The Iowa men’s basketball team owns the top offense in the nation, according the KenPom ranking system. 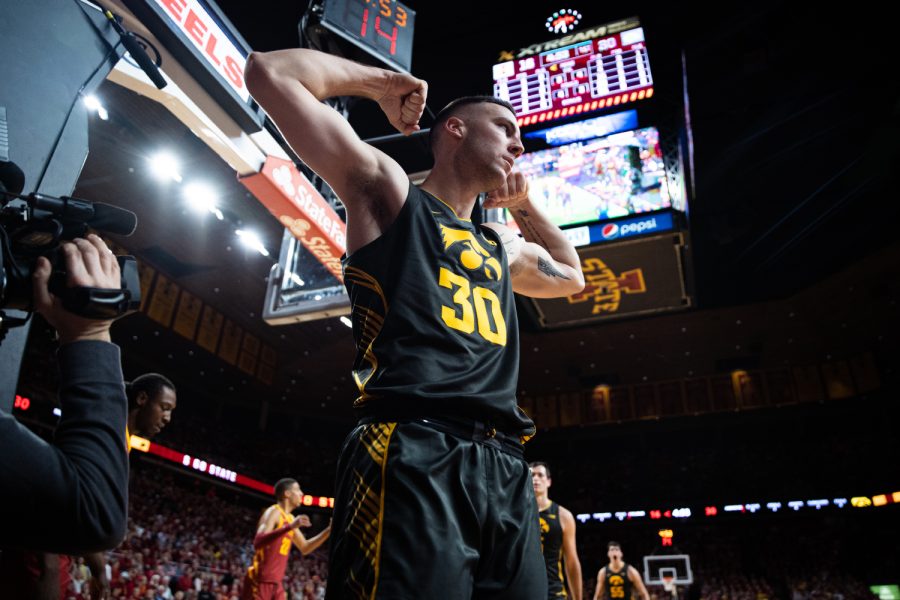 Iowa’s Nov. 11 blowout loss to DePaul had fans questioning whether the season had already been lost. Now, nine games later, the Hawkeyes have hit their stride — particularly on offense.

According to KenPom.com, the Hawkeyes are No. 1 in the nation in offensive efficiency through 11 games.

Leading the offensive surge that Iowa has shown this year is center Luka Garza. The junior has played like an All-American early this season and is the Big Ten’s top scorer with 22.4 points per game.

It has not been a one-man show for the Hawkeyes, however.

This year’s squad may be the best shooting team head coach Fran McCaffery has had at Iowa. Threats on the perimeter — such as Jordan Bohannon, CJ Fredrick, and Joe Wieskamp — are capable of making shots from anywhere on the court.

Even Connor McCaffery is a threat from deep this year.

McCaffery has already taken the same number of 3-point attempts this season as he did in 2018-19. He has also surpassed the shots he made from deep all of last season.

Adding McCaffery into the mix as an offensive weapon has elevated the Hawkeyes on that end of the floor this season. Defense has been the area where Iowa has been exposed.

In its three losses this season, the Hawkeyes have allowed 93, 83, and 103 points to DePaul, San Diego State, and Michigan, respectively. The defense has been better as of late.

Iowa allowed only 52 points to Minnesota in its Big Ten home-opener. A game later, Iowa State only put up 68 points against the Hawkeyes.

As long as Iowa’s defense continues to improve, its offense can compete with any team.

“I think you see our defensive intensity sticking through the game for more and more minutes every time out,” Connor McCaffery said. “That’s something we are going to continue to work on. The more defense that we can play throughout the game, the better we are going to be. We are going to score. We can score on anybody — it doesn’t matter.”

The success on offense for Iowa has come despite some early season adversity.

The Hawkeyes have been hit with a slew of injuries, but they have continued to produce nonetheless.

“I think that the toughness that we show is because we’ve been hit with some adversity early in the season in terms of injuries, sickness, guys being out,” Connor McCaffery said. “CJ and Cordell don’t play at Syracuse. [Bohannon] is banged up. Luka sprained his ankle in practice. All kinds of stuff. We’re battling through, and I think it’s showing on the court.”

Toughness may be the one word to describe Iowa this year, and no player exemplifies toughness like Garza.

Garza’s face is seemingly bleeding every game, but that does not prevent him from producing. That’s been contagious for Iowa this season.

“I just think everyone is a hard worker,” Garza said. “Coach recruits guys like that — tough-minded guys who just battle through everything and play. Everyone on our roster from the top to the bottom is like that. That’s just how we’re built.”