The Trojans bring a lethal passing game into their matchup with the Hawkeyes in the Holiday Bowl. 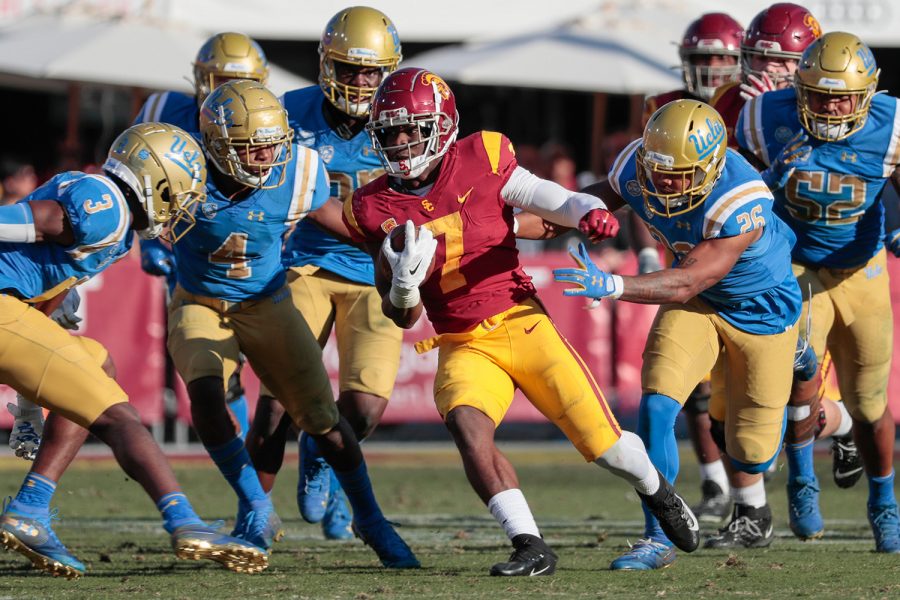 Only one game stands in between Iowa and its first 10-win season since 2015. That game, however, comes against an unfamiliar foe with a lethal passing attack.

When the Hawkeyes face off against USC in the Holiday Bowl on Dec. 27, it will be the first meeting between the two schools since they met in the 2003 Orange Bowl.

The Trojans have been led by freshman quarterback Kedon Slovis after starter J.T. Daniels went down with an injury in USC’s season-opener against Fresno State.

Despite his inexperience, Slovis has excelled for the Trojans this season.

The Pac-12 Freshman of the Year finished the regular season with 3,242 passing yards and 28 scoring strikes through the air. Slovis’ poise combined with a talented receiving corps has created a stellar passing game this season.

USC has three different receivers with over 800 yards this season. Most impressive among them is senior wide receiver and Biletnikoff Award finalist Michael Pittman Jr.

Pittman hauled in 95 passes for 1,222 yards and 12 touchdowns in head coach Clay Helton’s air raid offense this season. His ability to take over a game at any moment was apparent all season long, perhaps never more so than against Colorado.

Heading into the fourth quarter of an Oct. 25 matchup against the Buffaloes, USC trailed 31-21.

Then, Pittman did what he does best. The senior receiver caught two touchdown passes in the final 12 minutes of game time.

The first score came with 11:25 remaining in the fourth quarter.

The Trojans lined up with four wide receivers out of the shotgun formation on first down. Pittman lined up to the far left of the field and ran a vertical route straight up the field. The slot receiver ran a post route, which forced the safety to move into the middle of the field.

The left Pittman. one-one-one deep down the field, something USC took advantage from for the touchdown.

Later in the game, the Trojans found Pittman Jr. again.

With 2:24 remaining in the game, USC lined up with Pittman Jr. by himself on the left side of the field, with trips on the other side. All three receivers on the right side of the field ran vertical routes, allowing Pittman. to catch the ball on a crossing route and weave his way through Colorado’s defense for the game-winning touchdown.

As a unit, Iowa’s defense ranks fifth in the country, allowing 13.2 points per game.

USC’s passing attack will be the emphasis for the Hawkeyes, as the Trojans have often struggled running the ball this season.

Whereas USC owns the fifth-best passing offense in the country, it’s ranked 110th in rushing offense. The Trojans average 338 yards per game through the air but only 127.8 on the ground.

Running back Vavae Malepeai is USC’s leading rusher this season with 466 yards.

When the Hawkeyes and Trojans battle in SDCCU Stadium for bowl game bragging rights, two of the nation’s best units will go head-to-head.

The battle between USC’s potent passing game and Iowa’s stout defense will determine whether the Hawkeyes earn win No. 10 on the season or if the Trojans head into next season with momentum.