Around the Big Ten: Bowl Edition

"Nothing quite like kicking back and watching football on Jan. 1." 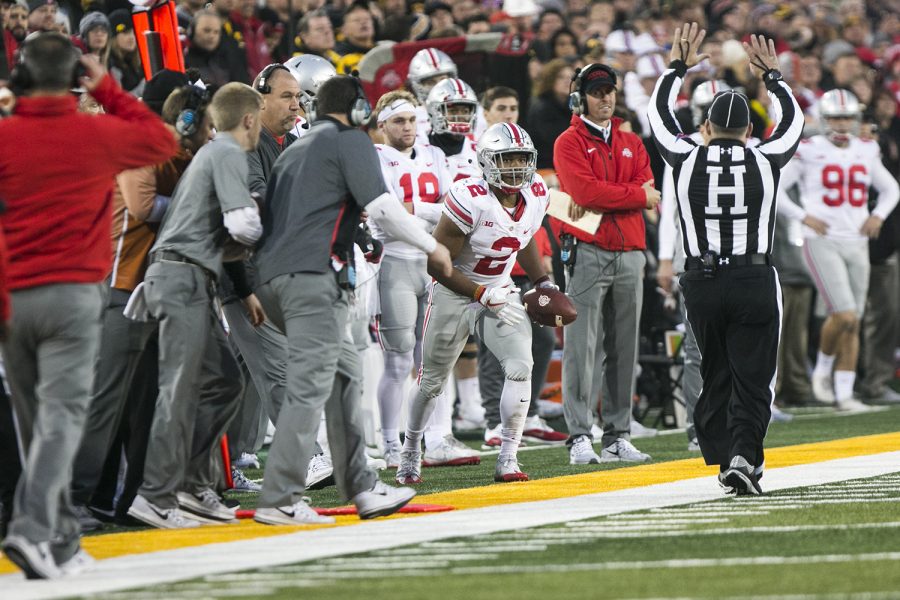 Ohio State running back J.K. Dobbins looks to an official during the Iowa/Ohio State football game in Kinnick Stadium on Saturday, Nov. 4, 2017. The Hawkeyes defeated the Buckeyes in a storming fashion, 55-24. (Joseph Cress/The Daily Iowan)

This is the game Iowa fans watch when they’re sick of talking to family members and are waiting for the real action to start.

Iowa fans might complain about going to Florida all the time, but I don’t think they understand that it gets chilly in San Diego when the sun goes down. Pro tip: Even if you don’t think you need a jacket, pack a jacket.
Dec. 28
Goodyear Cotton Bowl Classic

Penn State can take comfort in the fact that everyone watching this game is just waiting for Ohio State-Clemson. Always the little brother of the Big Ten East.

The one time Ohio State can’t complain about being left out of the College Football Playoff, and they still find a reason. You didn’t show up for the entire first half against Wisconsin. That’s not the look of a top-ranked team. Get over it.
Dec. 30
Redbox Bowl

I couldn’t give a hoot about the other unranked Big Ten bowl game matchups, but this one is going to be interesting. Will Illinois’ fans travel? Will this be a disaster shown on nationwide television or a story of hope for teams that were very bad last year?
Jan. 1
VRBO Citrus Bowl

I had to do a double-take when I saw No. 9 and Alabama in the same line, much less the fact that it’s going up against Jim Harbaugh and his crew of khakis. Both the game and the fact that Alabama is no longer in the playoffs makes this one very fun.

Things Iowa fans always complain about that Minnesota would NEVER complain about: having a 9-3 (or better) regular season and going to the Outback Bowl.

I heard a Penn State fan complaining over the week about how it should have gotten into the Rose Bowl. The loss to Illinois aside, Penn State lost to Minnesota and Wisconsin beat Minnesota. It’s the transitive property of reasonable bowl picks at its finest.
Jan. 2
TaxSlayer Gator Bowl

There’s got to be a better game on than this at 6 p.m. on Jan. 2. I really feel like it’s impossible for there to be a worse game, so it only goes up from here, right?