After trolling Iowa State with his shoes, Jordan Bohannon is raffling off his footwear to raise money for the University of Iowa Stead Family Children's Hospital. 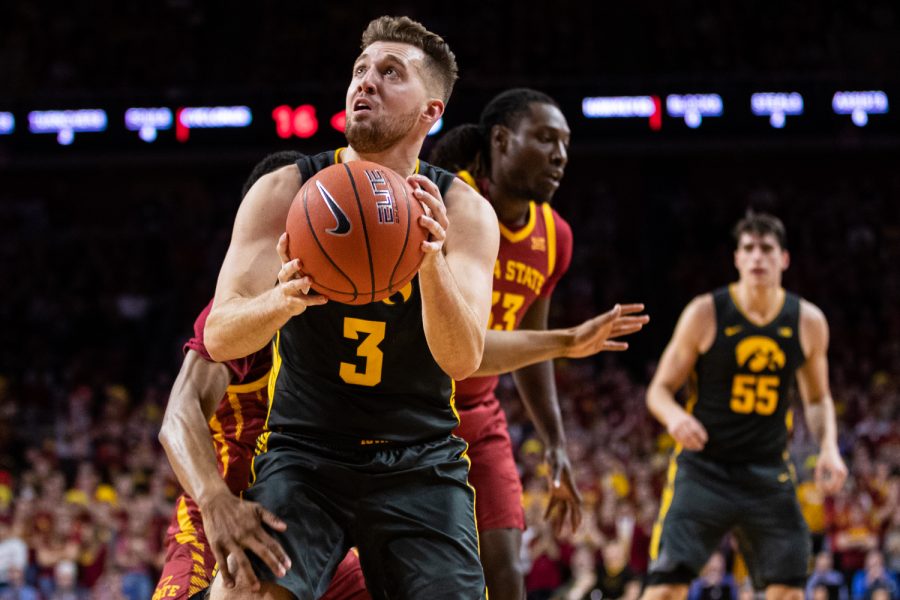 Iowa guard Jordan Bohannon looks to the backboard during a men’s basketball match between Iowa and Iowa State at Hilton Coliseum on Thursday, Dec. 12, 2019. The Hawkeyes defeated the Cyclones, 84-68. (Shivansh Ahuja/The Daily Iowan)

After writing “To ISU: Thanks for memz” on his shoes and placing them on the Hilton Coliseum hardwood following Iowa’s win over Iowa State on Dec. 12, Jordan Bohannon is creating more memories for his Hawkeye career.

Bohannon announced on Twitter that he will raffle off the signed shoes and donate the proceeds to the University of Iowa Stead Family Children’s Hospital.

Raffle tickets cost $10 and can be paid to @JboISUMemzShoes on Venmo.

Bohannon tweeted a screenshot of the account’s Venmo account on Saturday afternoon with more than $10,000 garnered — about 15 hours after the first announcement.

Former teammate and current Cleveland Cavaliers and Canton Charge forward Tyler Cook tweeted he would buy 30 raffle tickets but wouldn’t take the shoes from a fan if he were to win.

Put me down for 30 tickets bro❤️ #FTK

Bohannon has yet to announce when the raffle will take place.

The Marion, Iowa, native scored 12 points in the Hawkeyes’ win over the Cyclones and is averaging 8.8 points per game. Iowa will take the floor next on Dec. 21 when it takes on Cincinnati in Chicago at 8 p.m.