The center, part of the University of Iowa College of Law, has worked to study human rights for the last 20 years. 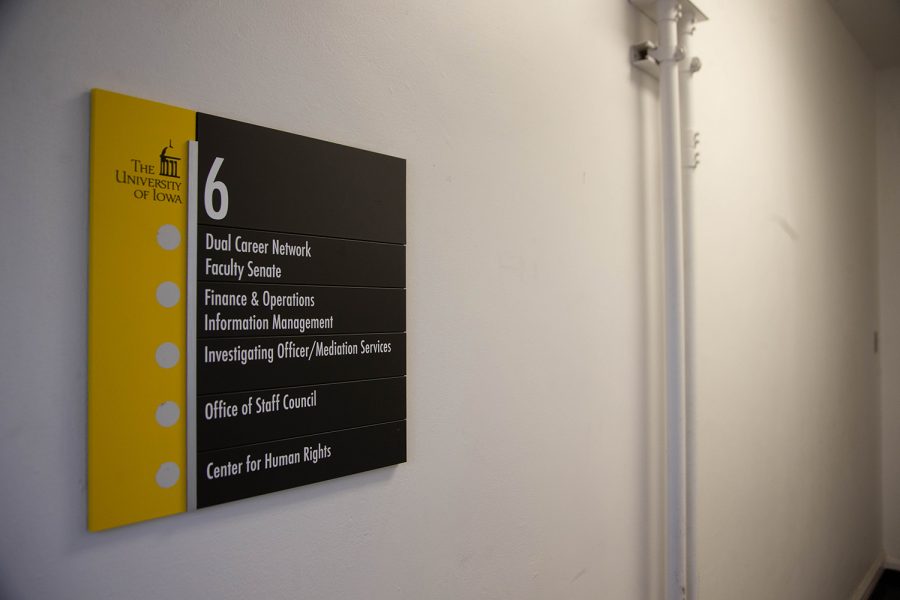 A directory sign is seen on the wall of the Jefferson Building on Dec. 9, 2019.

When former University of Iowa Law Professor Burns Weston brought a series of Nobel Prize speakers to Iowa City in 1998, the series turned into something more — leading to the creation of a university center for human rights.

This year, the UI Center for Human Rights is celebrating 20 years of teaching and scholarship in Iowa City and beyond.

The idea to form a human-rights center came about when Weston presented the idea of bringing Nobel Peace Laureates to campus to celebrate the 50th anniversary of the U.N. Human Rights declaration, said the center’s website.

Following the success of the “Global Focus ‘98” summit, Burns and other faculty members came together to create the Center for Human Rights in 1999.

Adrien Wing, the current director of the Center for Human Rights and the associate dean for international and comparative law programs, was involved with the creation of the center.

“That was the dream of my former mentor — he put together, along with myself and other people, a whole year of Nobel Prize-winning speakers,” she said. “Out of that momentum, we were able to interest the university in creating the center that we now have and have had for the past 20 years. We started out with this big bang, so that was incredible.”

The center is engaged in projects in the Iowa City area as well as research with a more global reach, Wing said. The center is also the home of the undergraduate human-rights certificate.

Assistant Director Gregory Hamot said some of the most impactful programs the center has created include the Child Labor Research Initiative.

“I think the Child Labor Curriculum for middle-school kids and high-school kids was kind of a landmark piece — it’s a closed area for schools to talk about, it’s kind of a sensitive topic,” he said. “The group of teachers that we pulled together, they were able to make it into a curriculum that was extremely usable to teachers around the world.

“Human rights is something that doesn’t just happen or exist in university spaces, but hopefully we are educating and engaging people beyond our immediate campus environment,” he said.

The center faced uncertainty in 2013 when the Provost’s Office announced it would discontinue funding for the center. The center eventually moved to the College of Law, its current home.

Brian Farrell, an assistant director at the UI Center for Human Rights, said the center gives the College of Law a chance to partake in undergraduate teaching.

“There’s value in having a collegiate home for a center, I think that’s something that adds stability and stronger relationships. That was something that the university administration was looking for in 2013 — they wanted to find a college to be a home for a number of centers,” he said.

Wing said she would like to see the center expand in the future.

“I would love to see the center grow so that it could have a full-time staff, rather than everybody being part-time,” she said. “If you had a full-time staff, a full-time director, and could also have substantial funding so that we could expand the number of programs that we operate — there are centers across the country who have their own building.”