A new “AIM” library card created as a result of the partnership between the Iowa City School District and the Iowa City, North Liberty, and Coralville libraries gives students access to more literary materials in the area. 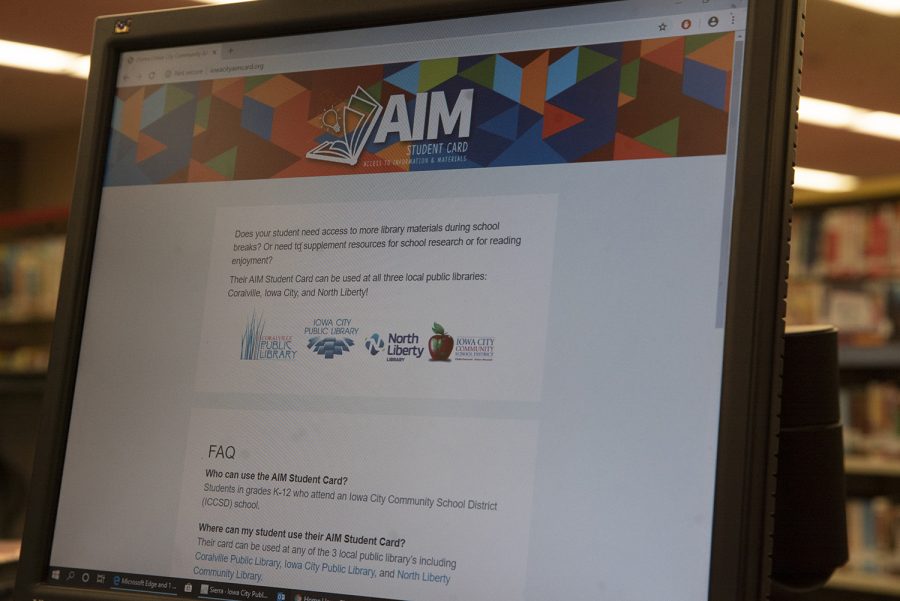 Photo Illustration by Tate Hildyard for The Daily Iowan.

A new library card will offer students in the Iowa City Community School District access to public libraries in Iowa City, Coralville, and North Liberty by using their student-identification number.

The card, titled “AIM,” will first be offered to students on Dec. 16 with a goal to increase student literacy.

“We want to be very forgiving with this card and just make sure that their experience with their school library in the library here are both positive ones,” she said.

Starting Monday, the card will begin its “test year” with a goal of focus solely on literacy, she said.

Pilkington and Iowa City Community School District Library Coordinator Kristi Harper created the “AIM” card as a result of attending a conference titled “Stronger Together” in Omaha, Nebraska, which focused on similar programs in other cities, Pilkington said.

In particular, Pilkington said that hearing from the Los Angeles Public Library System — which provides cards to around 678,000 students — made her excited to implement a similar program in the Iowa City area. Once she heard how many students the Los Angeles Public Library System had issued, she said that she knew Iowa City could offer similar benefits to the 15,000 kids local to the area.

“We want to be the students place to go when they don’t have access to their school,” she said.

Coralville Public Library Youth Services Director Sarah Glenn said that she is most excited about the access that these cards give to students who aren’t already using the library. She said that it is important that this program is reaching students across the Johnson County area.

“Iowa City spans the three public library service areas, so it just made sense for all of us to participate for the students because we would hate to exclude anyone,” she said.

Erin Silva, youth services manager for North Liberty Community Library, said she and Pilkington have collaborated on projects in the past, so when she heard about the “AIM” card, she was thrilled.

She said that the idea of any student in the Iowa City School District being able to check out books — either for school or personal enjoyment — made excited her.

Additionally, Silva said that North Liberty Community Library was lucky to have access to Iowa City Public Library’s resources. Giving students access to these resources no matter where they live was a really important aspect of this card, she said.

“It’s funny how many patrons think their Iowa City Library card works at Coralville and North Liberty anyway,” Silva said. “So it makes sense to have the student access cards so students can come in without any barriers.”

The costs associated with the program are primarily centered around staff time, promotional materials, and the expected cost of lost materials, Pilkington said. However, those involved value the increased literacy more than these expenses, she said.

“I know it will succeed when students are coming in using it and they have that supplemental access to literacy,” Pilkington said.