The Johnson County Board of Supervisors passed the second consideration of the revised Unified Development Ordinance in a 3-2 vote, but received backlash from attendees for not scheduling a public hearing. 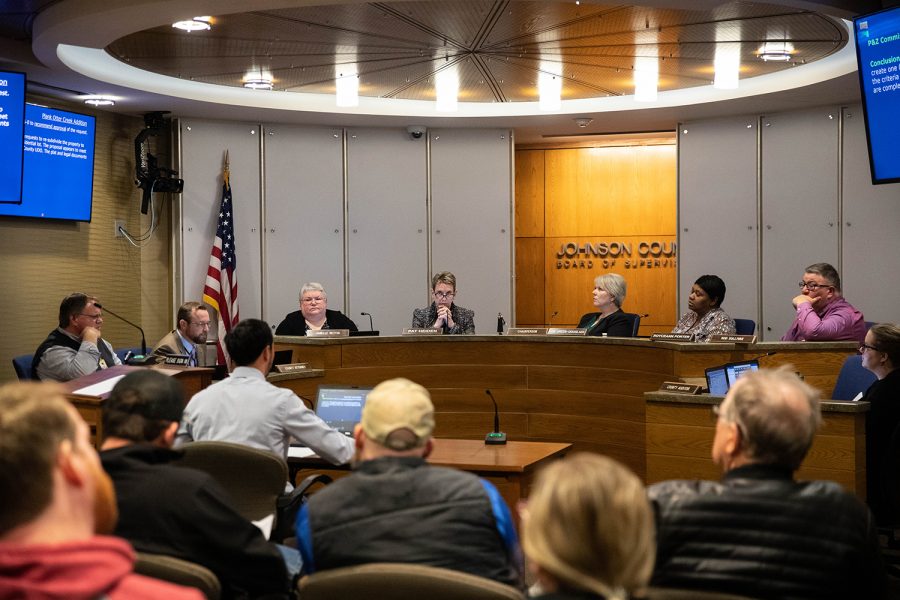 Johnson County Board of Supervisors vote on the second reading of the Unified Development Ordinance at the Johnson County Treasurer office on Thursday December 12, 2019.

Local farmers gathered in the hallway of the Johnson County Public Administration Building Thursday night to share frustrations after the county Board of Supervisors adjourned its meeting without a public-comment session following its second consideration of an ordinance that tightens agriculture land-use regulations.

The Johnson County Board of Supervisors voted 3-2 Thursday to pass the second consideration of the revised Unified Development Ordinence, which would regulate animal confinement on farmland and what land can qualify for exemptions from building and zoning regulations.

Johnson County Supervisor Chairperson Lisa Green-Douglass said that, because a time for public comment was not on the agenda, the board could not legally have a public hearing about the ordinance with the attendees.

A main point of contention in the Unified Development Ordinance is a revision that would require an application process for agriculture exemptions from county building and zoning regulations. The ordinance also regulates renewable-energy production, floodplain development, and soil and water conservation.

Dave Houston, a cattle farmer in Swisher, stood up after the meeting adjourned and directly addressed the board, saying he and other attendees came to the meeting specifically to talk about the ordinance.

“I understand there’s also quite a few people here who would like to ask the board why they’re voting that way, why you’re ruling that way … We’re being affected by it,” Houston said to the supervisors.

While Houston aired his grievances about the regulations in the new ordinance, several supervisors left the room before the informal meeting. Houston was particularly concerned with the provision that would regulate the amount of animals he can keep per acre.

“…The man was trying to engage us — we were adjourned — and to get us to engage with him and get everybody to engage, it was basically a mob situation and clearly out of line with Iowa’s code on open-meeting laws,” Green-Douglass said.

Operations less than 40 acres are presumed in the ordinance to not be “primarily adapted for agricultural purposes.” To receive the exemption, a person must be able to demonstrate a combination of a history and education in agriculture and has intent to continue significant and ongoing agriculture operations on the property.

Farmers and community members have criticized the ordinance as discriminating against small farms and limiting concentrated animal-feeding operations.

Bob Sentman said he’s been farming in Johnson County since 1956 and is frustrated with the regulations set forward in the ordinance — specifically with hog confinement and the requirement to submit an application in order to build new structures on an agricultural property.

“Do you think we got a voice now?” Sentman said, referring to the board not scheduling time for a public hearing. “We can’t even come in as a group and have a voice. This proves it right here.”

Sentman, along with other disgruntled attendees, said the regulations in the ordinance the board is voting to pass violates Iowa Code.

Green-Douglass said there are precedent cases that say you cannot define a farm based on size, so the ordinance defines a farm based on primary usage. She said in order to apply for agriculture exemptions right now, a farm needs to be over 40 acres, which she said is out of compliance with Iowa Supreme Court precedent.

“That provision for new folks coming in this new definition of a farm, it’s just a provision to make sure they’re actually going to be farming and not taking farmland out of production and yet still getting ag exemptions,” Green-Douglass said.

The Johnson County Department of Planning, Development, and Sustainability defines agriculture exemption as “land, houses, barns, outbuildings, or other buildings or structures which are primarily adapted and used for agricultural purposes are exempt from county building and zoning regulations, like setbacks from property lines and building codes.”

The revised ordinance does not include the requirement for a public hearing with the supervisors if the farm included a feeding operation with a density of “25 animal units per acre of livestock rearing area” or more on an operation under 40 acres. Green-Douglass was one of the three supervisors who voted against the revised ordinance, telling the DI on Dec. 6 that there should be a public hearing for environmental reasons.

The board passed the first consideration of the ordinance with a 3-2 vote on Dec. 6.