Seven groups of dancers in the UI Department of Dance showcased their workings from the 2019 fall semester. 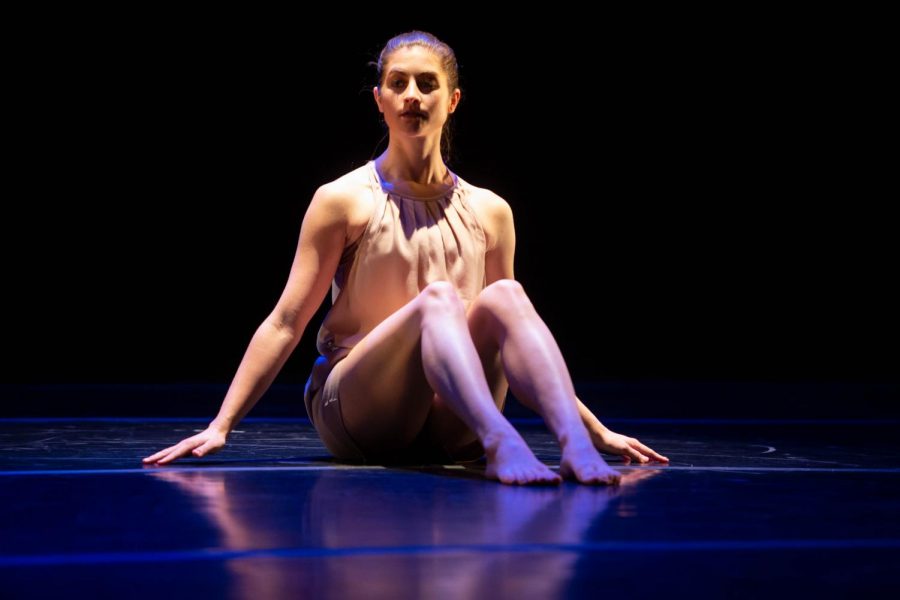 A dancer runs through her routine during a dress rehersal for the Graduate/Undergraduate Dance Concert at Space Place Theater in North Hall on Tuesday, Deec. 10, 2019. The event featured multiple performances from dance students at the University of Iowa. (Emily Wangen/The Daily Iowan

Through the icy air and snow riddled ground, audience members trudged to the warmth of Space Place Theater. The room buzzed with excitement while awaiting the curtains to slide away and reveal the first day of performances by this years Graduate/Undergraduate Concert.

Starting and ending the seven dance performances of the night were pieces taken from the International Writing Program and University of Iowa dance collaboration from earlier in the semester. While all of the dances were built with different inspirations, silence seemed to bring these pieces together.

The room darkened, becoming pitch black, and for a few moments, only the hollow, metallic sound of the curtain sliding away could be heard, revealing a poetry-backed dance titled “Eternal Somewhere Else.”

The lights revealed two dancers already situated on stage. One was on top of a turning table with a long piece of fabric swirling around her legs. The other dancer crouched near her feet, guiding the fabric around her legs.

Performer Kate Vineek said the dancers had asked themselves what it was like to be from another time, to be an ancient tree or planet.

The otherworldly music and echoing of the poetry lines and silence eventually gave way to the building pulse of the “Is This Mine?” performance.

The four dancers on stage stretched their arms out, creating blossoming images through the show. Mimicking each other and fighting against one other, the dancers split themselves back and forth into their whole group of four and two groups of two.

Silence spread across the room as their piece finished, with each dancer completing the piece with a spotlight upon them. The dancers reflected in the cool blackness of the floor before running offstage.

“What We Take With Us” featured two dancers, Jessica Betani and Marcus Pei, dressed in similarly styled black outfits. They danced much more as a couple compared to the other performances of the night, playing on typical forms of who led when dancing.

Stepping out onto the stage, a dancer covered by a white bag took her place in the center for “the One Side Conversation.” Over the sound system the word “actually” rang out, and the dancer began to move her arms within the bag, struggling to break free. “What I meant was” came next with arms bursting through.

The dancer’s head broke free soon, coming up to the front of the stage with the sounds of a busy crowd of people behind her and repeating the phrases said over the speaker, punctuating them with a yell.

A techno beat rang out through the theater as two dancers ushered in “scribbles in the dark.” Their red shirts reflecting vibrantly against the black of the floor as white light poured on their hand movements and later their use of the floor.

The piece “Recovering Pause” saw silence as its friend, using more silence than most of the performances that night. The performance brought the audience ready for the closer of the night, “Measuring The Depth.”

Their dance was framed by the haunting words of the IWP poet from Lithuania Tautvyda Marcinkevičiūtė. The middle used upbeat music and stood as the only one of the performances to use break dancing as an element of the show.

While the couple in the piece had been dancing together throughout, the curtains closed on a scene of the woman holding the man’s legs for a second contemplating what to do before dropping him and running off stage.