The Hawkeyes have not won a regular-season game in Ames since 2001 but will have the opportunity to do so Thursday night. 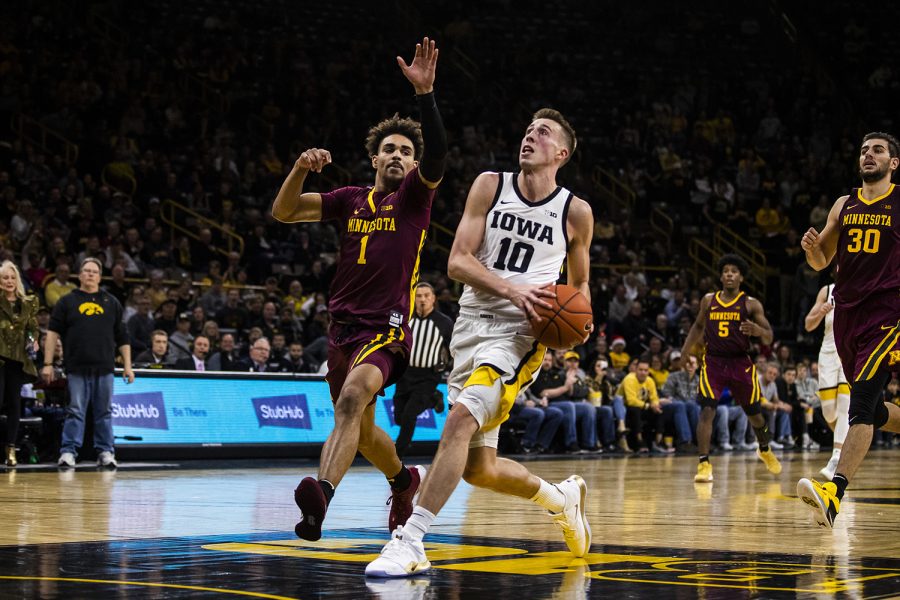 Iowa guard Joe Wieskamp drives the ball during the men's basketball game against Minnesota at Carver-Hawkeye Arena on Monday, December 9, 2019. The Hawkeyes defeated the Gophers 72-52. Wieskamp scored 8 of his 15 attempted shots.

The Hawkeyes defeated their in-state rival last year, 98-84, in Carver-Hawkeye Arena, and after the final seconds ticked off the clock, words continued to be exchanged between the two teams.

A scuffle ensued. Both coaching staffs did their best to pull players out of the heat of the action and direct them toward the tunnel.

“You expect with a rivalry game that there’s going to be a certain level of intensity,” Iowa head coach Fran McCaffery said. “We all expect it — coaches, players, fans. You just have to keep your composure.”

The Cyclones sit at 6-3 on the season with a notable win over No. 16 Seton Hall in their last game.

Sophomore guard Tyrese Haliburton has been the biggest weapon for Iowa State this year. The Oshkosh, Wisconsin, native leads the Cyclones with 16.2 points and 8.2 assists per game this season.

“He’s a guy who could be a triple-double guy,” McCaffery said. “So, you got to contain him, you’ve got to get up in his face. You’ve got to take some of his vision away if possible. He sees the floor as well as anyone I’ve coached against in a long time. He’s finding guys consistently. He’s also a guy that if you overextend [on his passing], he’s going to score. Those guys are the toughest to guard.”

This year’s Cy-Hawk showdown is in Cyclone territory.

Iowa travels to Ames to take on the Cyclones, a place the Hawkeyes have struggled of late. The Hawkeyes own an eight-game losing streak at Hilton Coliseum, having not won a regular-season game at the venue since 2001.

Iowa’s schedule has been a whirlwind as of late.

Including their game against the Cyclones, the Hawkeyes have played six games in a two-week span. Only one of those came at home.

After its game Thursday, Iowa does not play again until Dec. 21 against Cincinnati in Chicago. The Hawkeyes are then off until Dec. 29 when they play Kennesaw State and will not resume Big Ten play until Jan. 4 against Penn State.

“We’re always going to take a significant time around finals week — I think that’s important,” McCaffery said. “And after that, you’re typically getting ready for conference play again.

“In the short run, we’re a little banged up; we need a little time off, health-wise, but more importantly, for finals. Would I want to play more often? Probably. But I’m glad we have a game before Christmas and a game after Christmas before getting back into league play.”

Iowa forward Joe Wieskamp is known for his ability to make a shot from any spot on the floor.

The area of Wieskamp’s game that has gone underrated this season is his defense. The sophomore forward showed again on Monday against Minnesota that he is more than just a scorer.

“He’s been really good [defensively] all year,” McCaffery said. “The other night [against Minnesota] it was spectacular. Pretty much everyone we’re going to play, he’s going to be matched up on someone who’s pretty good.