The Holden Comprehensive Cancer Center has welcomed the addition of the MR-linac to treat patients in a more efficient way. This center is only one of three in the nation and has worked on the most patients in the world. 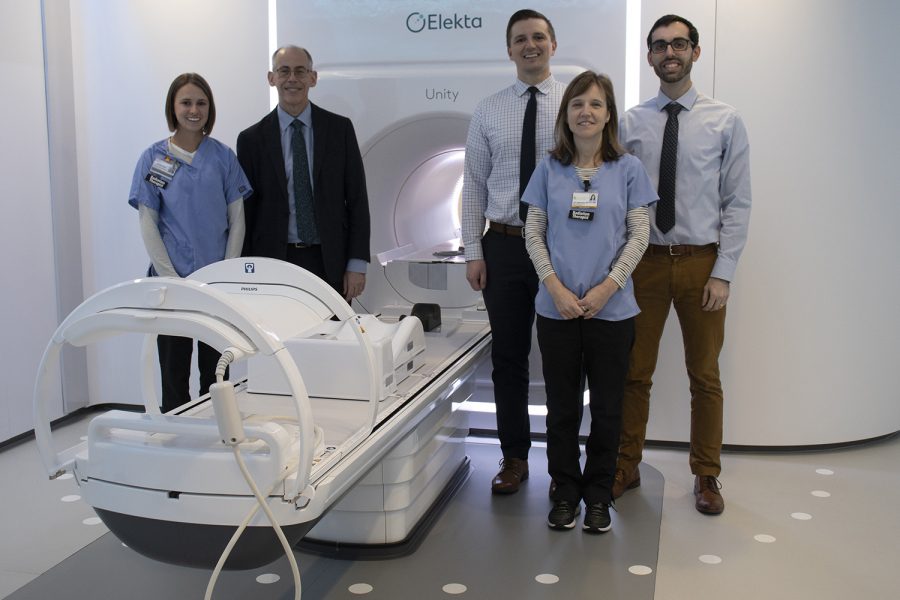 Radiation Oncology, Department Chair, John Buatti, MD and his team stand next to University of Iowa Hospital and Clinics’ MR-linac machine on Tuesday, December 10, 2019. This new technology can both treat patients and act as an MRI scan, by focalizing on one spot and sending waves specifically there. (Hannah Kinson/The Daily Iowan)

The University of Iowa Carver College of Medicine is one of the first centers in the nation to add MR-linac to its technology, helping to more precisely treat tumors.

The UI Radiation Oncology Department has adapted this new technology to treat patients with tumors more accurately, efficiently, and with the least amount of toxicity.

Radiation Oncology Department Chair John Buatti said the MR-linac is not the same as an MRI. With an MRI, one can only visualize, but the MR-linac can visualize a tumor and treat it instantly.

“The MR-linac aims radiation beams in multiple angles to be more exact and concentrated in a specific location,” Buatti said. “Don’t think of it as an MRI, because this new technology does what an MRI can do, while treating the patient and advancing the treatment time.”

Buatti said that the UI Holden Comprehensive Cancer Center is the third medical-research center in the nation to implement the MR-linac and has since treated the most patients out of all the available centers in the world.

“We treated our first patient this summer and have since been seeing around 10 at a time. The patients come in daily or every other day and get a 30- to 45-minute treatment session and have been typically done with treatments after one to six weeks,” UI MR-linac technical director Daniel Hyer said.

Construction on the new technology began in 2017 with miles of cables behind the white walls. At this time, software glitches and installation hiccups were smoothed out to work out bugs, Buatti said.

The MR-linac works by running radiation beams at the speed of light to the precise location of the tumor, Buatti said.

Joel St-Aubin, clinical associate professor in the Department of Radiation Oncology, said that this specific technology implemented at the Holden center was FDA approved in 2018, but he and others had been working on systems that led up to its creation since 2005.

A traditional MRI works by magnetizing the body through its hydrogen atoms and perturbing these atoms in order for a signal to be sent from the body to the magnetic field in the MRI. This can sometimes be a timely process by having to get many different scans from not only an MRI, St-Aubin said, but the MR-linac cuts down all of that time.

Hyer said the technology can personalize treatment and shows constant visibility of changes occurring internally in the patient through magnetic resonance imaging and linear acceleration.

“With showing the tumor in real time, the linac can adapt what it sees to the treatment of the patient,” Hyer said. “For example, tumors in the stomach can move, so we can see that, or if someone had a large lunch, we know not to worry about differences.”