Exploring the legacy of Bushnell’s Turtle, a beloved Iowa City restaurant that pays homage to the first combat submarine

After hearing of a popular restaurant named after my ancestor’s invention, a DI Arts Reporter went out to learn more about Bushnell’s Turtle and its founder Ed Zastrow. 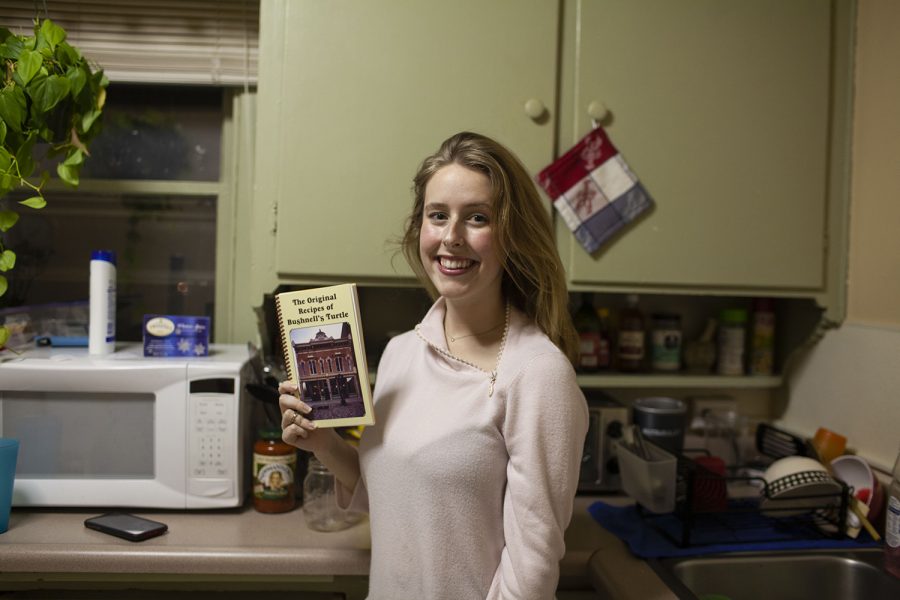 Daily Iowan arts reporter Addie Bushnell poses with a copy of The Original Recipes of Bushnell’s Turtle in her apartment on Dec. 10, 2019.

My dad’s side of the family, the Bushnell’s, were certainly fond of family stories. I grew up hearing all about the adventures of my aunts, uncles, grandparents, and even great grandparents. Perhaps the most exciting of these stories was that of David Bushnell, a Revolutionary War-era ancestor, who had invented one of the first submarines.

David Bushnell is credited for inventing the “Turtle,” credited as the first submarine used in combat.

Despite the importance and objective coolness of his invention, most people aren’t aware of the Turtle or the remarkable impact it had in the scientific community. When I first moved to Iowa City as a freshman, I was incredibly surprised when someone asked me, “Oh, your last name is Bushnell? Have you heard of Bushnell’s Turtle?”

They weren’t talking about my ancestor’s invention, though. They were talking about a popular and loved Iowa City deli that was in business from 1976 to 1994.

Bushnell’s Turtle was founded by Ed Zastrow, who worked in the restaurant alongside his then wife, Sherri. The restaurant was often described as a submarine sandwich shop, which was the inspiration behind the name of the deli.

According to Iowa City native Kara Logsden, Bushnell’s Turtle was often overflowing with customers. Many locals described the restaurant as a welcoming place with a unique personality.

“There were always things to look at,” said Logsden. “I remember beautiful stained-glass windows. There would always be people we knew there, so it was a very social place. It was always a really happy time, and the food was so good.”

Zastrow died last July, but he left behind a remarkable legacy of generosity and community service.

Logsden, who met Zastrow during the time that he worked for the Ronald McDonald House, described the Zastrows as people who cared deeply for Iowa City.

Maeve Clark, who worked with Ed on the board of the Iowa City Public Library, spoke highly of the kindness that Ed shared with his friends and colleagues.

“He was an incredibly generous man,” she said. “I once ran into Ed downtown after Bushnell’s Turtle had closed, and told him how much I missed his mint chocolate brownies. He made a batch at home and brought them to me at the library.”

Although the Iowa City community lost Zastrow, the spirit of his contributions has been kept alive through *The Original Recipes of Bushnell’s Turtle,* a cookbook put together by the Zastrows, and originally published in 2008. According to the book, it has since sold over 12,000 copies.

“Everything on the menu of Bushnell’s Turtle was made from scratch,” Zastrow writes in the introduction of the cookbook. “‘Heart-healthy’ does not apply to many of these recipes.”

The cookbook serves to satisfy Iowa City locals who miss the friendly atmosphere and delicious food at Bushnell’s Turtle.

I was surprised and moved by all of the wonderful memories of Bushnell’s Turtle and Zastrow. In the spirit of honoring the legacies of both Zastrow and my ancestor, David Bushnell, I will be making and reviewing three recipes from the cookbook. I can’t wait to get a taste of what made Bushnell’s Turtle so popular, so welcoming, and so loved.