Editorial: Climate action must be substantial, not nominal at University of Iowa

UI President Bruce Harreld is right to say a climate-crisis declaration means nothing without action. Now, the UI must follow through. 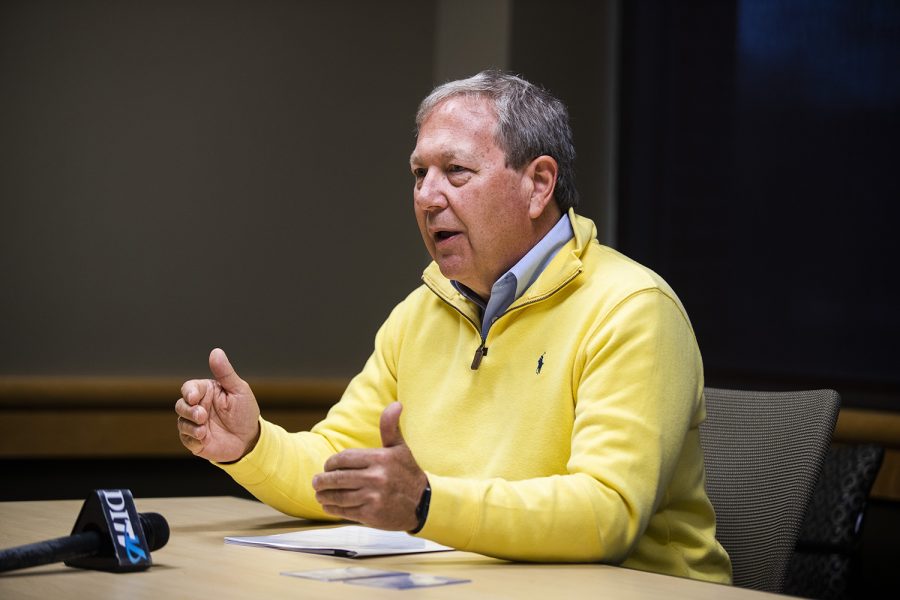 UI President Bruce Harreld answers questions during an interview with The Daily Iowan in the Adler Journalism Building on Monday, Dec. 9, 2019.

After months of relative silence on climate change, the University of Iowa is finally moving in the right direction.

UI President Bruce Harreld declared a climate crisis Monday during an interview with The Daily Iowan, noting that simply acknowledging the environmental reality is not enough. He challenged the community to think about what steps come next.

“Of course we’ve got a climate crisis,” Harreld said. “So we’ve got to think about what the impact is on this campus, and what we will stop doing that we’re currently doing, what we need to start doing that we’ve never done.”

The most immediate issue in the UI’s climate focus is what to do with the UI Power Plant. Local groups such as the Iowa City climate strikers have demanded the immediate end of coal burning at the plant.

UI Senior Vice President for Finance and Operations Rod Lehnertz, Harreld, and other experts have said that cannot be accomplished immediately. Without alternative fuels instantly available, there would be no way to heat the residence halls, hospital, and classrooms this winter.

However, the UI remains committed to the goal of ending coal burning at the plant by 2025 — possibly by 2023, depending on the handling of the public/private partnership approved Tuesday.

The bottom line is that the UI is getting off coal soon. The university is also using biomass as its long-term replacement but must first transition using natural gas, another climate-change-worsening fossil fuel. This fuel-replacement decision is critical and, if implemented properly, is consistent with Harreld’s climate-crisis declaration.

If the UI is serious about the climate crisis, it will do everything in its power to move to 100 percent renewable energy as fast as conceivably possible.

As for the public/private partnership itself, it also must be executed in a manner congruent with the climate crisis. Activists’ hesitation to embrace private entities is not unwarranted, as market interests in the energy sector hold massive responsibility for the severity of climate change.

The firms must put people before profits. They must not revert acknowledgement of the climate crisis, only to take menial steps to address it. The partnership must prioritize sustainability, and French companies ENGIE and Meridiam have a track record that seems to place such aims at the forefront of their work.

This is true not just in the UI community, but throughout Iowa, the U.S., and the world: climate change requires climate action.

The DI Editorial Board commends Harreld’s declaration and the shared-governance branches’ recognition of climate emergencies. However, as Harreld himself knows, what truly matters is “what’s next.” The UI’s success depends on whether the institution will take steps that match the magnitude of the climate crisis. The board hopes the UI will follow through on its responsibility to build a sustainable future for its community.