After initially passing and then facing a quick veto, the University of Iowa Student Government will officially be enacted in the spring 2020 elections. 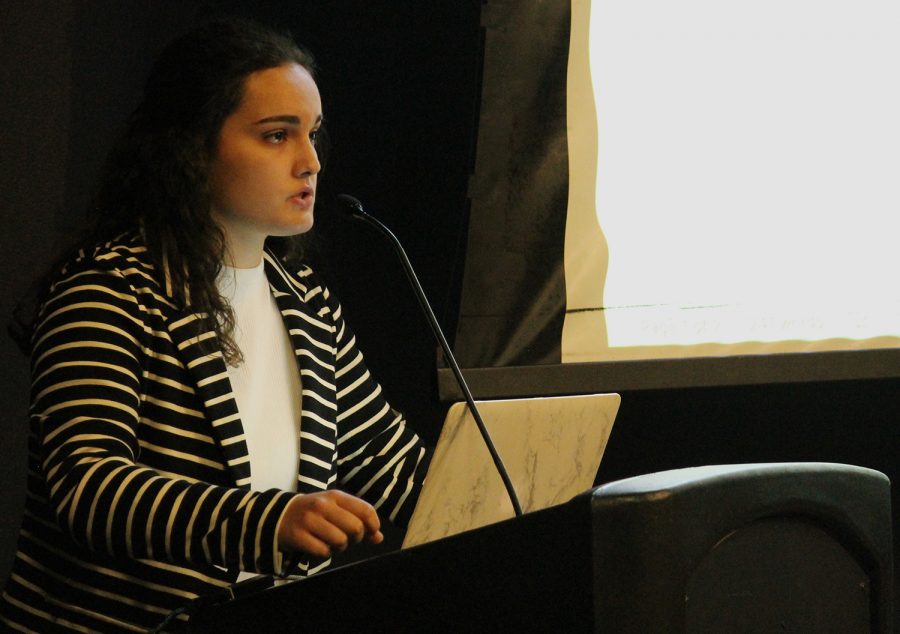 Senator and Internal Affairs Committee Chair Anna Correa talks about the legislation to fellow senators during a UISG meeting Tuesday. The senators voted to override a veto from President Noel Mills.

The legislation to adapt the code and eradicate a joint ticket option, where senators and executive board members run together, was originally presented and voted for on Dec. 3.

As previously reported by The Daily Iowan, the two pieces of legislation that passed focused on clarifying and updating the guidelines of the UISG election ticket. The second proposal, which Mills vetoed, aimed to remove a joint-ticket option and stipulated all election code changes would need to be made by early fall, rather than at any time.

The bill Mills vetoed originally passed by 70.8 percent. On Tuesday, almost three-fourths of the senators voted to override the veto.

At-large Sen. Teagan Roeder, an at-large senator, and UISG Internal Affairs Committee Chair Anna Correa both authored the initial legislation and initiated the overriding the veto after penning their own long responses to Mills’ veto. They both spoke in support of the override to improve the accessibility of UISG seats.

At the Dec. 3 meeting, Roeder said that his intent with this legislation was to remove the elitism found in the organization’s election and grow the accessibility of student government.

“[Mill’s] letter to veto this legislation is endorsing the selection of senators by executives,” Roeder said at the Tuesday meeting. “Before you can be elected, you first must be selected and in the system. The problematic nature of this statement is that senators are not supposed to serve at the will of executives or anyone else but the students of the University of Iowa. We must be elected on our own accord.”

Roeder said a vote to override was a vote to prevent barriers from students accessing UISG and open the doors for a more diverse representation of the student body.

One of the main concerns arguing against the override was the lack of time individuals had to react to these election code changes. This was because senators were concerned about tickets that had already been forming — a concern UISG Parliamentarian Jacob Heid was quick to dismiss.

“This piece of legislation may not be perfect, but it is a way to help students feel more empowered to run on their own terms instead of waiting for a ticket to reach out to them,” he said. “We have to change this system some time. No matter when we change it, the people who are planning on running or are interested in being a part of the election are going to be inconvenienced. Change is scary. Change is hard. But these changes are going to make the election more accessible.”

Adeline Barron, UISG’s black constituency senator, voted for the override alongside Heid Tuesday and voiced her concerns about leaving an elitist system in place.

Correa used her time to point out the importance of passing the legislation when it comes to how the executive branch works with the legislative branch.

“We get rid of the problem of executive overreach [with this legislation],” she said. “That’s one of our biggest issues [in UISG]. Voting is already separate. When you vote, you vote for executives and then whatever senators you want. Since voting is separate, it makes sense that tickets would be too.”

After the override was confirmed, Correa encouraged students to consider running in an email to the DI.

“I encourage every student on the [UI] campus — whether they’ve thought about running for UISG before, they’ve never heard of UISG, or anywhere in between — to consider running in this coming election cycle,” she said.