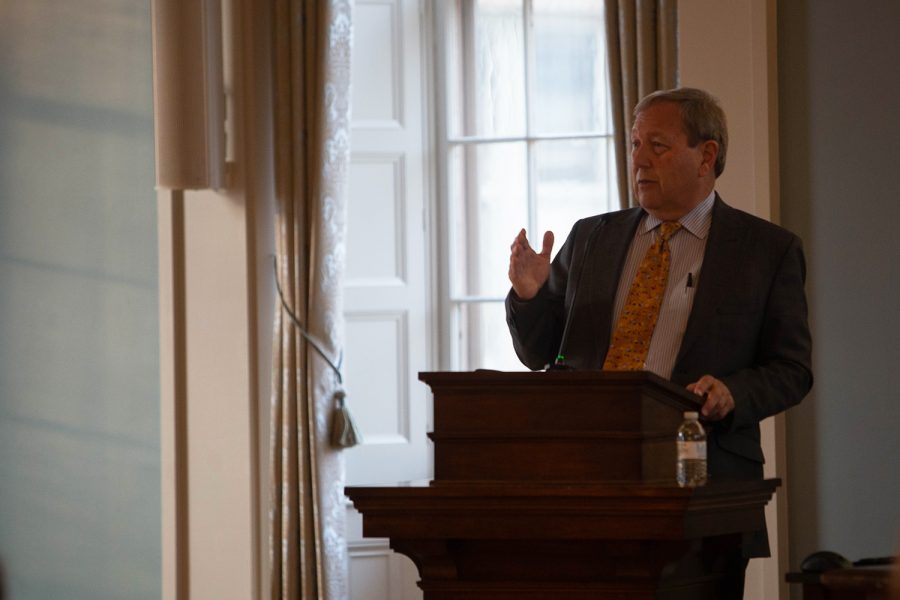 University of Iowa President Bruce Harreld addresses the Faculty Senate during a meeting in the Old Capitol Senate Chambers on Tuesday, Dec. 10, 2019. Harreld talked about the approval of the public/private partnership.

As some members of the public and Democratic lawmakers have raised concerns that the General Assembly will defund the University of Iowa for its pursuit of a public/private partnership, UI President Bruce Harreld told the Faculty Senate Tuesday that the power of the polls got him over that concern.

“I want to remind you that everyone in this room is a voter,” Harreld said during the Tuesday Faculty Senate meeting in the Old Capitol Senate Chambers. “And I think it’s about time we stand up and start asking people who are running for office, ‘What’s your point of view on public higher education, and are you willing to fund it?’ ”

His remarks — met with applause from those in attendance — came as part of a response to questions from Faculty Senate member Loren Glass regarding how the UI will allocate funding from the university’s public/private partnership for its utility system.

Glass also asked how state lawmakers, who are already notorious for trimming the regent universities’ budgets in recent years, would respond to the approximately $1 billion endowment the UI would manage in proceeds.

“The last few times you guys came here and mentioned this to us, you were asked whether the state was going to deappropriate relative to what we were getting, and there was no satisfactory answer,” Glass said.

He also asked Harreld about whether this deal could fund faculty lines and said he understood the answer to be no. Glass said it seems that if the university gets less from the state, there will be plenty of money to use, but it will not go toward hiring faculty.

Harreld responded that the money from the partnership will go toward enhancing the strategic plan in any way, he said, including supporting faculty. A public/private partnership grant could very well fund faculty lines, Harreld said, should the budget review board and shared-governance leaders decide to allocate the money that way.

The partnership is an important and historical moment for the UI, Harreld said, as a lack of state funding has affected all public institutions. He said this is reflected in rankings as private universities continue to rise in those standings.

During the meeting, Harreld said the state Board of Regents has educated the current members of the state Legislature to ensure they understand the partnership is not a reason to decrease appropriations; they still need to fulfill their part of the funding deal.

Harreld also said the members of the General Assembly, the governor, and the regents cannot bind themselves to funding amounts for more than one year. This makes it hard for an institution with a long-term strategic plan like the UI to be caught in that funding mechanism, he said.

“As activists … and as good as we are at that, why don’t we activate ourselves and at least take some influence, not just in Johnson County but across this whole state, maybe nationally, because this is a real crisis,” Harreld said.

During a legislative forum held by The Daily Iowan Sunday, state lawmakers who represent Johnson County expressed their concerns over the UI’s public/private partnership in regards to the uncertain factors it relies on and how it might affect state appropriations.

Iowa Sen. Zach Wahls, D-Coralville, said the $15 million the UI will distribute annually in proceeds from the partnership endowment may cause GOP lawmakers to decide that money will be $15 million less to allocate. Because it is a 50-year deal, he said it does not matter if the legislators support it now; it matters if those elected in the future support it, too.

“So, clearly the right thing to do here is to not prioritize the Power Plant and instead for the Legislature to do its job, which is to fund our institutions of higher education in the state, and we are not doing that,” Wahls said.