The deal with ENGIE/Meridiam will result in a $1.1 billion upfront lump sum to the UI, which is anticipated to grow to around $3 billion over 50 years. 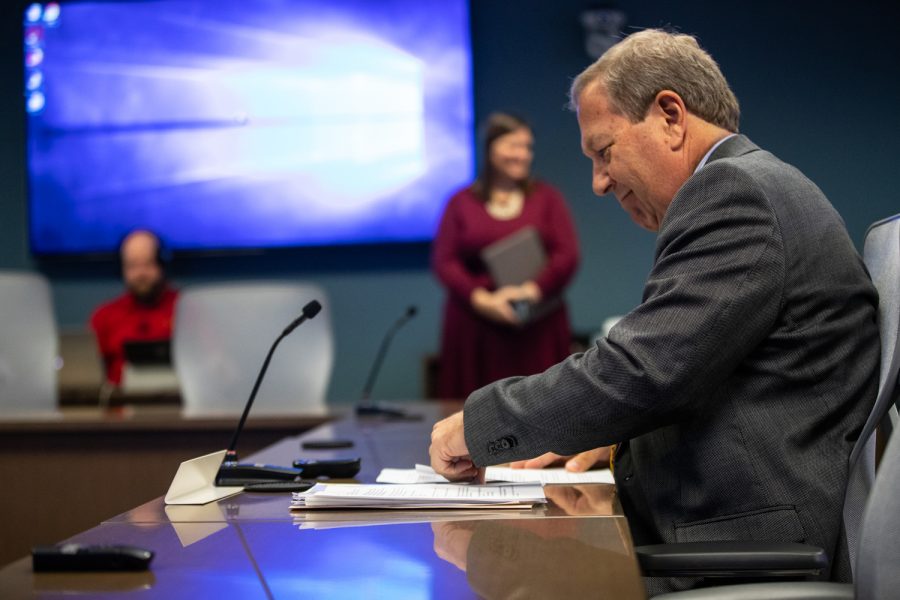 University of Iowa President Bruce Harreld prepares to speak to the state Board of Regents at a meeting in Urbandale on Tuesday, December 10, 2019. The regents voted unanimously to pass the public/private partnership.

URBANDALE — When University of Iowa President Bruce Harreld visited the headquarters of French energy conglomerate ENGIE in September, the environment he saw impressed him.

Several floors below where his meeting took place, Ohio State University students worked on their energy and sustainability internships — a benefit of the institution’s partnership with ENGIE to manage its energy infrastructure. The firm’s employees fostered a collaborative workplace spirit. The company seemed to exhibit the set of values that would make a good 50-year partner in operating the campus utility system with expertise, he told The Daily Iowan.

After leaving that meeting, he said UI officials thought it would be a shame for ENGIE not to be the winning bidder for the university’s utility system public/private partnership. The company was responsive, boasted an educational space to support student learning, and demonstrated a commitment to leading the world through a transition to relying on more sustainable energy sources.

The UI wished for a good partner, and Harreld said it received one. The state Board of Regents on Tuesday approved the UI’s proposal to partner with ENGIE and Paris-based investment firm Meridiam to operate and maintain its utility system, which will result in an upfront lump sum payment to the UI of $1.165 billion to manage over 50 years in a new endowment fund.

UI officials have billed the 50-year agreement as opening an alternative revenue source to help fund strategic priorities, aiming to boost outcomes for students such as graduation and retention rates. Administrators also hope the resources could reverse a slide in the often-touted U.S. News rankings — understood in higher education to be an indicator of an institution’s quality.

“I think it’s the truth — we’re on a glide path to mediocrity,” Harreld told the DI on Monday. His remarks were embargoed pending the regents’ approval at the Tuesday meeting. “And I think this institution has got much more potential and it owes much more to its students than that.”

Seeking solutions, the UI turned to the exploration of a public/private partnership to establish a mechanism that could help support programs and services to strengthen student success.

That pursuit came at the direction of Gov. Kim Reynolds after she wrote to Regent President Mike Richards Aug. 17, 2018 and asked the institutions’ leaders to consider such agreements.

“We need to create predictability for Iowa families,” Reynolds wrote. “And we need to keep the cost of higher education at a level that is affordable for those same families while also making sure our universities continue to be world class.”

“I encourage you and your colleagues on the Board of Regents to survey what other universities around the nation are doing to leverage their assets — tangible and intangible — to further invest in higher education,” Reynolds wrote.

She never mentioned the concept of a public/private partnership by name in the letter, but she suggested the possibility of exploring new uses of “an underutilized physical asset.”

With Richards’ vow in a written response Aug. 29, 2018 to identify potential opportunities for exploration, the UI’s public/private partnership was set in motion. After six public forums, meetings with the four shared-governance branches, multiple visits with firms around the world and the U.S., and dozens of conversations with the regents, the deal came to the governing board for consideration at the regents’ office Tuesday.

In attendance at the meeting, Reynolds said she thinks the occasion will be a “historic day for higher education in Iowa” amid a changing global and national higher-education landscape.

“Advances in technology and communication have dramatically increased opportunities for students as well as colleges and universities,” Reynolds said. “Competition for both students and faculty has never been more intense. As our higher-education institutions are facing more pressures to control cost and tuition than ever before, all of that is happening at the same time that taxpayers, legislators, and yes — governors — continue to expect highly ranked, top flagship public universities.”

Meanwhile, critics fear the deal will leave the institution vulnerable to unforeseen financial downturns and have criticized the process as lacking transparency.

The winning bidder and the sum of the proceeds from the deal were not shared until Tuesday, but UI administrators have disputed that perception, maintaining the process was legal and ensured a competitive bidding process. They also point to the public forums hosted on campus as evidence of providing public-engagement opportunities in the process.

Now that the regents have rubber-stamped the agreement, the Hawkeye Energy Collaborative — the concessionaire formed with ENGIE and Meridiam to ultimately partner with the UI to manage campus utility assets — has been formed.

After financial close within around 90 days following Tuesday’s commercial close, the UI will take the lump sum exceeding $1 billion and use around $166 million to pay consulting fees and its outstanding utility-system bond debt. The newly created nonprofit will invest the roughly $999 million in net proceeds and determine allocations from the “P3 utility endowment.”

A nonprofit board composed of one regent, one Faculty Senate appointee, and the UI senior vice president for Finance and Operations would meet quarterly to review the fund’s operation, hire investment advisers and managers, and determine the yearly allocations to campus. Shared-governance leaders and a budget review board will collaborate to determine how to share the proceeds from the deal.

The UI has determined it needs to spend $33 million annually to fund its strategic plan, Harreld said, so officials plan to tap into the partnership endowment to use $15 million each year to support the institution’s goals. The funds will be distributed through one- to five-year grants, which he has said likely won’t involve building projects and facilities.

Harreld on Monday likened creating the agreement to drafting the U.S. Constitution. He said that, like the document which lays out the country’s governing set of principles and the law of the land, the agreement has mechanisms to grapple with an uncertain future.

“… We never know how it’s going to play out, but we tried to put in place — a little bit at times I was referring to it like writing the U.S. Constitution — which you have to create some values and principles you stand on and try to make those inviolate, and then try to add enough flexibility into it — a structure that can support those values but enough flexibility as the world evolves,” Harreld said.

Why ENGIE and Meridiam?

Before starting the process of exploring the public/private partnership, Harreld said he reached out to OSU President Michael Drake for his feedback, as someone who has pursued such an agreement before. He didn’t know it then, but their two respective institutions would team up with the same French firm to operate the systems that heat, cool, and distribute power to their campuses.

A global leader in energy services for higher-education institutions, cities, health-care providers, and other social-infrastructure entities, ENGIE has a verifiable commitment to sustainability, Harreld said, supports research and opportunities for students, and engages the community.

Richards said the partner aligns with UI values in many ways. ENGIE and Meridiam were explicit in the desire to retain university employees while avoiding any interview process, he said, adding that ENGIE has a verifiable track record of successfully transitioning employees, notably at OSU.

“I think Ohio State was a pioneer, and the University of Iowa is the second of its size,” Cangucu told reporters. “We count on the experience, we count on the knowledge base, and we count on all of them to come to ENGIE to help us to deliver the plan that we have for the partnership. We need the people, so we’re going to start tomorrow on the journey to bring the employees to change.”

Beyond competitive-employment offerings and other perks for employees, the partner will aim to make the UI coal-free by 2023 by increasing the use of biomass, not just substituting natural gas for coal, Richards said.

He added that the worldwide energy-sector leader has engaged 500,000 students over the last decade, and he said UI students will benefit from that commitment with 10 internship spots offered immediately for students to study in Belgium and France in addition to internships available to UI students on campus and throughout the U.S.

Meridiam, a global firm that manages more than $7 billion of project funding, brings to the table a specialization in the development, financing, and management of sustainable public/private partnerships, Harreld said. The firm works with entities that want to dramatically decarbonize their energy footprint, so Harreld told the DI that Meridiam became an interested partner in part because of the institution’s sustainability goals.

Is a proliferation of P3s on the horizon?

Strapped for funding, public higher-education institutions and other entities have increasingly turned to public/private partnerships to generate new revenue.

Harreld in a Dec. 3 informational presentation to the regents predicted a proliferation of such agreements in the U.S., particularly in the higher-education sector, as universities face dwindling enrollment and other challenges.

Other universities in addition to OSU have taken on similar deals in recent years to operate units such as campus parking, utilities, or housing — though not all have seen success.

A University of Oklahoma partnership has resulted in lawsuits, exposed the private firm that provided $250 million to fund the deal to financial risk, and caused harm to the institution’s and the state’s reputations.

After the school’s President David Boren retired and James Gallogly — who has since resigned — was at the helm, the Chronicle of Higher Education reported that the university’s Cross Village housing project lost steam and took a sharp downturn. Funded by private capital, Cross Village was slated to open in the fall of 2018, after which time Boren had already left the institution.

As the 2018-19 academic year approached, the university fell behind in its marketing and had drawn in few tenants for its apartments, the Chronicle reported. Bond-rating agency Standard & Poor’s soon downgraded the bonds for the project to signal to investors that the investment was a gamble — reflecting on the risks of doing business with the University of Oklahoma and the state.

Asked Monday what assurance he would provide to the public that the UI wouldn’t face similar legal or financial risks as a result of its own deal, Harreld said he can never guarantee the university will not face a lawsuit, but he noted the structure of its public/private partnership differs greatly from Oklahoma’s.

“It’s not hoping that we’ll be able to use the output of the steam coming off our utility facility,” he said. “We do that–we’ve been doing it for quite a while. For decades. So this is not like we’re building something on another corner of our campus and hoping students will move into it.”

The greater question, Harreld said, is how the UI will “unlock” the financial value that has been built up in that infrastructure to support the strategic plan.

During her remarks before the regents gave the green light to the deal, Iowa’s governor said the UI’s “bold strategic plan” will now be supported with supplementary revenue from the public/private partnership.

After a few firm handshakes and pats on the back for a deal soon coming to a close — more than a year after Reynolds asked the universities to launch into a new phase of exploration — she lauded the agreement as a blueprint for public entities to use with similar pursuits.

“This public/private partnership is exactly the kind of innovative thinking that we need, not only in Iowa’s public universities but across state government,” she said. “It really is my hope that what we are discussing today and this P3 model can be a roadmap for similar ventures in the future.”