In a meeting at the state Board of Regents’ office in Urbandale Tuesday, the UI received approval for its public/private partnership to benefit off its utility system — despite public concern about a lack of transparency in the decision-making process. 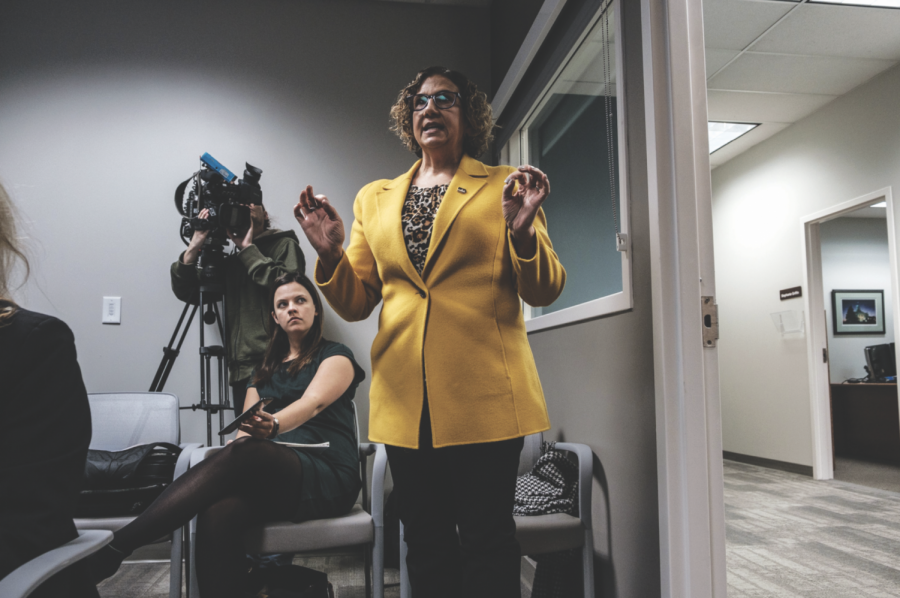 URBANDALE — State Sen. Claire Celsi, D-West Des Moines, donning a bright gold blazer, rose from her seat at the state Board of Regents’ office Tuesday morning to decry what she said was a lack of transparency in the University of Iowa’s public/private partnership.

“There has been no public comment in this meeting, and that’s shameful,” the lawmaker, a member of the Government Oversight Committee, said before the governing board approved the deal. “The people of Iowa deserve to have a say on this or at least to learn more information about it.”

She wanted the regents to hear her thoughts before they took a vote to OK the agreement.

“I understand that you guys have all the information that you need to make this decision,” she said. “This is a state of Iowa asset, not your monopoly board. So not letting the public outside of the University of Iowa itself have any input is unconscionable.”

Once she said her piece, Regent President Mike Richards swiftly proceeded with the vote: “There’s been a motion, and it has been seconded. Is there any discussion?”

Nine yes votes ensued, and Richards announced “the motion has been approved.” The regents unanimously approved the $1.1 billion deal to work with a private partner to manage the UI Utility System.

Celsi blended in with the officials who came to celebrate the deal’s approval in choice of apparel, but her remarks stood in stark contrast to comments from Gov. Kim Reynolds, the regents, and UI officials regarding the transparency involved in pursuing this agreement.

UI President Bruce Harreld and the regents stressed in the meeting that informing and involving the public in the partnership process has been and remains a priority.

Shared-governance branches at the UI and the broader UI and Iowa City communities have already voiced their concerns through a number of open forums and private meetings with those key stakeholders, Harreld said.

Since the UI began its exploration of a public/private partnership in February, Harreld said there have been six town-hall meetings open to the public, four presentations to shared-governance bodies, and several to the regents that also involved participation from the public.

“That’s one wave of this that I get a little bit frustrated with — that, quite frankly, that we somehow think that this has been too fast. It’s been a year-and-a-half,” Harreld told reporters after the regents approved the deal, in regard to the perception that the process lacked transparency. “Stop it.”

In an op-ed, Iowa Freedom of Information Council Executive Director Randy Evans wrote that secrecy in the UI’s decision-making process has made the UI seem less like a public entity and more like a private school.

As proof, Evans pointed to the UI’s refusal to share certain information with the public before the Tuesday regents’ meeting, including its proposal request to prospective bidders, the four bid finalists, and the total upfront lump sum a partner would pay, as well as the deal’s terms of agreement.

Evans said a lack of transparency in the public/private partnership transaction contradicts Iowa “sunshine” laws, which call for uninhibited examination of government records in the public interest.

Government employees at different levels — school superintendents, city administrators, and city councilors, among others — would be “chased out of office” if they treated local constituents like the UI and the regents treated Iowans with the pursuit of this proposal, he said.

“… The next time important issues arise at the state universities or come before the regents, officials need to remember that they are acting on behalf of the citizens of Iowa,” Evans wrote. “There must be more and better transparency — before decisions are made.”

UI officials have said this process was legal and in compliance with Iowa Code. Chapter 26 (9) of the code states, “A governmental entity shall not require a potential bidder on a public improvement to provide any information which the potential bidder may deem to be confidential or proprietary as a requirement for being deemed a responsive, responsible bidder.”

Richards said two regents meetings will take place over the next couple of months, which will allow for public comment. The governing board expects to hear from people at those times.

The regents have participated in a minimum of 20 or 30 meetings themselves, he added. Calculating in the private decisions and meetings the regents held with affected groups, Richards said the total is probably in the 100s, “so there has been public comment.”

All details about the partnership are available on the regents’ website, Richards said.

“This contract, which is extremely complicated, is over 2,000 pages long,” Richards said. “You can read it and look at it and decide whether we have been thorough about our process.”

Editor’s note: The Daily Iowan has learned the woman who was initially unidentified is State Sen. Claire Celsi, D-West Des Moines, a member of the Government Oversight Committee.