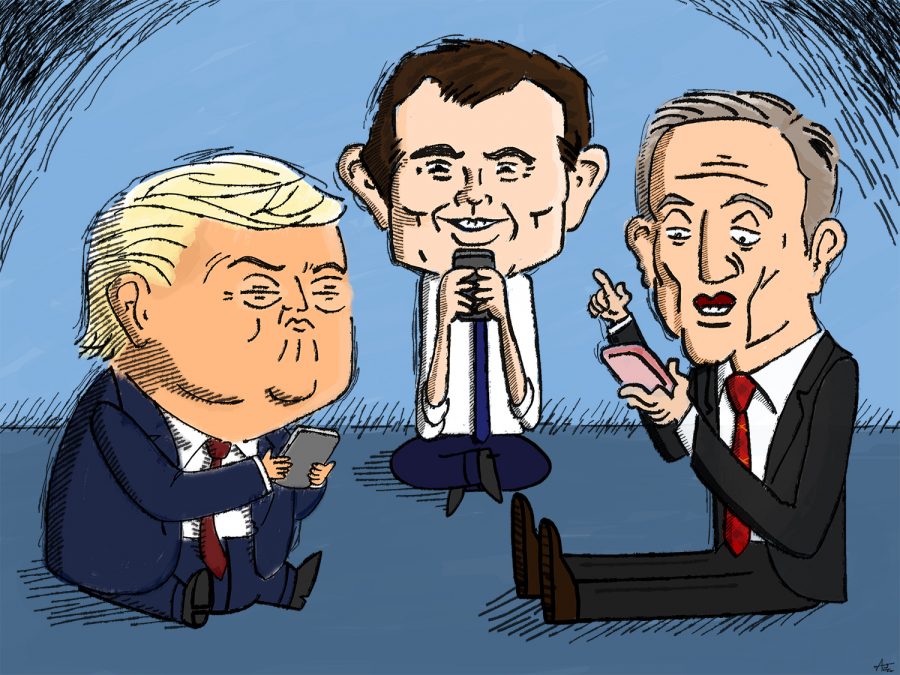 “I really hate YouTube video ads. I hate them,” he said in an interview at a debate watch party for South Bend, Indiana, Mayor Pete Buttigieg on Nov. 21. “Because I’m trying to watch my YouTube videos, and you know, I’m tapping that five-second skip button, and it just takes forever.”

McMillan’s experience is the result of presidential campaigns — both Democratic and Republican — spending a bulk of their money on digital advertising. Travis Ridout, a professor of government and public policy at Washington State University, said campaigns are spending significantly more on digital advertising in this cycle than in the past. Ridout works on the Wesleyan Media Project, a blog that analyzes and reports on political advertising.

Digital spending is dominating the 2020 primary season, with spending from candidates and PACs as of Nov. 16 at just over $98 million since the beginning of the year, according to a report from the Wesleyan Media Project.

The report tracks campaign spending on Facebook and Google, the primary recipients of digital advertising dollars.

Advertising is especially prevalent in Iowa, which will hold the first presidential-nomination contest in the country with its Feb. 3 caucuses. Along with digital advertisements targeting Iowans, spending on TV advertisements is higher in Iowa than in any other state to date. As of Nov. 22, about $17.1 million had been spent on TV advertisements in Iowa by candidates since the beginning of the election cycle, according to data from Kantar/Campaign Media Analysis Group compiled by FiveThirtyEight.

Most candidates have poured the largest share of their advertising budget into digital advertising. President Trump leads the pack with $26.4 million spent on Facebook and Google advertisements nationwide since the beginning of the year, according to the report. Steyer, Buttigieg, and Warren were the biggest digital spenders on the Democratic side.

One presidential hopeful who has gone against the trend and focused heavily on TV advertising is Steyer, who has blanketed the airwaves — including in Iowa — with an estimated $36.4 million spent on TV advertisements nationally, while spending $13.8 million on Facebook and Google advertisements as of Nov. 16, according to the Wesleyan Media Project. Steyer had spent about $7.2 million in Iowa alone as of Nov. 22.

By Nov. 16, Steyer was spending more than twice as much on TV advertisements than all other candidates combined. The other candidates spent a combined $16.7 million on television advertising, according to the project.

Online advertising can also be used to encourage people to register to vote and get involved in campaigns, Ridout said. Total spending on digital advertising was higher than on print advertising as of Nov. 16, but Ridout said he expects TV spending to eclipse digital as caucus and primary dates draw closer and candidates focus more on bringing voters out to the polls.

“You really see that TV ramp up right before people are voting, so I do think it will surpass digital at some point before the end of the primary season,” he said.

David Redlawsk, a professor of political science at the University of Delaware who wrote the book Why Iowa? on the Iowa caucuses, said digital and TV ads are aimed at different demographics. During this fall semester, Redlawsk is teaching a course on the Iowa caucuses at the UI.

Campaigns can use the wealth of data available on potential voters and caucusgoers to tailor ads to a specific digital-user profile, Redlawsk said.

“It’s hard to talk about social media without talking about the idea of big data as well,” he said. “Part of what’s going on here is campaigns just have a lot more information about voters … which suggests almost that they are beginning to be able to target not just groups, but almost individuals.”

Online political advertising has been a focus of criticism in recent months, with platforms taking drastically different approaches to advertising. In October, Facebook said it would not fact-check political ads it received, citing free speech concerns.

Redlawsk said while digital presence and advertising has been increasing since 2008, it’s hard to tell if paid online exposure has overtaken face-to-face retail politicking in persuasive power, especially when it comes to the Iowa caucuses.

Redlawsk found in his research that in the early stages of the 2016 caucuses, more prospective caucusgoers said they became familiar with the candidates through online ads and social-media posts, rather than actually seeing candidates in person. When caucus day came, however, the majority of people that caucused had participated in in-person events.

“By the caucus day in 2016, for both parties, the real-world activities, the going- to-candidate events, the signing commitment cards, catch up with the online social-media activities,” he said.

Iowa has seen a record number of visits from candidates in the 2020 election cycle, with the Des Moines Register’s caucus candidate tracker reporting over 1,600 public visits this year.

In the Des Moines Register/CNN/Mediacom November Iowa Poll, 46 percent of poll respondents said they had attended a candidate event, while 22 percent said they had had a personal interaction with a candidate. The poll of 500 likely caucusgoers, conducted by Selzer and Co., was taken Nov. 8-12 and has a margin of error of plus-or-minus 4.4 percentage points.

Redlawsk said it’s unclear whether social media will be more of a contributing factor in caucus results in 2020.

However for some Iowans, digital ads prompt them to interact with candidates in person.

University of Iowa sophomore Colton Vanderheyden, 19, said he was inspired by advertisements he saw for Elizabeth Warren on YouTube, Twitter, and Facebook to attend her rally in the IMU on Dec. 2. Vanderheyden said he’s still unsure whether he will caucus or who he will support, but said he’s more likely to caucus after attending Warren’s event.

Vanderheyden said he doesn’t get annoyed by political ads and sees them as a way to become familiar with the candidates.

“I understand that because they’re trying to become the president of the United States that they need as much exposure as possible,” Vanderheyden said. “It’s kind of just interesting to hear what they have to say, and it gives you a chance to see what their viewpoints are on certain topics.”