By the Numbers: USC Trojans

Although the USC passing attack is one of the most explosive in the Pac-12, the team has struggled with turnovers in 2019. 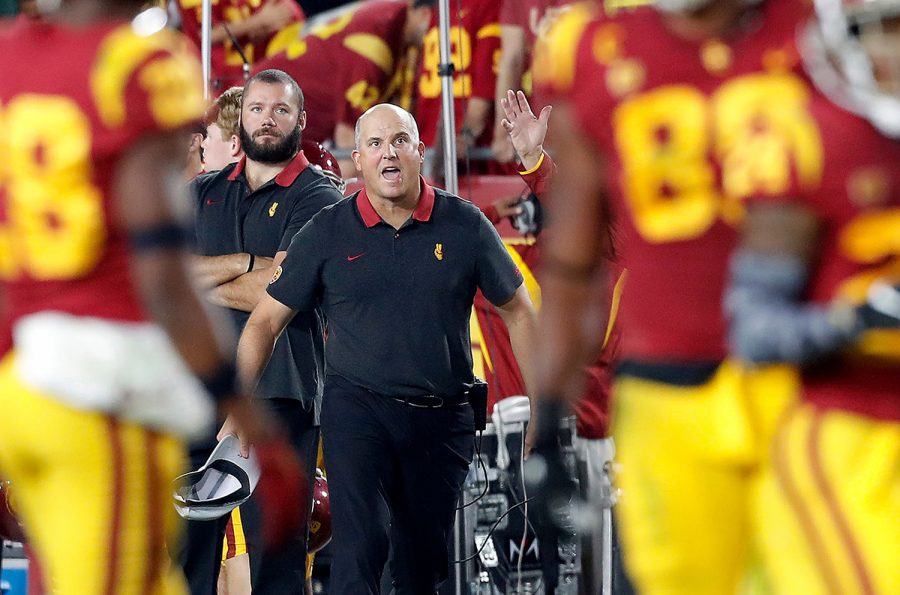 USC head coach Clay Helton reacts after yet another personal fopul call against the Trojans in the second quarter at the Coliseum on Saturday night, Nov,. 2, 2019. USC will face Iowa in the Holiday Bowl. (Luis Sinco/Los Angeles Times/TNS)

In its matchup with USC in the Holiday Bowl, Iowa will be tested in new and interesting ways.

The Trojans rely heavily on its passing game and have outstanding receivers to show for it, but the Hawkeye defense has been solid at producing turnovers and taming explosive plays so far.

Several stats show that the Trojans are vulnerable in the turnover battle but can win if the offense plays a clean game and can remain explosive.

Michael Pittman Jr. has certainly been the go-to target for quarterback Kedon Slovis this season for the Trojans. Pittman leads Southern California by a wide margin in reception yards on the year with 1,222, which also puts him at No. 6 among all FBS teams in individual receiving yards.

Moreover, his numbers have been even more impressive when facing quality opponents. Pittman has 444 yards and three touchdowns in his team’s matchups with top-25 teams, and his 13.9 yards per reception in those games is higher than his 12.9 average yards per reception through the year as a whole.

In USC’s landmark win over No. 10 Utah on Sept. 20, Pittman came to play. He gained a season-high 232 reception yards on only 10 receptions for an average of 23.2 yards per catch.

Even more impressive is his ability to take care of the ball given his high usage rate. His 7.9 receptions per game make him the fourth-most used receiver in the FBS, and he still has yet to fumble on the year.

The Trojans allow an average of 415.4 yards per game. The number is actually pretty favorable compared to other Pac-12 teams — the team ranks sixth in its conference in total defense.

On the flip side, Iowa has allowed over 100 yards less per game than the USC defense. Iowa hasn’t competed against a comparable air-raid type offense that the Trojans run other than Purdue, so pitting Michael Ojemudia and Geno Stone against the likes of Pittman and Slovis will be an interesting test for the Hawkeye secondary.

Of course, teams just play differently out west. But if you inserted the Trojans into the Big Ten, they would rank 10th in defensive yards per contest — just ahead of Rutgers and right behind Illinois.

Slovis­ — just a freshman — has been undeniably effective at quarterback this year for the Trojans. He’s completing just over 70 percent of his passes in an offensive scheme that relies heavily on the air attack, and he ranks third in the Pac-12 with 28 touchdowns.

While the passing game has been explosive for USC, a hindrance on its offense has been in turnovers. The Trojans rank No. 114 in the country in turnovers lost on the season with 23 given up on the year.

A big problem in this has come with running backs, who have lost the ball for the offense nine different times this season. This could potentially be a problem for the Trojans, considering Iowa has taken care of the ball and lost only five fumbles so far.

Additionally, Slovis has taken most of the snaps for the offense and has a favorable touchdown-to-interception ratio of well over three, but the remainder of the quarterback corps has shown weaknesses in this area, putting up only a single touchdown for every interception.

The Trojan defense has typically struggled in forcing turnovers and sits at minus-seven in turnover margin so far this year. If it can play a clean game while remaining explosive, it stands a decent chance against Iowa in San Diego.